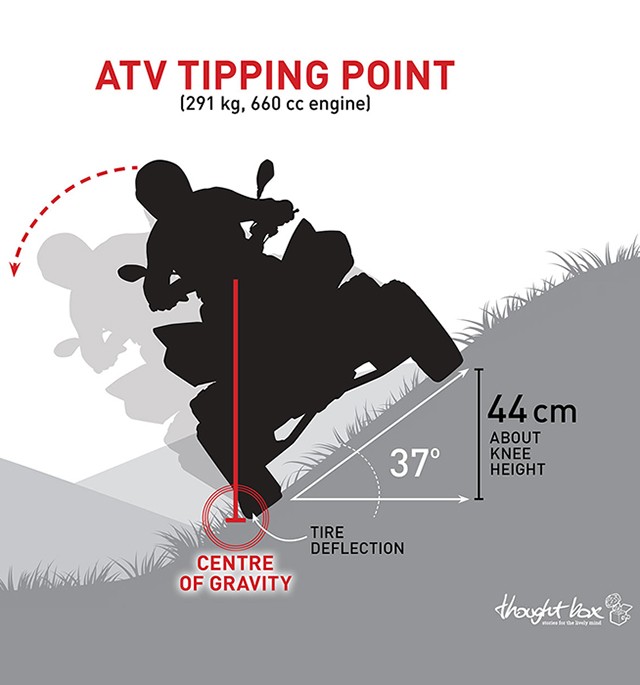 The point at which an all-terrain vehicle tips over is about 37 degrees, or 44 cm off the ground. (Illustration by Christine Pearce)

While all-terrain vehicles may look stable, their tipping point is lower than many people expect. (Photo: Shutterstock)

Denise Pelletier never could have imagined that as an adult she would have to learn to walk, talk and read again. But a disastrous all-terrain vehicle (ATV) accident left her with a traumatic brain injury—one she continues to struggle with 16 years later.

“My brain doesn’t work the way it used to,” she said. “A brain injury is a lifelong injury.”

Pelletier survived, but many have not: 185 people died in quad-related accidents in Alberta between 2002 and 2013. That’s an average of 16 deaths per year. Those killed ranged in age from one to 86.

“People look at ATVs and they look like stable, spongy-tired vehicles, but they’re not necessarily that stable,” said Don Voaklander, director of the Injury Prevention Centre, part of the University of Alberta’s School of Public Health. “Then they take them onto terrain that inherently puts you into instability risk.”

As with Pelletier’s accident, more than half of the 185 deaths were caused by quads flipping or rolling over, and 41 per cent involved head injuries. More than three-quarters of those who died of head injuries weren’t wearing helmets. A new law, which took effect in Alberta on May 15, now requires helmets to be worn by those operating, riding or being towed by ATVs, motorcycles, dirt bikes, snowmobiles and other off-highway vehicles on public land and roadways.

Most ATV users would be surprised to learn just how easily the machines tip over, said David Checkel, a UAlberta professor emeritus and a mechanical engineer. Checkel’s research on the tipping points of ATVs has been used for an Alberta fatality inquiry and featured on CTV’s W5 to highlight the dangers of the vehicles.

The tipping point is the angle at which a line straight down from the centre of gravity (the point where all the weight is concentrated) falls outside the ATV’s track (or the space between the outside of one tire and the outside of the opposite tire). The machine tips over at this point because there’s nothing beyond the lower wheel to keep it from rolling.

Using a tilt table and a 291-kilogram ATV with a 660cc engine, Checkel’s practical test—which considers what happens to the tires and suspension as the machine tilts—shows the tipping point to be 37 degrees. That’s about knee-height, or 44 centimetres from the ground.

If an ATV were driving along a gently sloped ditch, with two tires moving along the ditch and two moving parallel higher up the slope, the lower tires would squish and the suspension would become unbalanced and thus more tippy. Adding a load (rider, passenger, tool box) or dynamic forces such as turning can make the ATV tip at an even shallower angle. And, as an ATV tips, it accelerates into the tip unless the rider knows how to lean and correct the steering.

“The ATVs I tested met or exceeded the safety criterion, but that doesn’t mean they won’t tip over,” said Checkel, who recommends people take a safety course before operating an ATV.

“I went to buy a chainsaw and had to go through a safety briefing before buying it. Why wouldn’t we do that and more with ATVs? The injuries can be life-changing.”

That’s certainly true for Denise Pelletier, who says she’ll never forget what she went through.

“The doctors have no medical explanation to how I survived,” she said, adding that she no longer engages in activities she feels will risk another head injury. “I always joke that the brain is like an egg: you only scramble it once.”

7 Tips to a Safe Ride

If you’re heading out on the trails this August long weekend or later this summer, the Injury Prevention Centre has some important tips to keep you safe on an ATV.