Too hungry to study 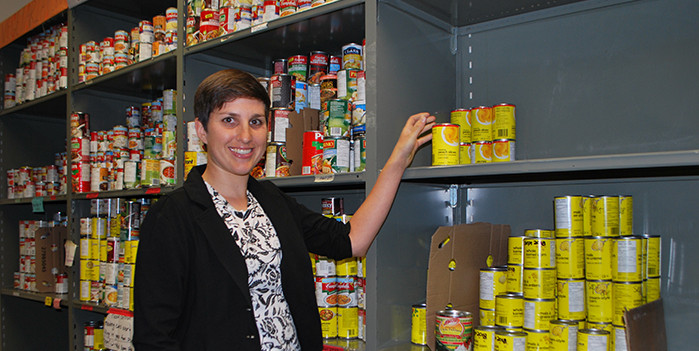 MSc nutrition graduate Jasmine Farahbakhsh co-authored a study with community nutrition researcher Noreen Willows that found that almost half the users of the Campus Food Bank ate so little, it affected their physical and mental health, and their academic performance.

Some University of Alberta students are trying in vain to study because they’re hungry and simply don’t have enough money for food.

More than 90 per cent of the students who participated in a small-sample survey about their use of the Campus Food Bank were moderately or severely food insecure, with almost half described by a researcher as potentially dealing with “abject hunger” because they fall into the latter category.

A lack of funds for food particularly affected students from low- and middle-income families, international and Aboriginal students, and students with children.

“Even short-term food insecurity has long-term implications on health and well-being, and it doesn’t contribute to students performing at their best. And shouldn’t they be?” she asked.

Fifty-eight food bank users participated in the study but even in such a small sample the findings point to the need for a frank discussion on how to make university more affordable, said Willows.

During the 2013-14 academic year, when the study occurred, the Campus Food Bank fielded 73 requests for food hampers each month and served a total of 1,176 people.

While moderate food insecurity means a compromise in the quality or quantity of food, severe insecurity means drastically reduced food intake or missed meals, and that affects physical and mental health, as well as academic performance, said Willows.

Indeed, in a companion, not-yet-published study that looked more closely at the one of the largest groups of campus food bank users — international students — the comments researchers collected are disturbing.

“Students talked about hunger so severe they would shiver because of their low body temperature, about their inability to study for exams and to complete assignments because of their hunger,” said Willows.

International students have singular vulnerabilities, she added, because they pay higher tuition fees, yet are limited in how many hours they can work while in Canada. Meanwhile, 24 per cent of those surveyed had children in their care, “so probably the parents were students going hungry so their children didn’t,” said Willows, citing previous research that says that is typical behavior.

The initial study, which surveyed food bank users through a validated tool called The Household Food Security Survey Module, found that students cope in myriad ways. Strategies included applying for loans, trying to get part-time jobs or seeking more hours at the jobs they held, purchasing food by credit card, and pawning their possessions.

“Some strategies, like buying on credit, made them even more food insecure, because now they have high-interest credit cards to pay off,” Willows said.

Since users of the U of A’s campus food bank are restricted to one food basket every two weeks, and the food they receive is only enough to only last four days, 27 per cent said they drew on multiple emergency food charities and soup kitchens. Five per cent of the students said they stole food.

The study was published in the Canadian Journal of Diabetic Practice and Research.

Too hungry to study
Newsroom