Too much screen time associated with behavioural problems in preschoolers

Organized sports, quality sleep identified as factors to help diminish effects of too much screen time. 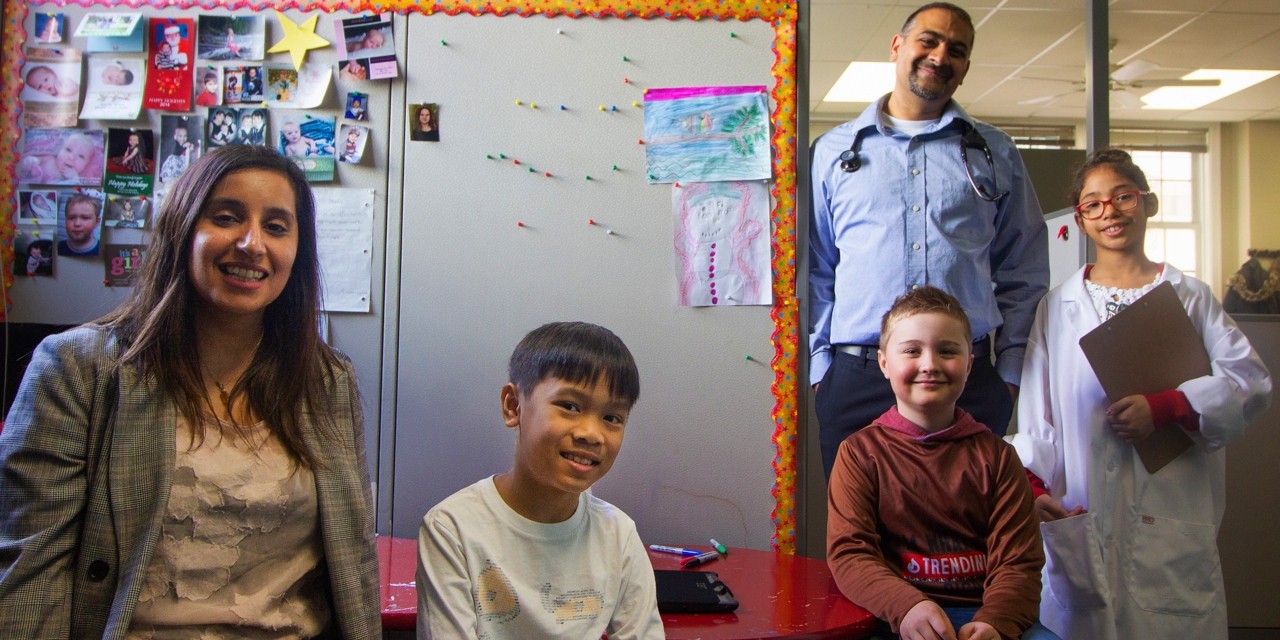 U of A researchers Sukhpreet Tamana (left) and Piush Mandhane with youngsters in the CHILD Cohort Study. The researchers found that preschoolers who had more than two hours of screen time a day were significantly more likely to have behavioural problems by age five. (Photo: Faculty of Medicine & Dentistry)

A new Canadian study of more than 2,400 families suggests that among preschoolers, spending two hours or more of screen time per day is linked to clinically significant behavioural problems.

Compared with children who had less than 30 minutes per day of screen time, children who were exposed to more than two hours of screen time per day were five times more likely to exhibit clinically significant “externalizing” behavioural problems such as inattention, acting out, hyperactivity and being oppositional; and over seven times more likely to meet the criteria for attention deficit hyperactivity disorder.

“We found that screen time had a significant impact at five years of age,” said Piush Mandhane, an associate professor of pediatrics in the University of Alberta’s Faculty of Medicine & Dentistry who led the study published today in the journal PLOS One.

“Current Canadian guidelines call for no more than two hours of screen time a day at that age. But our research suggests that less screen time is even better,” he added.

The research used data from the CHILD Cohort Study, a national survey collecting a wide range of health, lifestyle, genetic and environmental exposure information from nearly 3,500 children and their families from pregnancy to adolescence. Mandhane leads the Edmonton site of the CHILD Cohort Study.

The study also assessed child behaviour and attention at age five by having parents complete the Child Behavior Checklist (CBCL), a screening measure for a variety of problems such as anxiety and depression, emotional reactivity, inattention, aggressiveness and sleep disturbances.

“Prior to this, there weren't a lot of data out there that asked the questions, ‘How much is too much? Are the guidelines appropriate? Ultimately, will limiting screen time in preschool years have benefits for a child’s development?’ This study gives parents some of those answers," added the study’s lead author Sukhpreet Tamana, a post-doctoral fellow in the U of A’s Department of Pediatrics.

“The two big takeaways from this study are that children exposed to more screen time, at either age three or five years, showed significantly greater behavioural and attention problems at age five, and that this association was greater than any other risk factor we assessed, including sleep, parenting stress and socioeconomic factors,” said Tamana.

The researchers also identified factors that provided protection from the negative effects of screen time. Good quality sleep had a small impact, and participation in organized sports was found to have a highly significant protective effect.

“Interestingly, it wasn’t physical activity on its own that was protective; the activity needed to have structure,” said Mandhane. “And the more time children spent doing organized sports, the less likely they were to exhibit behavioural problems.”

“A lot of the things that you do through organized activities are really important for young kids early on,” noted Tamana. “It sets the stage for development amongst children. I think in lieu of screen time, it would be beneficial for parents to increase opportunities for other structured activities instead.”

The study did not determine whether the media content itself or screen type were important predictors of behavioral problems, though the team plans to examine those questions more fully in future research.

And though the researchers suggest “less is more” when it comes to screen time among preschool-aged children, they do not advocate for eliminating it entirely.

“Our data suggest that between zero and 30 minutes a day is the optimal amount of screen time,” said Mandhane. “The preschool period is an ideal time for education on healthy relationships with screens, and we believe our data show that you can't start too early.”

—with files from Kim Wright

Too much screen time associated with behavioural problems in preschoolers