Too much sodium may rob body of calcium 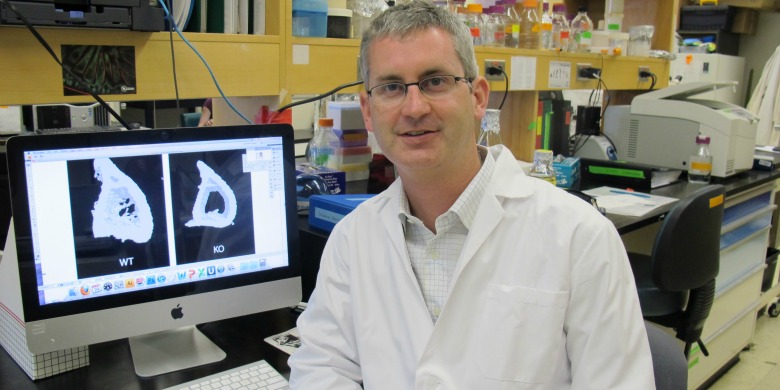 120724-toddalexander-banner
UAlberta researcher Todd Alexander has discovered a link between how sodium and calcium levels are regulated in the body.

(Edmonton) The scientific community has always wanted to know why people who eat high-salt diets are prone to developing medical problems such as kidney stones and osteoporosis. Medical researchers at the University of Alberta may have solved this puzzle through their work with animal lab models and cells.

Principal investigator Todd Alexander and his team recently discovered an important link between sodium and calcium: both appear to be regulated by the same molecule in the body. When sodium intake becomes too high, the body gets rid of sodium through the urine—taking calcium with it, which depletes calcium stores in the body. High levels of calcium in the urine lead to the development of kidney stones, while inadequate levels of calcium in the body lead to thin bones and osteoporosis.

“When the body tries to get rid of sodium via the urine, our findings suggest the body also gets rid of calcium at the same time,” said Alexander, a researcher in the departments of pediatrics and physiology in the Faculty of Medicine & Dentistry. The findings were published in the peer-reviewed American Journal of Physiology – Renal Physiology.

It’s been known for a long time that this important molecule was responsible for sodium absorption in the body, but the discovery that it also plays a role in regulating calcium levels is new.

“We asked a simple question with our research: could sodium and calcium absorption be linked? And we discovered they are,” said Alexander.

“We found a molecule that seems to have two jobs, regulating the levels of both calcium and sodium in the body. Our findings provide very real biological evidence that this relationship between sodium and calcium is real and linked.”

In their research, the team worked with lab models that didn’t have this molecule, so the models’ urine contained high levels of calcium. Because calcium was not absorbed and retained by the body, bones became thin.

A journal editorial about this research discovery noted the molecule could be a drug target to one day “treat kidney stones and osteoporosis.”

The primary funder of the research was The Kidney Foundation of Canada.

“We are proud to support the research of Dr. Todd Alexander,” said Wim Wolfs, national director of research with the foundation. “Data in the United States shows that nearly 10% of adults will have a kidney stone at least once in their life. The prevalence of kidney stones also seems to be increasing in the U.S., which may be attributed to high rates of obesity and diabetes, along with possibly increased salt intake.”

Too much sodium may rob body of calcium
Newsroom