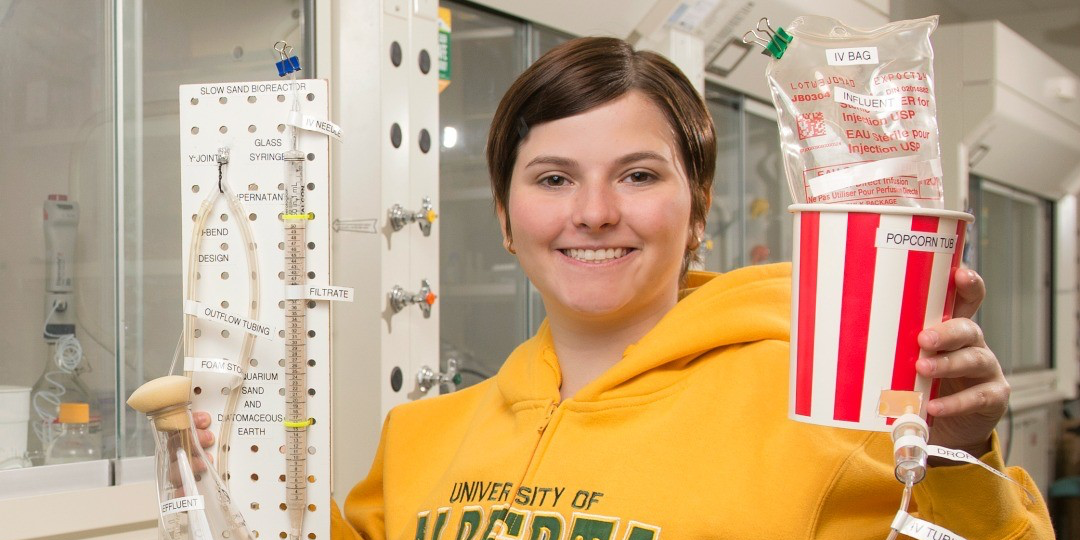 First-year science student Hayley Todesco holds the homemade filter that earned her a win in her age category at this year's Google Science Fair. She also just won the Stockholm Junior Water Prize, and will receive the UAlberta President's Centenary Entrance Citation this week during the annual Celebrate! event. (Photo: Richard Siemens)

(Edmonton) Using bits and pieces picked up at dollar stores and hardware outlets, Hayley Todesco created an oilsands research project that has the new University of Alberta student—and Canada’s only representative—a winner on the world stage in the Google Science Fair.

Todesco won in her age category over four other global finalists Sept. 22, taking home a blue Lego trophy and a $25,000 scholarship, which she can add to her roster of achievements.

The 18-year-old, who is taking first-year classes in the Faculty of Science, is also the winner of the U of A’s $50,000 President’s Centenary Entrance Citation—the university’s most generous undergraduate scholarship—and if that weren’t enough, she’s just won the 2014 Stockholm Junior Water Prize.

She received the prestigious water prize presented by Crown Princess Victoria of Sweden during World Water Week in Stockholm, and considers herself doubly lucky to have also received her U of A scholarship.

“I have endless gratitude to the University of Alberta. This will make the next four years of my life much less stressful.” And with her parents also financing her sister’s post-secondary education, the scholarship is actually helping not one student, but two, she noted. “My family and I are so grateful.”

Todesco is among top faculty, students and staff being recognized at the U of A’s annual Celebrate! Teaching. Learning. Research. event being held at the Myer Horowitz Theatre Sept. 25. Everyone is welcome to attend.

Todesco, who dubs herself on Twitter as a “scientist in training,” is intrigued by the challenge of exploration. “People are naturally curious, and if you want to go into a field of constant discovery, science is the way to go.”

The Calgary native chose to study at the U of A because of its extensive work in oilsands research and discovery. “The university has the same research focus that I do.” She plans to pursue graduate studies and a career in microbiology—an area she believes holds rich potential.

“When you read about scientific discoveries, there are always new types of bacteria doing amazing things. Biotechnology holds a lot of potential.”

It was her own curiosity that launched the teen into her winning Google project, which aims to speed cleanup of toxic compounds generated by oilsands extraction. Using binder clips, a popcorn tub, IV bags and other odds and ends, Todesco concocted her own filters from sand and bacteria. She estimates that the technology could clean oilsands tailings up to 14 times faster.

She believes the project caught the judges’ attention because of its quirky, homemade feel, being applied to solve a high-tech problem. “I think they liked that it was something a kid thought of.”

A veteran of school science fairs for the past eight years, Todesco says the discipline first caught her imagination in a Grade 5 class demonstration, when she saw how soda bottles and sand could be used to create a simple filter for clean drinking water.

The echo of that idea took root for a Grade 11 science fair project, and keenly aware of the environmental challenges facing the oilsands, one of Alberta’s leading industries, she’s been working at the problem ever since, developing the filter.

“It is still unexplored territory. Cleaning the environment is a noble cause, and quite cool when it comes down to the actual science involved.”

Todesco showed her own idea to a panel of judges at Google headquarters in California Sept. 22 (see the results of the Google Science Fair) in a final showdown against four other young rising stars in her age category from the United States, Russia, France and Australia.