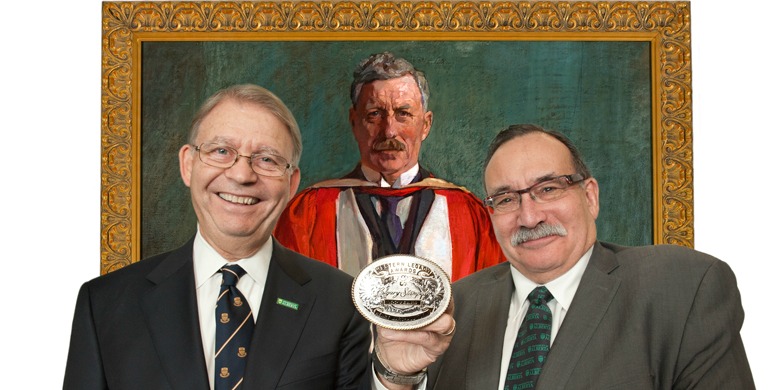 (Edmonton) The pioneering contributions of Henry Marshall Tory, the University of Alberta’s first president, have been honoured in true cowboy style with a belt buckle from the Calgary Stampede, another of Alberta’s landmark organizations.

The richly detailed gold- and silver-plated belt buckle was recently awarded to 100 top Albertans, living or dead, to celebrate the Calgary Stampede’s centennial in 2012. The Western Legacy Awards were given to prominent Alberta politicians, educators, artists, businesspeople and athletes for their contributions in promoting western values and preserving western heritage over the last 100 years.

“When you review the list of Western Legacy Award recipients, you have to feel proud of the Alberta history they represent,” said Paul Valentine, chair of the awards committee, in a news release. “Our province has been blessed with community-minded individuals who have created a better place for all of us.”

The awards honour individuals who have significantly contributed to Alberta through what the Calgary Stampede identifies as western values. These attributes include hospitality, community commitment, integrity and pride of place. Nominees did not need to have a connection with the Stampede.

It is fitting that Tory would receive such an honour, said U of A chancellor Ralph Young, an enthusiast of Western Canadian history. Tory came to the helm in 1908 as the university opened, and during his 20 years leading the U of A, helped build it to prominence as the province’s premier post-secondary institution, Young noted.

“Both the University of Alberta and the Calgary Stampede are iconic to the early formation of Alberta’s dynamic heritage and are still leaders in excellence, building their communities and laying the foundation for the continuing tremendous success and reputations that endure to this day.

“As the university’s first president, Henry Marshall Tory exemplified true Alberta spirit by pioneering one of the top post-secondary institutions that today stands among the best not only in Alberta, but globally,” Young said.

The buckle, engraved with Tory’s name, will be added to the U of A’s museum collection as a treasured piece of history that adds to U of A pride, said vice-provost Ernie Ingles, who attended the awards ceremony and accepted the buckle on the university’s behalf.

“Tory’s place among the Albertans recognized was completely appropriate to the spirit of the award and of the event—individuals who made a difference and upon whose legacy we today build,” Ingles said.

As the keeper of considerable documentation related to the Calgary Stampede, including several postcards in its Peel’s Prairie Provinces archival collection, the U of A continues to preserve Western Canadian heritage, Ingles added.

“Tory would be proud of the library legacy which is now the university’s collections. There is no more fitting example of his desire to uplift the whole people than the success of the University of Alberta Library as it endeavours to preserve the rich heritage of the province.”