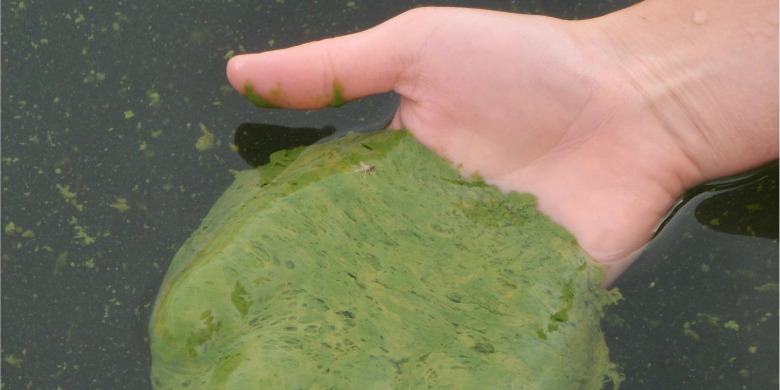 120816-algae-banner
A bloom of blue-green algae on Nakamun Lake in central Alberta.

(Edmonton) University of Alberta researchers have determined that a potent human toxin in summer algae blooms that plague many Alberta lakes is also present in every province across Canada.

In the past, Pigeon Lake, 100 kilometres south of Edmonton, has been closed off to people because of a blue-green algae bloom containing microcystin, a known liver toxin and suspected carcinogen.

U of A researcher Diane Orihel explains that the thick blue-green algae that forms a scummy layer along lakeshores is caused by nutrients getting into the water as run-off from agricultural fertilizers and sewage operations.

Orihel and her team consolidated data on samples from close to 250 freshwater bodies across the country. They found that lakes most at risk have the highest concentration of nutrients, especially lakes with high levels of phosphorus and low levels of nitrogen.

The researchers say that although all regions across Canada have lakes with microcystin levels that are a concern, the highest levels of the toxin were found in nutrient-rich lakes and reservoirs in central Alberta and southwestern Manitoba.

“Canadians enjoying their summer at the cottage need to know that those green scums of algae washing up on their beach are not only unsightly, but can also be a threat to their health and their children’s health,” said Orihel.

Orihel, a PhD candidate in biology at the U of A, was the lead on the research paper published Aug. 14 in the Canadian Journal of Fisheries and Aquatic Sciences.