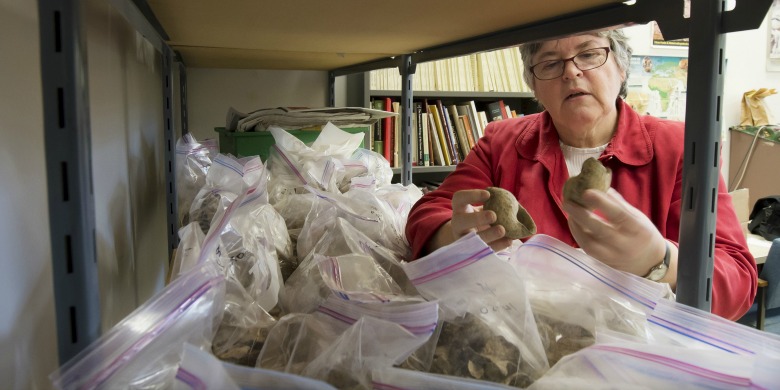 121213-pamelawilloughby-banner
Pamela Willoughby, chair of the anthropology department at UAlberta, is making discoveries in southern Tanzania that could answer questions about when and how modern humans emerged from Africa to colonize the globe. (Photo: John Ulan)

(Edmonton) New research by a University of Alberta archeologist may lead to a rethinking of how, when and from where our ancestors left Africa.

U of A researcher and anthropology chair Pamela Willoughby’s explorations in the Iringa region of southern Tanzania yielded fossils and other evidence that records the beginnings of our own species, Homo sapiens. Her research, recently published in the journal Quaternary International, may be key to answering questions about early human occupation and the migration out of Africa about 60,000 to 50,000 years ago, which led to modern humans colonizing the globe.

From two sites, Mlambalasi and nearby Magubike, she and members of her team, the Iringa Region Archaeological Project, uncovered artifacts that outline continuous human occupation between modern times and as far back as 300,000 years ago, including during a late Ice Age period when a near extinction-level event, or “genetic bottleneck,” likely occurred.

“The idea that you have such ancient human occupation preserved in some of these places is pretty remarkable,” she said.

Willoughby says one of the fascinating things about Magubike is the presence of a large rock shelter with an intact overhanging roof. The excavations yielded unprecedented ancient artifacts and fossils from under this roof. Samples from the site date from the earliest stages of the middle Stone Age to the Iron Age. The earlier deposits include human teeth and artifacts such as animal bones, shells and thousands of flaked stone tools. The Iron Age finds can be dated using radiocarbon, but the older deposits must go through more specialized processes, such as electron spin resonance, to determine their age. Other parts of the Magubike rock shelter, excavated in 2006 and 2008, include occupations from after the middle Stone Age. Taken together, this information could be crucial to tracking the evolutionary development of the inhabitants.

“What’s important about the whole sequence is that we may have a continuous record of human occupation,” said Willoughby. “If we do—and we can prove it through these special dating techniques—then we have a place people lived in over the bottleneck.”

Taking the high road to survival

The team made similar findings at Mlambalasi, about 20 kilometres from Magubike. Among the findings at this site was a fragmentary human skeleton that probably dates to the late Pleistocene Ice Age—after the out-of-Africa expansion but at the end of the bottleneck period. The bottleneck theory explains what geneticists have found by studying the mitochondrial DNA of living people—that all non-Africans are descended from one lineage of people who left Africa about 50,000 years ago.

Reconstructions of past environments through pollen and other archeological records in Iringa suggest that people abandoned the lowland, tropical and coastal areas during that period but remained in the highlands, where vegetation has remained mostly unchanged over the last 50,000 years. Those who moved to higher ground may have found what is likely one of the few places that facilitated their survival and forced their adaptation. Further testing will determine whether these findings point to a clearer link to our African ancestors—a find Willoughby says could put that region of Tanzania on many archeologists’ radar.

“It was only about 20 years ago that people recognized that modern Homo sapiens actually had an African ancestry, and everyone was focused on looking at early Homo sapiens in Europe who appeared around 40,000 years ago,” she said. “But we now know that as far as back as around 200,000 years ago, Africa was inhabited by people who were already physically exactly like us today or really close to being the same as us. All of a sudden, it’s not Europe in this time period that’s really important, it’s Africa.”

Along with its scientific significance, Willoughby’s work may be a linchpin to potential economic growth for the region. Since 2005, when a local cultural officer showed her the sites, she has been sharing information about her research with local citizens, schools and government—opening up opportunities for more research and co-operation. She keeps the region informed of the team’s findings through posters distributed around Iringa, and has asked for and accepted assistance from local scholars. Now the community is also looking for her help in establishing the historic sites as a tourist attraction that will benefit the region.

Willoughby says she feels fortunate to have the support of the Tanzanian people. She tells people it is a shared history she is uncovering, something she is honoured to be able to do. “They’re telling me, ‘You’re putting Iringa on the map,’” she said. “As long as they keep letting me work there, and keep letting the people working with me work there, we’ll be happy.”

Willoughby’s research in Tanzania is funded by the Social Sciences and Humanities Research Council of Canada, the Wenner-Gren Foundation and various funds at the University of Alberta.