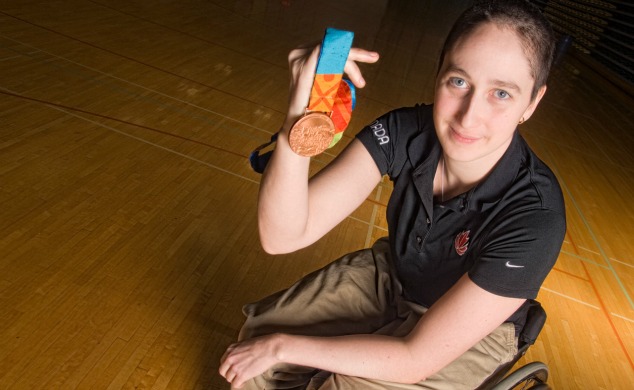 120829-daniellepeers-banner
Danielle Peers, a researcher at UAlberta and bronze medallist at the 2004 Paralympic Games in Athens, says the Paralympic movement could do more to live up to its empowering image. (Photo: Richard Siemens)

(Edmonton) Danielle Peers has lived the thrill and pressure, revelled in competition and brought home hardware from the Paralympic Games. But beneath the cheers, the University of Alberta researcher questions whether the Paralympic movement is as empowering as its benevolent image.

The former Paralympian bronze medallist and women’s wheelchair basketball world champion says the history of the Paralympic movement dates to the freak shows of the 19th century—and even today’s modern games are a spectacle of curiosity that reinforces disability.

“The Paralympics is one of those very few times where we actually have disabilities visible in our culture, where people take notice, but we’re not taking full advantage of the opportunity,” said Peers, a PhD candidate, Trudeau Scholar and Vanier Scholar in the Faculty of Physical Education and Recreation.

“The ways in which we often talk about and show the Paralympics reproduces this idea that disability is a tragic problem in people’s bodies, not a structural problem in our communities. My life and the lives of others I know with disabilities are full of structural difficulties—you can’t find housing, it’s hard to find a job—but our lives are also full of pleasure and joy.”

Peers’ historical analysis of the power relationship between disability sport organizers and athletes, Patients, Athletes, Freaks: Paralympism and the Reproduction of Disability, was published in the August issue of Journal of Sport & Social Issues in the lead-up to the 2012 London Paralympics.

Peers contends the movement avoids criticism and celebrates its able-bodied leaders in the most favourable light, often erasing contributions from athletes.

British neurosurgeon Sir Ludwig Guttmann is often hailed as the “father of the Paralympic movement” for his work at the end of the Second World War, in which he used sport as therapy for veterans with spinal injuries. In fact, his therapies were compulsory, regimented and institutionalized to “rescue these men, women and children from the scrapheap,” as Guttmann put it, and return them to “a life worth living.”

Early competitions were spectacles, with athletes showcased alongside other marvels of science in the tradition of 19th-century freak shows. Later, as competition was co-ordinated by formalized organizing bodies, athletes were differentiated and sorted into classes such as blind or paraplegic under the guise of fairness, which Peers notes further objectified disabilities and impairments and led to a rise in disability sport experts—furthering paternalistic relationships with athletes.

In the 1980s, disability sports such as wheelchair racing were incorporated into the Olympic Games as demonstration sports, but more for curiosity value. Peers pointed to Atlanta in 1996 as evidence of the stark differences in the treatment of athletes.

“After the Olympics closed, the media left, they took down all the signs, the cafeteria did not have enough food, there was no toilet paper for the athletes to use—they just gutted the space and left the Paralympic athletes to fend for themselves.”

When Paralympians threatened to boycott the closing ceremonies, athlete leaders were removed to quell trouble.

“There was a real paternalism and real quashing of any kind of revolt or resistance that the athletes have done to try and improve the games for themselves—the games that they love.”

As the games have grown in size and scope, athletes are not treated as second-class citizens to the same extent as before, said Peers. But in terms of silencing dissent and involving athletes in the direction of their sports, “it’s stayed the same or got worse.”

“It’s only through writing and thinking critically that we have a hope of making changes for the better.”

In addition to her academic studies, films and speaking engagements, Peers runs wheelchair basketball groups in Edmonton. This October she is organizing a conference called (Dis)ability?: Queer and Feminist Perspectives, which will host leading disability, queer and feminist scholars. The conference runs Oct. 18 and 19 and is open to the public.