PhD student explores how digital media can be used to analyze and combat racism. 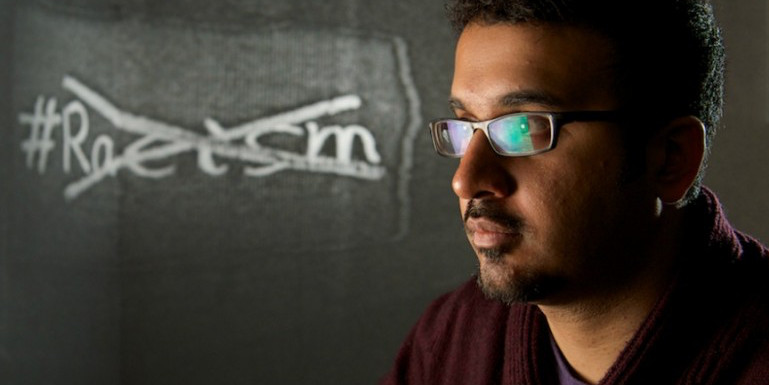 Irfan Chaudhry is looking at the relationship between racist terms on Twitter and the ethnic makeup of major cities across Canada.

(Edmonton) If you’ve ever spent time scanning the comments section of online news stories, you’ve likely seen your share of openly racist remarks—words that are seldom uttered in public settings popping up as a stark reminder that they haven’t disappeared from usage.

The presence of racism in the online world captured the interest of Irfan Chaudhry, who is making it the focus of his PhD research in the Department of Sociology at the University of Alberta.

“Before we had the Internet, we were thinking racism was a thing of the past—we had so many initiatives in place, and we had a really warm and fuzzy feeling about racism being over,” Chaudhry says. “But you go online and you can see it’s not over at all; it’s just moved to a different venue.

“That’s why I feel it’s a really interesting place to start studying. We’re actually able to track just how racist people might be.”

Chaudhry is specifically tracking the use of racist words on Twitter, using geocoding to target a handful of major Canadian cities. For the project’s initial three-month trial last summer, Chaudhry used information from Statistics Canada to choose six cities with high reports of race-based hate crimes.

The results, posted on Chaudhry’s website, The Twitter Racism Project, show a connection between each city’s ethnic makeup and the kind of racist terms being used in tweets originating from those cities. For example, Twitter users in Edmonton and Winnipeg, which both have large Aboriginal populations, were more likely to use negative terms directed at Aboriginal people.

“The demographics of the cities reflect what’s going on online, and that’s the starting point I’m going to be building off of as this project moves forward,” Chaudhry says.

He also wants to analyze whether there is any connection to the real world.

“Are we seeing more chances of victimization? I’m not trying to say there’s a direct correlation with someone tweeting something and the next day going out and punching people of a certain race,” he says. “We can’t make that connection … but we’re trying to get a sense of the online racial climate and how that relates to what’s going on in different Canadian cities offline.”

Chaudhry’s decision to pursue this line of research seems like a natural progression for someone with his background in criminology and race relations. After completing a master’s degree with a focus on criminal justice, Chaudhry spent two years working as a crime analyst for the Edmonton Police Service—looking at crime data from different parts of the city, identifying trends and creating programs to manage the crime in those areas.

At the same time, he developed an interest in exploring how digital media could be used to combat racism, which led him to co-found a Muslim film festival called The Mosquers. “The idea behind this project was to get youth living in Edmonton to use video cameras and YouTube to create a story countering stereotypes and narratives of Muslims being terrorists,” he explains.

When Chaudhry came across what seemed like a tailor-made job opportunity as a race relations specialist with the Racism Free Edmonton project, he jumped at the opportunity to broaden his experience. “My work was focusing so much on the Muslim community up until that time,” he says. “This was taking the same aspects of looking at diversity and inclusion within Canada, but not just focusing on a specific religion.”

A return to academics

Chaudhry had always promised himself that he’d return to school, however, and in 2012 he started his PhD program with the intent to draw on these past experiences for his research. A fortuitous last-minute course change helped to solidify the focus of his current project, when Chaudhry unexpectedly found himself taking a political science course that examined how authoritarian regimes use social media to control their populations.

“It turned out to be the best course I’ve ever taken,” he says. Studying the Arab Spring, for example, and the role Twitter played in mobilizing people and creating awareness of the need for social change, had a huge impact. “It sparked my interest in Twitter as a place to study—not only the online impact, but how it resonates with the offline world. Twitter is a strong space for social progress.”

Chaudhry’s impact is resonating as well—last year he was named one of Edmonton’s “Top 40 Under 40” by Avenue magazine for his efforts to eliminate racism and understand why crime happens in the city.

As his research progresses, he hopes not only to further our understanding in these areas, but also to help pave the way for harnessing Twitter as a valuable academic resource.

“This is a growing field that researchers aren’t using too much yet, but I know in the next three or four years at the most, people are going to realize this is a powerful data collection tool.”