Trade and Turmoil in the Age of Trump

As our closest Western allies turn inwards, where is Canada’s place in the new world order? 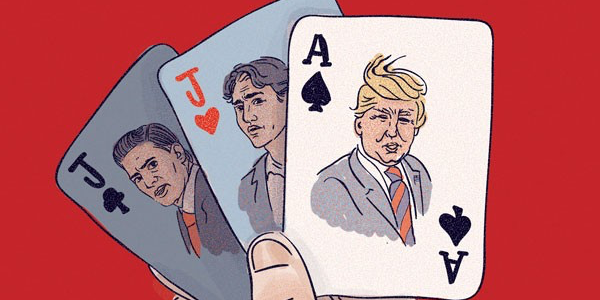 It’s easy to forget, after the tumultuous year that was 2016, the confident denial that preceded each previously unthinkable new development:

“Of course Britons won’t vote to leave the European Union.”

Those disbelievers—from pollster Nate Silver to former prime minister David Cameron to Barack Obama himself—wanted to believe the existing world order would evolve in predictable ways. But with far-right candidates polling strong in 2017 elections throughout Germany, France and the Netherlands, observers who were initially ignorant to the depth of this trend are now keenly aware of the potential global implications of nativist policies heralding a possible end to the western-led economic world order. As Canada’s most crucial economic partner leads a charge against free trade, and we still lack trade deals with China, Japan and India, the country is caught between a closing West and an opening East.

“When the Chinese look at the United States or look at Europe, the credibility is gone,” says Edy Wong, UAlberta associate dean specializing in international business. “They no longer see Europe and the U.S. as having the moral authority to set the system, to set the rules.”

Consider the ill-fated Trans-Pacific Partnership (TPP), an agreement personally championed by Obama as a cornerstone of the so-called “pivot to Asia” designed to define American trade for the next century. It was also intended as a check on China’s dominance, establishing a framework for economic partnerships China would later be encouraged to join.

“China is doing a lot to promote themselves economically,” argues Wong, citing the Asian Infrastructure Investment Bank as a major Chinese initiative to firm up its influence in the region. The TPP would have increased access to huge Japanese markets for our beef, canola and soybeans, but its death, he says, is both a loss for Canada and a win for China. He says it could also motivate an agreement on the Regional Comprehensive Economic Partnership, a Chinese-led free-trade proposal that would affect half the global population, but has been stuck in negotiations for five years.

“By walking away from the TPP, I’m afraid that we’ll have the unanticipated effect of letting China’s influence grow and expand,” agrees former diplomat Greg Bates, BCom ’69. “China says, ‘Thank you very much.’”

“You're not going to win leadership campaigns by touting free trade.”

Bates, whose 37 years with the Canada Trade Commissioner’s Service included posts in China, among other nations, sees the widespread antipathy towards free trade as a popular force that is difficult for politicians to ignore.

“It’s not something that’s politically favourable at the moment. You’re not going to win leadership campaigns by touting free trade,” he says. “Many communities saw their jobs disappear. And, justified or not, they blamed it on free trade.”

From a Canadian perspective, the future of the North American Free Trade Agreement (NAFTA) is more cause for worry. Though the TPP held the potential for enormous trade gains by opening up Japan and other markets, it would not replace the potential losses from weakened free trade with our top trading partner. Yet some of President Trump’s most reliable and well-received campaign rhetoric was railing against the flight of American jobs to other countries, and he has demanded the deal between the U.S., Canada and Mexico be renegotiated.

In order to appeal to his rustbelt constituents, Trump’s administration could create tax incentives that siphon auto jobs from Windsor, Ont., to Michigan, says Wong. “It’s a very challenging time for Canada.”

If Trump’s regime makes good on its protectionist promises, the reality is that Canada has few options available as an economic middleweight highly dependent on export markets, particularly the one we share a border with. If the “elephant” wants to abruptly change direction, we are forced to follow. Last October’s Canada-EU deal, intended to stimulate trade with tariff cuts in sectors such as agriculture and auto, wouldn’t come close to offsetting the potential losses of a renegotiated NAFTA. Total Canada-U.S. trade in 2015 was worth $760 billion—more than double the value of our next 25 biggest trading partners combined.

Trudeau has indicated that revisiting NAFTA doesn’t bother him. But to Bates, it’s unlikely to turn out well for Canada. “What could we possibly gain by opening NAFTA?” he asks. “We should be mounting a great effort to convince the Trump administration that it’s not in their interest to open NAFTA.” Whether the Donald’s stubborn mind could be persuaded by such a campaign—even an amazing campaign, huge, the best—is doubtful.

Still, Bates believes Canada’s best play is at the state level, using consular personnel to remind American officials of how beneficial Canadian trade is to their economies. After all, “Canada is the top export destination for 35 states,” according to the Canadian embassy in the U.S., and Canadian trade supports almost nine million American jobs.

If western leaders are as intent on turning inwards as they claim, Wong sees the potential for a passing of the international baton to emerging powers like China and India. He notes that Australia and New Zealand have signed bilateral trade deals with China, while Canadian politicians have often found themselves caught between our trade needs and our concerns for human rights.

Canada must recognize that it is not important enough to be sought as a partner—we must do our own seeking, he says. “It’s not like we’d be doing China a favour by doing a free trade agreement with them,” says Wong. How well Canada manages to diversify our approach to global trade in the near future may well determine our place in the world for the next century.

Taylor Lambert is an Alberta journalist. He has two narrative journalism books out in September on UAlberta’s School of Dentistry and on the moving industry.

Trade and Turmoil in the Age of Trump
Newsroom