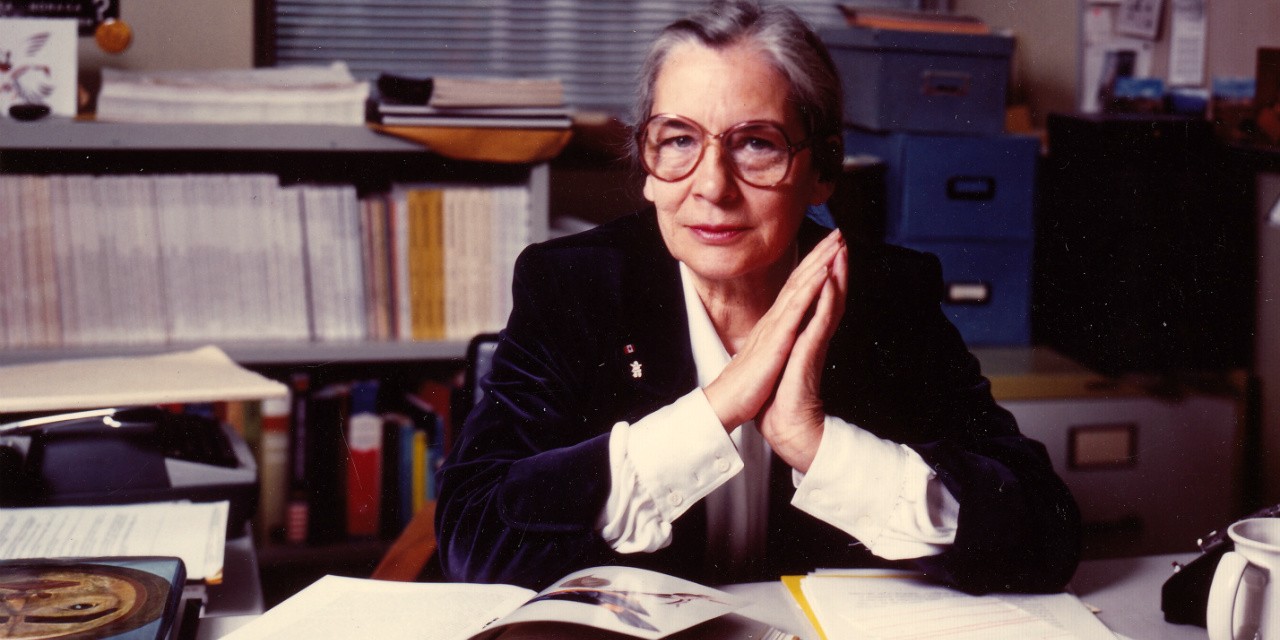 Olive Dickason at the University of Alberta in 1981, three years before the publication of her doctoral thesis as "The Myth of the Savage."

Olive Dickason was 57 when she started her academic career at the University of Alberta, so it’s no wonder she wasn’t ready to retire at 65. After a career spent in journalism, she was now on a mission to restore Indigenous people to their rightful place in Canadian history. She was just hitting her stride.

Dickason fought the university’s mandatory retirement policy after teaching for only eight years, arguing it was tantamount to age discrimination and therefore a violation of her Charter rights. She won her case in the lower courts, but lost by a five-to-four margin in the Supreme Court of Canada and was forced to continue doing research as a sessional instructor. (The U of A finally abolished mandatory retirement in 2007.)

That research, however, would result in one of the biggest breakthroughs in Canadian history. In 1992—the same year the Supreme Court released its decision on mandatory retirement—Dickason published the first written account of Indigenous people in Canada: Canada's First Nations: A History of Founding Peoples From Earliest Times. For the first time, this bestselling work—it’s now in its fourth printing—placed indigenous people front and centre in Canada’s story.

“It was a major, path-breaking resource and it certainly changed the way (people saw Canadian history)," said U of A historian Sarah Carter. “The title alone turned our conventional understanding on its ear.

"She was very notable for her interdisciplinary approach, drawing on archeology, anthropology, linguistics, art and so on, and showing that this is an ancient country."

In the ‘70s and ‘80s, it was widely accepted that Canada had two founding nations, English and French, but Dickason “was the first to really say, there's at least three and perhaps as many as 50 or more,” said Carter. “She was at the vanguard of this."

"Olive sees Canada not simply as a country that was formed from the French European legacy, but beginning with First Nations people,” said retired U of A historian Ken Munro. “She wanted First Nations to have a proper hold in the country as the founding civilization."

Dickason died in 2011. But to recognize her singular contribution to Canadian history, and in response to the Truth and Reconciliation Commission's Calls to Action, the Department of History and Classics will pay tribute to her legacy with an event later this month, including a room dedication and two panel discussions.

“We wanted to celebrate and honour one of our most prestigious colleagues—a scholar who was Métis and who transformed the field of Canadian Indigenous history, since it is the 150th anniversary of Confederation,” said department member Jaymie Heilman.

From high-school dropout to journalist

Dickason was born in 1920 in Winnipeg, the daughter of a British accountant and Métis mother. Falling on hard times, the family was forced to move to the Manitoba bush during the Depression, where Olive learned to fish and trap to stay alive. She left school at Grade 10, but recalled meeting a remittance man in the woods who had once been a classics scholar and who was happy to share his extensive library with her.

"He would spend hours with us, and I was reading Marx and Plato. Even though I had only a Grade 10 education, I could discuss the Greek philosophers and what Marx thought on certain subjects. I was extremely well informed,” she said in the 2003 documentary film, Olive Dickason’s First Nations.

Later, she graduated from the Athol Murray College of Notre Dame with a degree in French and philosophy, moving on to a 24-year career in journalism at the Regina Leader Post, Winnipeg Free Press, Montreal Gazette and Globe and Mail, mainly as a fashion writer.

“So many women interested in journalism and writing were inevitably placed on these women's pages where they were obliged to write about women's topics," said Carter. "I'm not sure whether she enjoyed it or not, but she was probably just so pleased to have a job…. You write what you have to write."

Life wasn’t easy for Dickason during these years. After giving birth to three children and divorcing her husband, she was left financially destitute. She had to give up her children to foster care for seven years until she secured a job at the Globe.

It wasn’t until her twenties, when she met her mother’s relatives, that she finally learned of her Métis heritage, but it captivated her. By her fifties, she was ready to reinvent herself as an Indigenous historian.

It’s hard to believe now, but when she began her doctoral work in 1972, she couldn’t find anyone to supervise her thesis. Again and again she was told there was no such thing as Aboriginal history because none of it was written down. The message was clear—why jeopardize your academic career relying on such a flimsy historical record?

Marshalling her journalism skills, she methodically prepared her case and presented it to the University of Ottawa. “They finally made certain she was able to do it,” said Munro. “But it was a battle, and she could have easily given up."

Getting the green light for the doctoral thesis, however, was just the beginning of her struggle for legitimacy.

"I was absolutely shocked when I got into the classroom and heard these professors talking about the savages and all the good things the Europeans brought them, and how these people were locked in time and hadn't progressed."

Dickason set about gathering native oral histories, combining them with colonizers’ texts in the archives of England, France and Spain. She also examined early contact relationships and exposed the legal framework justifying how Indigenous people would be dominated and exploited.

She discovered a papal bull from 1537 declaring Indians human beings, with full rights to their freedom and property. “In spite of that proclamation, the general politics of the day didn't accord Indians their full rights and considered them to be subhuman," said Dickason.

“It's also very clearly, unequivocally included in Justinian's code, compiled in the sixth century, and was the functioning international principle in Europe—the first occupants of the land are the natural owners of the land. So how did the Europeans get around that?"

Her doctoral thesis supplied the answer—Indigenous people were seen as savages and therefore didn’t qualify for legal protection. Eventually published as The Myth of the Savage in 1984 by University of Alberta Press, that thesis became her first bestselling textbook.

"We were lucky to get her,” said retired U of A historian Rod Macleod, who was on the committee that hired Dickason as assistant professor in 1976. “Olive's work was unique at the time. She was totally focused on rescuing the history of the First Nations from oblivion.

“She transformed the landscape and inspired a whole generation of new scholars."

Of her most important work, Canada’s First Nations, National Aboriginal Achievement Foundation founder John Kim Bell said, "it is one of the few defensible documentations of our true history in this country.”

“Without the academic rigour, and the contribution that Olive Dickason has made, we wouldn't have as much of a leg to stand on as we do now."