Rear-Admiral Jennifer Bennett tells class of 2015 that influencing others' success is a leader's greatest legacy. 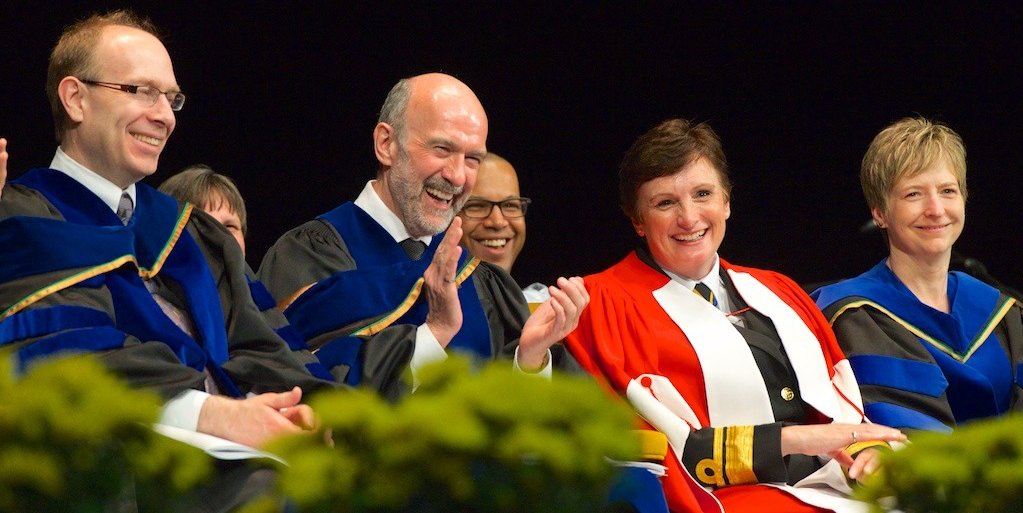 (Edmonton) When Rear-Admiral Jennifer Bennett first became involved in the Canadian Naval Reserve as a high-school student, she wasn’t looking for a career path or lifetime goal. She just wanted something to do for the summer.

“What started as a temporary summer job with no aspirations or goals led me towards leadership opportunities that have taken me across Canada and around the world,” Bennett told graduands from the University of Alberta’s Faculty of Engineering at Tuesday’s convocation ceremonies. “I’ve had experiences that have challenged me and pushed me beyond my limits and I was offered responsibilities and appointments that I never thought were possible.”

Bennett, the Royal Canadian Navy’s first female rear-admiral and Canada's senior ranking reserve officer, said the trail she has blazed for other women in the military came about in part because she was willing to move outside her comfort zone and take on new challenges, even while maintaining a career as an elementary and secondary school teacher and administrator.

“Sometimes you have to take chances and make an opportunity fit for you, rather than the other way around,” she said. “In both my teaching and military careers, when there weren’t jobs in my field, I took other opportunities and tried to build my experience and expertise. It seems to have paid off.”

A native of Hamilton, Ont., Bennett has 39 years of distinguished service in a variety of positions with the Canadian Naval Reserve, including commander of the HMCS Malahat naval reserve division and the Naval Reserve Basic Recruit Training Detachment, director of the Ottawa detachment of the Canadian Defence Academy and director of education policy for the Defence Learning Network. She was promoted to her current rank in April 2011 and appointed Canadian Armed Forces Chief of Reserves and Cadets shortly thereafter. She was recently appointed Commander of the Military Order of Merit, Canada’s highest military meritorious service honour. Tuesday’s convocation saw her add an honorary doctor of laws degree from the U of A to her list of accomplishments.

Bennett has devoted herself to the renewal of the Canadian Cadet Program and to advocacy for the increased participation of women in the military. She said this advocacy has made her aware of the influence she has had—not just on people she’s worked with directly, but also on those she’s never met.

“It is quite humbling and also quite intimidating to know that, through what I was doing and who I was, others were finding their way and could see their success through mine,” Bennett said.

“Never underestimate the power of what you do and who you are. Your legacy and influence go well beyond a job title, rank and official responsibilities—it is how you do things,” she added.

In the end, Bennett said, this “leadership legacy,” and the far-reaching impact of her example and accomplishments, might be her greatest source of pride.

“When I look back to that summer job choice I made 40 years ago, I am proud of my achievements in the Canadian Armed Forces, and of the leadership challenges I have met, but my greatest accomplishment and legacy will be having opened doors to those who will follow or to have contributed to and influenced others’ success, all while maintaining my personal leadership style and sense of humour.”