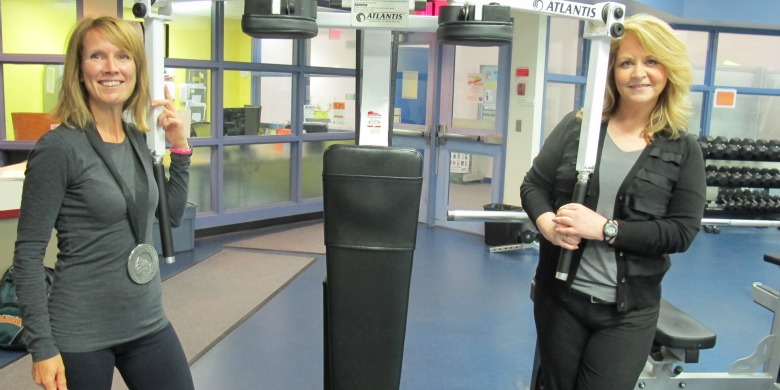 (Edmonton) A local personal trainer has run a 250-kilometre race in the Jordan desert to raise money for brain research in the Faculty of Medicine & Dentistry at the U of A.

Shortly after Mary Nielsen started working at a fitness centre in the U of A Hospital, called the Pulse Generator, the personal trainer’s very first client was Kathryn Todd, a well-known neuroscientist in the faculty’s psychiatry department and senior vice-president of research for Alberta Health Services. Fast-forward six years and the duo is still training together.

Nielsen, whose relatives have experienced depression and dementia, knew she wanted to make a difference but wasn’t sure how. As she listened to Todd’s stories about brain research, Nielsen decided she would take part in an extreme race and donate some of the funds raised to support Todd’s research.

“I thought it would be a nice way to give back to the research she does,” says Nielsen. “I think everyone has been affected by the effects of brain disorders—whether through a family member or a friend.”

Over the last year, people have sponsored Nielsen directly; she has also raised money through a Christmas craft sale, silent auction, raffle baskets and $5 fitness classes she and her colleagues have taught.

In total, she donated $3,000 to the George and Dorothy Davey research fund, which furthers the development of new drugs and ideas that look at how to protect or rescue brain cells from the effects of stroke and other brain disorders. The fund was started by local businessman George Davey, whose wife Dorothy was incapacitated by the effects of a stroke. He was her caregiver for years.

Davey, a personal friend of Todd’s, was passionate about brain research, so he started the research fund through the Faculty of Medicine & Dentistry. He donated more than $1.2 million over the years and through his estate.

Nielsen left for Jordan and the extreme event Racing the Planet in early May. She ran 250 kilometres over seven days, carrying all the supplies she needed in a 25-pound backpack. Most days involved a 40-kilometre trek, but the fifth day’s journey was more than twice as long at 84 kilometres. She ran in temperatures of 30 C during the day. At night, the mercury dipped to 5 C.

“George Davey was at one time the superintendent of Alberta Treasury Branches,” says Todd. “He was a very, very special Albertan and someone who believed in healthy lifestyles. I think he would be so proud and grateful of what Mary has done. It fits perfectly with everything he wanted and everything he believed in. We plan to continue his legacy.”