Thymus could be an abundant source of cells used to supplement or replace immunosuppressive drugs that help prevent organ transplant rejection. 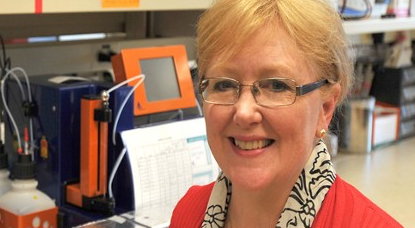 An organ thrown away following children’s heart surgeries may be the key to unlocking a potent source of specialized cells that could soon become an essential tool for the ongoing care of transplant patients.

Each year, pediatric cardiac surgeons perform thousands of heart surgeries in young children around the world. In most cases, the thymus—an organ found in the chest—is routinely discarded as part of the operation. But through the research of pediatric cardiologist Lori West, director of the U of A’s Alberta Transplant Institute, the thymus has been discovered to be a key source for the harvesting of regulatory T cells (Tregs), which according to West, have the potential to one day replace or supplement the immunosuppressive drugs used to prevent organ rejection in transplant patients.

“What would be really great is if we could have an effective way of suppressing the destructive immune responses that didn’t have all the side effects that go along with lifelong medications,” said West. “That’s where Tregs come in. These cells suppress unwanted immune responses and won’t have the toxic side effects of the immunosuppressive drugs that we use.”

Traditionally, Tregs are harvested directly from the bloodstream and the umbilical cord blood. However, their scarcity makes it difficult to accumulate enough Tregs for clinical purposes. According to West, they also lose much of their potency in the collection process. Both problems are not a factor when harvesting Tregs directly from the discarded thymus.

“What we’ve discovered is really very exciting because you get more Tregs from one single thymus than you could get in the entire circulating blood volume of an adult,” said West. “And this is a tissue that is currently thrown away. This is not a rare resource. You could estimate easily that there are tens of thousands of thymuses discarded worldwide every year.”

The thymus is only available from cardiac surgeries involving young children. The organ is active in the body up to adolescence and then shrinks and largely disappears by adulthood.

Several clinical trials are underway testing the use of Tregs harvested from the bloodstream. West anticipates that the more potent thymus-derived Tregs will enter clinical trials in the next year or two. West is currently collaborating with international partners for a study involving babies that need a heart transplant as their first surgery. The team would remove the child’s thymus, perform the transplant and then have the Treg cells harvested from the thymus given back to the baby.

“That would be the most straightforward way to explore thymic Tregs in a first clinical trial,” said West.

Treatment of other autoimmune diseases

While the easiest application of Tregs for cellular therapy is their use in the individual they came from, West sees great potential in banking the cells for future use and then matching them to individuals—much like how organs are currently matched with transplant patients. She also said there is massive potential in using the cells for the treatment of autoimmune diseases such as type 1 diabetes and multiple sclerosis, as well as graft versus host disease in bone marrow transplant patients.

While there is great promise in using Tregs from the thymus, West said questions still need to be answered before the cells can be widely used clinically.

“When you inject them, where do they go? How long do they last? How long do they need to last? Are there potential downsides, potential risks of injecting these cells? Could they become destructive cells themselves? These are all the kinds of things that need to be worked out meticulously,” said West.

“You don’t want to say it is a magic bullet but it has tremendous potential.”

This video outlines Lori West's work in transplantation and immunology. (Video courtesy of the Alberta Diabetes Institute and the Women and Children's Health Research Institute)