First-in-Canada curriculum brings transplant recipients into the classroom to share their experiences with medical students. 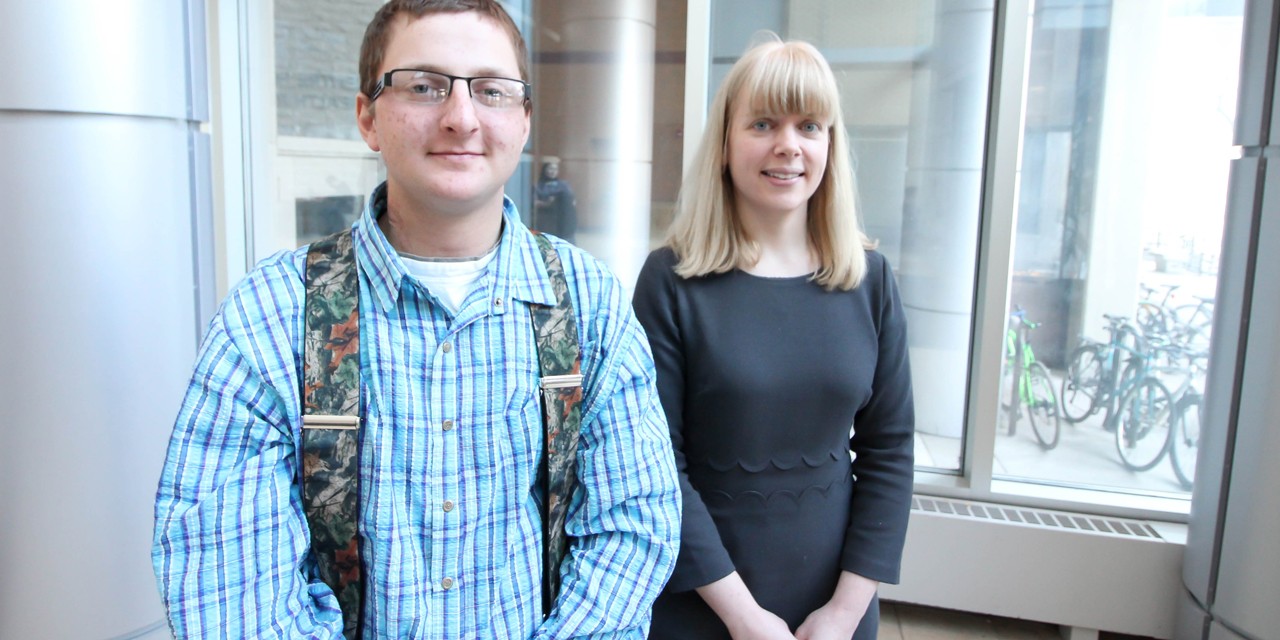 Randy Tschetter, seen here with pediatrics professor Allison Carroll, shared his lung-transplant story with UAlberta medical students as part of one-of-a-kind curriculum that brings transplant patients and their families into the classroom to talk about their experiences with organ donation and transplantation. (Photo by Melissa Fabrizio)

Randy Tschetter was only 14 when he became sick in December 2014.

It started with a bad cough, which turned into chest pains. After a couple of frustrating doctor's appointments, he was admitted to the Valleyview Health Centre and treated for pneumonia but his condition continued to deteriorate. He was transferred to the University of Alberta Hospital in Edmonton.

His mother Katie was not just stressed, she was afraid.

Speaking to medical students in their physicianship course with her son, she recalled one incident when Randy was unable to breathe. She ran to a doctor and told him, “please doctor, you need to come help my son, he’s gasping for air.”

Although the Tschetter’s knew Randy was very sick, they could not have anticipated what happened next. Intubated and unable to breathe, Randy needed a lung transplant.

“It was shocking when they (told me) I wasn’t prepared for it,” recalled Randy. “As I waited, I kept thinking that it wasn’t going to happen, there weren’t going to be any lungs for me.”

But there were and Randy did receive a transplant. This Saturday will mark Randy’s second anniversary for his new lungs.

Though the Tschetters knew Randy’s transplant was necessary to save his life, the family still dealt with feelings of guilt and sadness for the family of their donor. They are forever grateful for the miracle that was given to them.

“If my donor’s family decided not to give their lungs, I wouldn’t have made it,” said Randy.

Katie said it was very hard to know that someone else had to lose a child for Randy to get better, but their doctors were straightforward as they explained the process, and that helped.

Randy isn’t able to do many of the activities he used to enjoy such as welding, operating the combine, or other farm activities where there are dusty conditions, but he has adjusted.

Randy’s mom hopes sharing their story will benefit future transplant patients and believes it will help the budding physicians understand the impact of the care he received. The Tschetters have also made a point to educate those around them on the importance of organ donation and encourage everyone to register as organ donors.

Jessica Luc was one of four members of a group of medical students who contacted the Undergraduate Medical Education office to develop curriculum about transplants that allows for this type of in-class presentation from transplant patients.

She wants medical students to better understand both sides of organ transplantation.

“There are two parts to every transplant: the recipient and the donor family,” said Luc, who is also involved in transplant research. “It’s important for medical students to recognize potential donors and how to talk to the donor family about these big, life-saving decisions which occur at some of life’s most difficult times, at the death of a loved one.

“Although these situations are difficult, the silver lining is that many people can be helped by the generosity of organ and tissue donation by being given the gift of life and health. Education and awareness are key to meet the ever-increasing demand for organ and tissue donation and this can begin at the medical student-level where improved medical education translates to improved patient education.”

Jack Zhang, a first-year medical student who attended the lecture thought the experience was invaluable, saying the lecture was “eye-opening.”

“Nothing can replace the role of a patient mentor, “ he stated. “We can talk about medical knowledge or the evidence behind transplant but it’s never the same after you hear about the journey of the patient and their family, the power in that story cannot be replaced by anything else.”

The Tschetters recounted their story to the medical students thanks to the initiative of Luc, Calvin Tseng, Teresa Li, and Betty Wang who felt that there was not a big enough focus on organ donation in their training and realized it was very unlikely they would ever be involved directly in organ donation. Collaborating with Helly Goez, the physicianship longitudinal themes course coordinator, the team worked to develop the new curriculum.

"The curricular teaching modules are unique across the country, in the way they are systematically weaved to span multiple years of medical school curriculum ” said Goez. “Each one of these new organ donation modules focuses on a specific aspect from evidence-based medicine, through to ethics, social media, ethnic and cultural perspectives."

She believes that students need to understand what it takes for a family to make decisions on invasive therapies like transplantation. According to Goez, listening to patients share their story “opens windows of awareness” and gives the students a new perspective to the person at the heart of the patient-physician interaction.

The curriculum is the result of a collaboration between many different parties, much like the process of an organ transplant.

The village extends beyond the university. The U of A medical student group co-authored a position statement with the Canadian Federation of Medical Students calling to implement a national curriculum across all medical schools.

The students are assessing the results of the new programming and will be presenting the results at the upcoming 2017 Canadian Conference on Medical Education.

– with files from Ross Neitz