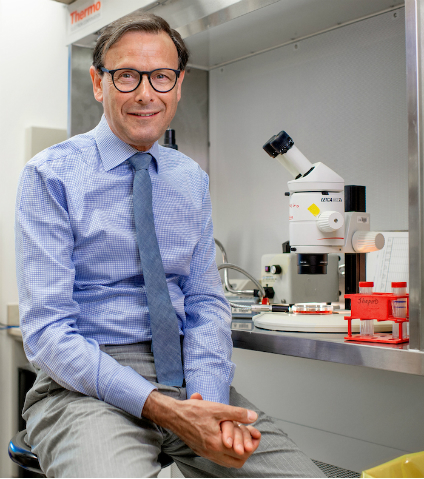 “I’ve had unique opportunities and I feel lucky," says Shapiro of the groundbreaking work that led to his receiving Diabetes Canada's Lifetime Achievement Award. "I did do a lot of things wrong. Maybe that’s why I eventually did it right." (Photo: Richard Siemens)

Edmonton Protocol founder isn’t anywhere close to giving up on research to find a true cure for the prevalent disease. 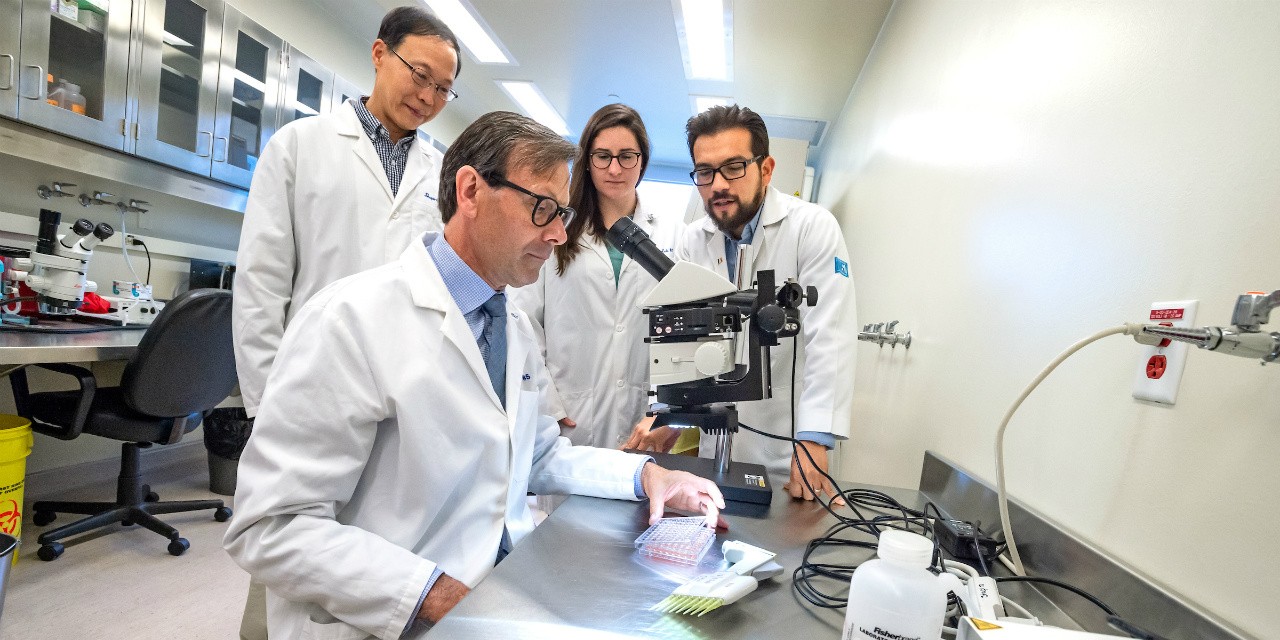 James Shapiro with his team in the U of A's Clinical Islet Transplant Program. Shapiro developed the Edmonton Protocol for treating Type 1 diabetes after performing the world's first human islet cell transplant in 1999. Since then, 626 patients have been treated using the protocol, and the U of A runs the world’s largest islet cell transplant clinic. (Photo: Richard Siemens)

When James Shapiro finished his presentation on a successful new technique he’d developed to treat Type 1 diabetes at the world’s leading transplant conference in July 2000, the young University of Alberta surgeon did not expect what came next: a standing ovation from the audience of 5,000 of his peers.

He also didn’t anticipate becoming the centre of a media frenzy to learn more about this pioneering approach to islet transplantation, or such desperate—yet hopeful—resulting patient outreach.

The news of his islet cell transplant approach spread fast.

“All of it was totally unexpected. It took us by surprise and the world by storm. I came up to the hotel room after the talk and the phone started ringing. The switchboard at the University Hospital was inundated with calls from desperate patients asking to be on the transplant list.”

In fact, the switchboard was choked up for a few days because the calls didn’t stop.

The newly appointed director of the clinical islet transplant program at the U of A had envisioned a different way of transplanting the cells in our pancreas that produce insulin. And the resulting approach—dubbed the Edmonton Protocol—would go on to provide the world a new, successful approach to treating Type 1 diabetes and free up many patients who might otherwise be dependent on insulin injections.

“[Shapiro]’s documentation of diabetes reversal with transplantation cells was tremendously successful and helped to reinvigorate a field that was not blessed with success a lot of the time,” said Bernhard Hering, longtime colleague and executive director of the Schulze Diabetes Institute at the University of Minnesota.

“It established tremendous momentum in research and development in cell therapies for diabetes across the world, and some very focused momentous investment by industry today in the advancement of cell therapy for diabetes, some as large as $100 million. And it would be safe to predict that at this level, it’s likely some of these corporate initiatives will make an even bigger clinical impact.”

So, how did the United Kingdom-trained surgeon find himself standing on that stage—amid flashing bulbs and a deafening roar of appreciation—on the cusp of such phenomenal medical change?

In a single word, failure.

Growing up the son of a family doctor in Yorkshire, England, Shapiro said he would often sit quietly in the corner observing his dad’s practice from the age of four.

“I was fascinated with needles, syringes and sutures, anything that may be squeamish to a patient. I don’t know where that came from. Just that I knew pretty early on I wanted to be surgeon.”

Shapiro was lucky enough to be presented with opportunities that would seem fantastical today—such as stitching up his family’s wounded dog on the kitchen table with his father, or being invited at the age of 16 by a friend of his father’s to assist with several surgeries. “I didn’t faint and it didn’t put me off,” he joked.

Studying medicine at Newcastle University, he learned quickly how competitive surgery programs were and, seeking a way to differentiate himself, found a research project on a topic that compelled him—islet transplantation in rats—under famed surgeon John Farndon, who was head of surgery at Bristol and editor of the British Journal of Surgery.

“In the ’80s, islet transplantation was largely experimental, although some human transplants were being performed in a limited number of centres worldwide,” explained Tom Lennard, a professor of surgery who helped oversee Shapiro’s work. “There was much to do in relation to harvesting viable healthy islets, with a good yield of pure islets and little contamination from other donor cells, preserving them for subsequent transplants to allow time to get the donor ready, and calculating the critical mass of cells for the transplants and the methods of delivery to the recipient.

“Research often throws up more questions than answers, and it is easy to become sidetracked or distracted from the goals of the project. However, James showed determination, focus and logic in his approach to the project—qualities I believe he still has today and which have helped him make the enormous impact in the world of islet transplantation that he has,” added Lennard.

“His innate curiosity and intelligence, coupled with a genuine interest in people and respect of others, made him an easy researcher in the group.”

Though the actual results of all that work weren’t fruitful, Shapiro’s final thesis impressed Farndon so much that he offered Shapiro a job in surgery in Bristol upon graduation. It also fired Shapiro’s passion for islet transplantation—and more importantly, for succeeding at it.

“The thing is, I worked so hard on that thesis. For many studies in it, I slept in the rat house in order to take measurements day and night,” said Shapiro, flipping to page 155 in the hardcover bound, phone-book-sized, hand-typed thesis to point at hourly graphs.

“I felt a bit cheated that I had worked so hard and none of those studies worked. I wanted a second chance at the research.”

That tenacity would drive, in part, his later move to Edmonton in 1993 to join the U of A’s liver transplant team to train with Norman Kneteman. “It was one of the hardest transplants to do,” said Shapiro. The opportunity to work at the university where the groundbreaking islet transplant program had started in 1982 by Ray Rajotte was also a draw.

A passion to succeed

Shapiro’s first six years in Edmonton didn't bring him much opportunity by way of second chances at islet research. But then, just after completing a year of additional fellowship training in Kyoto, Japan, on living donor liver transplants, Shapiro was asked to become the director of the U of A’s islet transplant program.

How could he turn down such an enormous challenge—or as he saw it, opportunity?

“I kept thinking, ‘What I can do for this program, which was all but dormant?’ The last transplant patient had been five years prior.

“By then, there had been 289 islet transplants in the world, and fewer than eight per cent had any good function, including the few done in Edmonton,” he added.

Of course, there were also those failed rat experiments burning away in the back of his mind.

While relaxing one evening in his Baltimore apartment, where he was training in pancreatic transplant surgery, and knowing he was returning to Edmonton, Shapiro “saw” a new way to do islet transplants.

“[Shapiro] has a remarkable and unique talent to see three or four things and connect the dots,” explained Hering. In grossly oversimplified terms, Shapiro devised a way to provide fresh islet cells rather than frozen ones, which was the norm, and thought of a different anti-rejection drug regime, since the existing one all too often killed many of the islet cells.

With the U of A’s Jonathan Lakey in charge of islet cell manufacturing, and Shapiro managing patients and the protocol together with endocrinologist Eddie Ryan, they were ready. Ethics approval in hand, Shapiro performed the first human islet transplant on a northern Alberta teacher, Byron Best, on March 11, 1999.

“His insulin production was immediate, but the number of cells he received was only about half of what he needed. We gave him a second transplant early on to see if we could get him off insulin. That became the routine approach and we did seven more patients the same way,” said Shapiro.

“The data were spectacular. Every single one of those early patients was off insulin.”

They gave their presentation, the results were published to much fanfare, and a much bigger clinical trial was published six years later to help ensure the Edmonton Protocol became a gold standard.

Today, 626 patients have been treated using the Edmonton Protocol, and the U of A runs the world’s largest clinic.

The push for a cure

“It’s been very a humbling and honouring process,” said Shapiro about the work contributing to his lifetime award—though at just 55, he doesn’t feel he’s anywhere near to career completion.

“I’ve had unique opportunities and I feel lucky. I did do a lot of things wrong. Maybe that’s why I eventually did it right,” he said, adding that if he had not spent day and night that year of his first thesis trying to impress his mentor, John Farndon, with results that ultimately did not pan out in the rats, he doesn’t think he would be here today.

“I have to attribute a lot of my early success and perseverance to the late John Farndon. His enthusiasm and determination for me to do well was infectious.”

Shapiro added that most researchers today would not be able to conduct research the way he did. “Honestly, I was pretty naive as a new staff member, and I flew low under the radar.”

Today, he’s hard at work on more than 15 active clinical trials for diabetes cell transplant, placing much hope in stem cell technology. And while patients tend to mistakenly label the Edmonton Protocol as a cure for diabetes, his passion to find a true cure, one in which patients aren’t dependent on anti-rejection drugs, continues to fuel him.

Pinned on his office wall is a hand-drawn picture of a patient in a bed, a wastepaper basket full of syringes, and a doctor with his back turned, staring out the hospital window. It was a gift from an 11-year-old Fort McMurray islet cell transplant patient.

“He drew it of me looking out the window at a time when there is a cure for Type 1 diabetes. It helps me realize that until we have a really robust cure for patients like him, we haven’t done our job.”