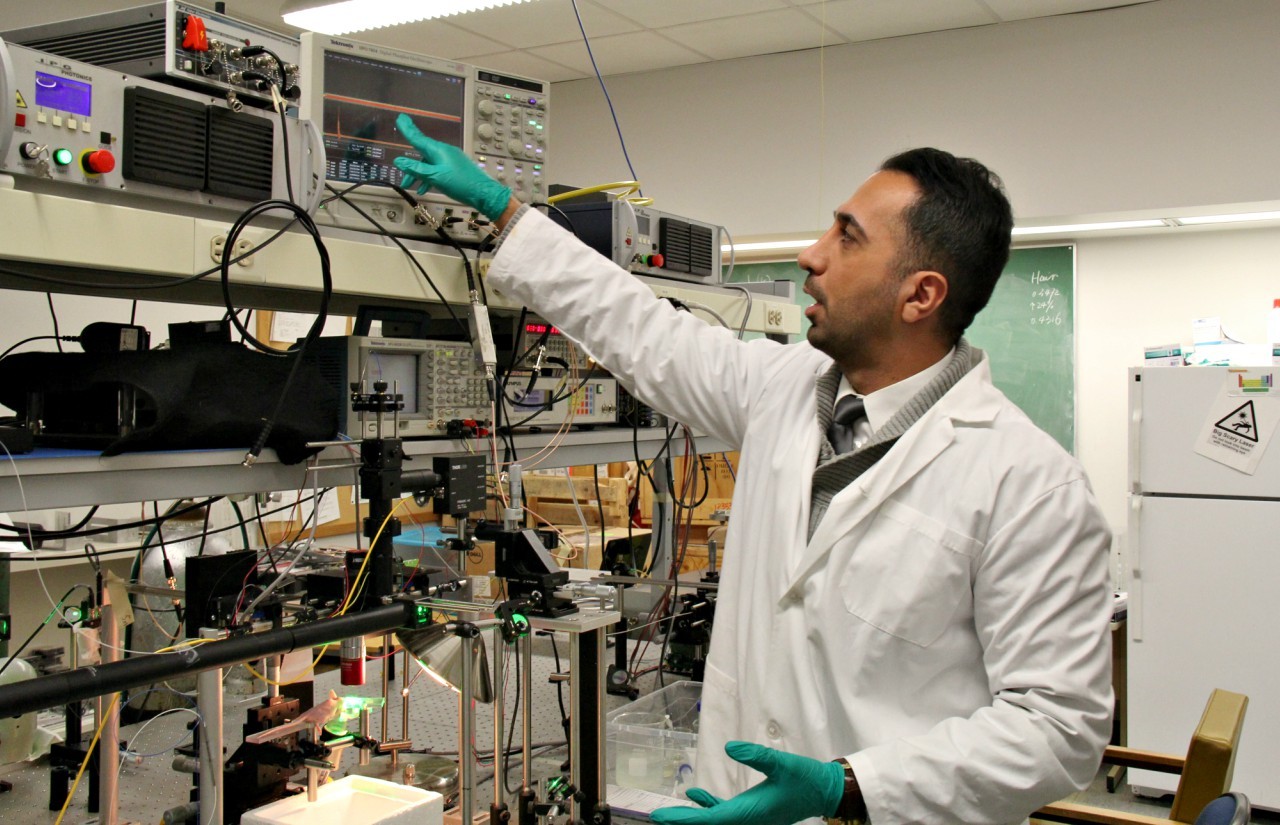 Engineering post-doc Parsin Hajireza, a permanent resident in Canada who carries an Iranian passport, was turned away at the airport check-in counter the morning after President Donald Trump signed the travel-ban order.

Travel ban grounds more than travel to the U.S.

Parsin Hajireza, a permanent resident in Canada who carries an Iranian passport, arrived at the Edmonton International Airport about four hours before his flight to San Francisco.

It was the morning after Donald Trump had signed an executive order denying access into the U.S. by people with passports from Iran, Iraq, Libya, Somalia, Sudan, Syria and Yemen. Hajireza didn’t know what to expect but went to the airport early just in case he encountered a swell in the number of security questions he’d have to answer.

Turns out he didn’t need to answer any questions at all.

U of A president David Turpin issued a strongly worded statement of support for those affected by the ban, emphasizing the institution’s commitment to diversity, inclusion and equity.

The university also waived application fees for citizens of the seven countries affected by the ban who are applying to begin studies in 2017.

The young, up-and-coming University of Alberta engineering research talent, who was heading south of the border for a conference, made it only as far as the airline counter. Upon seeing his passport, the attendant made a quick call to U.S. Customs and then told Hajireza he wasn’t allowed to go to the States. Just like that, he became an early casualty of the Trump administration’s infamous travel ban.

Hajireza, who came to the U of A in 2010 as an MSc student and passed up the likes of Harvard and Stanford to pursue a post-doctoral fellowship in the U of A’s Faculty of Engineering, made headlines just a week earlier for creating a non-invasive medical imaging system for cancer detection, the potentially life-saving device at the heart of Hajireza’s Edmonton-based illumiSonics startup.

His embarrassing tale was one of an estimated 60,000 just like it that unfolded around the world as the ban wreaked havoc on U.S.-bound travellers for a week before it was struck down by a U.S. district judge Feb. 3, a decision upheld by a federal appeals court yesterday. Among the several issues it considered in its decision was whether universities would be harmed by the ban.

At the U of A—which is home to 540 students and dozens of academics with passports from the affected countries—as many as 30 students and researchers reached out to the university looking for information on how the ban might affect flights to the U.S.

While costs of all types—monetary, human and reputation—are still being totalled, one cost that may never be known is the toll the academic community and society pay when the free swirl of ideas is disrupted or halted altogether when conference invitees, such as Hajireza, are kept away.

Lorne Babiuk is a world-renowned infectious diseases expert and the vice-president of research at the U of A. He’s been to hundreds of conferences throughout his career and said these gatherings are the veins that carry the lifeblood of innovation and ideas.

“The audience will challenge you, question you and open your mind to things that you can do that you might have never thought of,” said Babiuk. “If you can’t get to conferences, you become isolated, and I’ve always said, ‘I don’t have a monopoly on ideas.’”

Babiuk said he has hundreds of examples of this co-ordinated happenstance over the course of his career.

His most recent example came two weeks ago while he was at an infectious disease conference in Singapore. He said he was giving a talk when a person in the audience said they were going to test a component of Babiuk’s topic and inquired further about working more closely with him on something the researcher was working on.

“All of a sudden, that expanded the reach of my work. They have the money and the interest, I have the idea and the materials. Conferences broaden you.”

Concern over what this could mean for research compelled U of A oncologist Lynne-Marie Postovit to join the European Molecular Biology Organization’s Science Solidarity List, composed of scientists offering up research infrastructure or accommodation for U.S.-based scientists who were stranded abroad because of the travel ban.

“We have amazing facilities, we are a tolerant international university, and these are people that need to progress their work,” said Postovit. “You think about life-saving research or at least moving forward cancer research, I feel it is important as part of our community to offer help if we can.”

Postovit said conferences provide academics with a pathway to share ideas in advance of the printing of formal publications.

She said this timeliness allows research leaders from around the world to push the work forward, ensure there are no redundancies and form collaborations.

“I know people think of scientists and academics as lone wolves in their labs, but that couldn’t be further from the truth. You have to work well with people to share your ideas, and often that has to be done face to face,” she added.

English and film studies professor Katherine Binhammer was one of 60 U of A researchers and more than 6,000 worldwide to sign a petition calling for an academic boycott of international conferences held in the U.S.

Binhammer has already taken steps to follow through on her pledge, having helped draft a letter addressed to the American Society for Eighteenth-Century Studies, stating that more than 20 members of the Canadian contingent set to travel to the U.S. at the end of March for the association’s upcoming conference will not attend if the travel ban is reinstated.

“This is not a political act against the association, a group we respect and whose intellectual endeavours are an important component of creating a free exchange of ideas, but we personally and collectively could not cross a border that was denied others based on race and religion,” she said.

Binhammer said one of the objects of study of the conference is enlightenment thinking, and the moments of Western democratic enlightenment thought that introduced the importance of tolerance and free speech.

Ironies aside, Binhammer said when the formal and informal circulation of ideas is impinged by a silencing of certain groups, the knowledge that comes out of that is compromised.

“Many of us would feel that it would be against our own personal conscience to benefit professionally from space where others can’t do so.”

—with files from Michel Proulx

Travel ban grounds more than travel to the U.S.
Newsroom