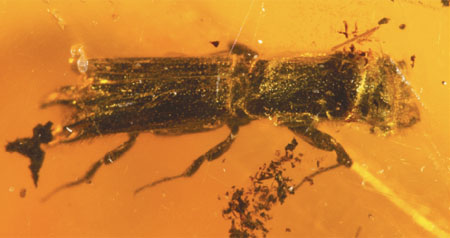 110323-largeformat-treesap
Findings suggest that large quantities of amber may have been produced by ancient infestations of boring beetles.

(Edmonton) A University of Alberta-led research team has discovered that insects that bored into trees as long ago as 90 million years, or as recently as last summer, leave a calling card that’s rich with information.

Research led by U of A paleontology graduate student Ryan McKellar has shown that the information is contained in the resin found within trees and on their bark. Resin is produced in large quantities by a tree when it’s under attack by insects.

Normally, researchers trying to assess if a tree is under attack from boring insects have sometimes had to rip patches of bark off sometimes healthy trees, but McKellar says looking at the resin in and on a tree offers a far less invasive procedure. “Now forestry workers looking for the telltale signs of insect borings in tree trunks can just examine the resin that collects in clumps on the tree trunk.”

An attack by boring beetles typically affects trees in two ways. The boring action damages the phloem layer just under the bark, which cuts off the passage of nutrients within the trunk. Also, beetles often introduce a fungus that spreads into the woody xylem tissue of the tree and starves the treetop of water.

“A side-effect of insect invasion and water stress is a reduction in the tree’s ability to absorb carbon dioxide from the atmosphere,” said McKellar. “Carbon dioxide is necessary for life-sustaining photosynthesis.”

As part of their research, McKellar and the team went looking for subatomic-sized isotopic evidence that indicates water stress in trees as a result of an insect attack. They discovered elevated levels of carbon-13 isotopes in the resin of living trees under insect attack and in the fossilized resin or amber produced by ancient trees that go back as far as the age of dinosaurs. Further, the group found evidence of boring beetles and the increased presence of carbon-13 within amber fossils dating back in the geological record to 90 million and 17 million years ago. The locations are as geographically removed as present-day New Jersey and the Dominican Republic.

McKellar says the New Jersey and Dominican Republic sites are two of the world’s major amber deposits and the discovery will help researchers understand the history of insect infestations in trees.

“These findings suggest that large quantities of amber produced at those locations may have been produced by ancient infestations of boring beetles,” said McKellar. “Mountain pine beetle infestations are the modern equivalent of massive prehistoric insect attacks.”

McKellar’s research was published March 23 in Proceedings of the Royal Society: Biological Sciences.

A giant planet 344 light-years from Earth and the star it orbits have new names in the Cree language, thanks to a national contest. The star HD136418 and its exoplanet HD136418b were renamed Nikâwiy (pronounced NI-gah-wee) and Awasis (pronounced …
Read more from this release

Bullied children are nearly 40 per cent more likely to be diagnosed with mental health issues as teenagers than those who were not involved with bullying, according to research from the University of Alberta and Dalhousie University.  “Bullying …
Read more from this release

New research from University of Alberta cardiologists suggests that treating one of the most serious types of heart attack with clot-busting drugs along with the current primary treatment may lead to better health outcomes for patients. When a …
Read more from this release