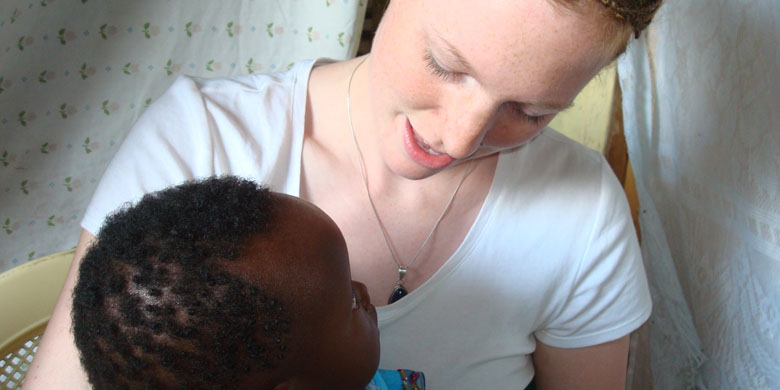 111006-africa-large
Catherine Arkell worked to improve women's postpartum health while on a health internship in Kenya.
(Edmonton) A University of Alberta student in both medicine and public health will soon publish research about how fixing the damage from a labour and delivery complication can change African women’s lives.

This summer Catherine Arkell worked with the African Medical and Research Foundation’s Outreach Program in Kenya. The primary focus of her public health internship, which she did in collaboration with the foundation, examined repairing physical damage from a common post-labour and delivery complication known as vesicovaginal fistula.

It is estimated that more than three million women around the world suffer from this condition, which is caused by labour that is allowed to progress too long, creating an abnormal opening between a woman’s reproductive tract and either her urinary tract or gastrointestinal tract. The baby’s head pushes too long and too hard on a woman’s pelvis, damaging the soft tissues in the area. The tissue later dies and sloughs away, leaving a hole, which often leaks urine or feces.

“After women labour for one day, two days or even five days, the labour usually ends because their babies die,” says Arkell. “In Africa, when you have this condition you are very, very stigmatized. You’re considered unclean; you’re uncomfortable, and a lot of women’s husbands kick them out, or as they call it, ‘chase them away,’ because organ damage is so severe a lot of these women can’t have children.

“In Africa, [child bearing] is a very important role for a woman to have. If you can’t have children, your husband doesn’t want you, so often these women are abandoned.”

Arkell wanted to know if these women’s lives went back to normal after they had a simple surgical procedure to repair the damage, a surgery she was able to scrub in on a few times this summer thanks to her medical training. Her research project focuses on the long-term social and economic impacts and outcomes for women who suffer from vesicovaginal fistulas. She’ll be presenting her unexpected findings at conferences this fall, with the public health research to be published sometime next year.

Arkell, who is in her third year of medicine, has made regular treks to Africa since 2005 and has travelled to Kenya every year since 2009. She took one year off from medical school last year to work on her master’s in public health, with a primary focus on global health, through the School of Public Health at the U of A. She will graduate with her master’s degree in public health in June 2012 and her medical degree in 2013.

In the summer of 2010, she spent a total of nine weeks in Kenya for her medical electives. For five weeks, she worked with a doctor in a rural, remote village in southern Kenya. The clinic had no running water or electricity. She spent the remaining four weeks working with an obstetrician-gynecologist in rural western Kenya.

When she returned to Kenya this summer, she went back to the clinic in the remote Kenyan village with medical supplies and toothbrushes for children. The people living in that remote village often don’t brush their teeth, notes Arkell. She also met with the ob-gyn she had worked with previously and donated some operating-room supplies. She is heading back to Kenya on Oct. 15 to work with the ob-gyn again for three weeks for another medical elective.

Arkell is looking forward to returning to Africa, and to further improving women’s health in the regions she has visited. She would like to continue to make regular trips to Africa to help women with this problematic but treatable medical condition.

“I really want to bring more awareness to this issue; it’s something I’m very passionate about,” she says.

“These women don’t have access to emergency obstetrical care and don’t get information on what to do when they have vesicovaginal fistulas, which is very simple to repair.”