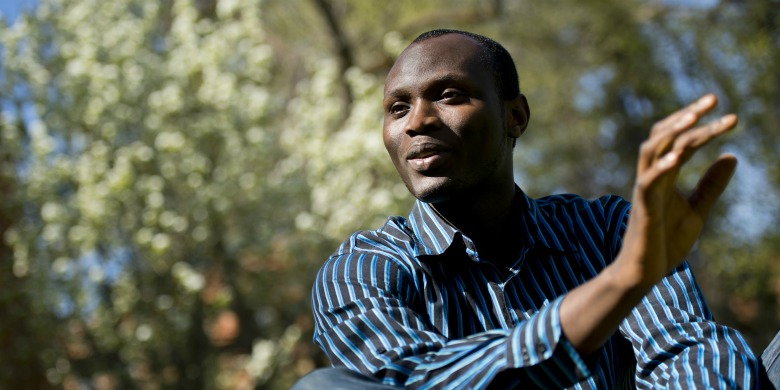 120514-nathanandrews-banner
Nathan Andrews, PhD student at UAlberta, has been named one of 15 Trudeau scholars for 2012. (Photo: John Ulan)

(Edmonton) Talk to University of Alberta PhD student Nathan Andrews about his academic experiences, and you will discover a recurring theme of community.

The journey has led him from his home in Aburi, Ghana to study at the national university in Accra. Four years ago, he made a move to start himself on the road to become the global citizen he wants to be by coming to Canada.

“To be a global citizen, you have to really step out of your zone and do something,” said Andrews. “I wanted to be that global citizen who is able to appreciate different cultures and see people from different perspectives.”

Two years ago, that approach led him to the U of A, and now to another prestigious community that has left him feeling “surreal” and “unable to explain.”

Andrews was named one of 15 Trudeau scholars for 2012 today in Ottawa. He also becomes the University of Alberta’s eighth such scholar named since the awards were created in 2002. With this prestigious award worth $180,000 over three years, he joins an engaged community of social sciences and humanities scholars devoted to issues of importance to Canadians, based on the Trudeau Foundation’s themes: human rights and dignity, responsible citizenship, Canada in the world and people in their natural environment.

“I’m grateful that the Trudeau Foundation’s board saw something in me that would be useful to the community,” he said, “and that I can benefit from that community.”

U of A experience was key

Andrews notes that the university’s research focus and its reputation as a leader when it comes to graduate scholarships were major factors in his choice to come to the University of Alberta. He credits his U of A experience for being named part of this new community of scholars. He says that members of the department of political science are pushed to strive for academic excellence and are made aware of funding opportunities such as the Trudeau award.

“I’m really glad to be part of this university, and I’ve tried to engage in this community,” he said.

Global citizen looking out for communities around the world

Andrews, who is studying international relations and comparative development, says his area of study, mining and sustainable development, certainly has both national and international concerns. He says that mining companies need to live up to their responsibilities and their rhetoric about helping communities affected by mining achieve a good, sustainable life.

“These companies come in with all these promises and their websites say ‘we adhere to these rules and regulations,’ but when you get down to the communities, they aren’t really feeling the impact of all the good things that are on the website,” he said. “We have to make sure corporations are going to safeguard the people.”

The opportunity for networking within that community and finding so many like-minded people in the group is a key reason Andrews is elated at being named a scholar. He says that the strong network of researchers, both seasoned and novice, adds to the rich experience of meeting people from different fields of study who will have potential impact on his research and help guide him down his academic path.

“I like the network that Trudeau offers. Every scholar is associated with a mentor and that mentor is to connect the scholar with other people that he or she might be interested in meeting,” he said. “To find that there are so many people who are interested in social change, that is just amazing.”