Educational event aims to unfurl mysteries of the Sikh faith. 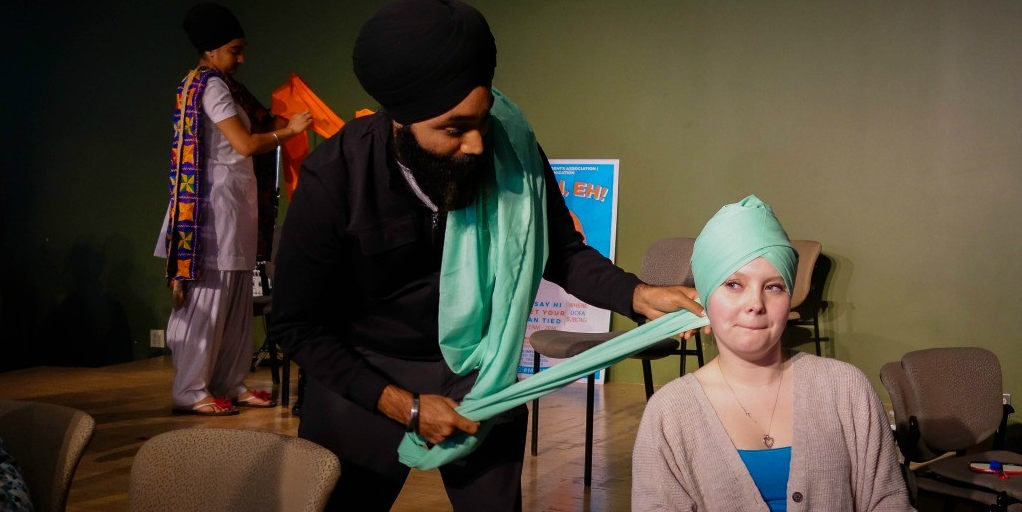 University of Alberta student Annika Roren—Scottish and Norwegian in ancestry—was eager to have her long blonde hair bundled into a green turban Tuesday, and learn about the Sikh culture.

Dismayed like the rest of the community about racist posters discovered on campus last week sporting the image of a man in a turban, Roren made a point of attending the “tie-in” event on campus today.

She was one of dozens of people lined up in the Students’ Union Building who sat barbershop-style to have their heads tied with colourful cotton cloth by about 60 volunteers from Edmonton’s Sikh community.

“It’s so cool to visually do something about racism,” said Roren, who planned to wear her turban proudly for the rest of the day. As she sat while the head covering was tied, Roren peppered a volunteer with questions and came away with more understanding of Sikh culture.

“Now I’ll appreciate that the turban is that person’s way of expressing themselves, rather than trying to hide away.”

The turban tie-in was organized by the U of A Students’ Union, the Indian Students’ Association and the World Sikh Organization, who wanted to host an educational, hands-on event to unfurl the mystery of turbans and why they are worn.

The groups were glad to come together to host the event, said Yadvinder Bhardwaj, president of the Indian Students’ Association. “We are sending a message: it means that we are all united.”

Using cloth donated by the Sikh community, volunteers tied turbans and handed out pamphlets about the Sikh culture and offered free food—another tradition.

One of the first to sit for a turban was Jesse Lipscombe, who wanted to show solidarity for the event. The Edmonton actor was the target of racial slurs a few weeks ago and started the #MakeItAwkward campaign to fight discrimination.

“This is the kind of stuff that grows from hate,” he said of the tie-in event. “I’ve always felt that regardless of faith, colour, sex or gender, we can actually learn from each other.”

The tie-in gives people a chance to ask questions about turbans without feeling embarrassed, said Inderdeep Kaur Mander, president of the Sikh Students’ Association, a fledgling group on campus. Mander, a science student who wears a turban herself, has been asked about it in the past and welcomes the interest generated by the event.

“It tells me people want to know more about my culture and religion. And by asking questions, we can create more tolerance. Hatred stems from discomfort, so an event like this creates more comfort so people can ask questions without feeling they are going to offend anyone.”

“This whole event is filling me with pride,” added U of A President David Turpin, who attended the event and was pleased to see people from the campus community and beyond take part in it. “It really symbolizes how committed the U of A is to diversity and to people from around the world. It really is an opportunity to stand up and say what it means to be Canadian.”