Two for the Rhodes 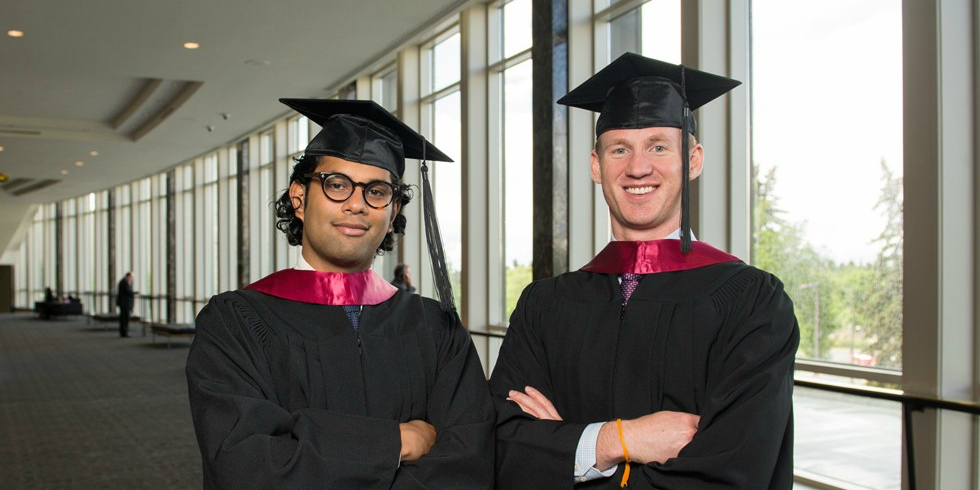 (Edmonton) A Rhodes Scholar must, by definition, be well rounded. To meet the strict selection criteria of this “world’s most prestigious” scholarship based at Oxford University, applicants must personify the ideals of academic achievement and strength of character, laid out by Cecil John Rhodes, the benefactor of the scholarship’s establishment in 1902.

For the first time in its history, the Faculty of Medicine & Dentistry at the University of Alberta will have two of its Rhodes Scholars cross the stage as they graduate together this week—the final step in their medical school career in a faculty both Peter Gill and Jeeshan Chowdhury credit with challenging them to reach and exceed their achievement goals.

“It was a long road, but I was very lucky to have been supported through it,” says Chowdhury, who will receive his MD and PhD this month. “I wouldn’t have been able to do this at any other institution,” he says.

Gill echoes his colleague’s sentiments. “After meeting medical students from other universities, I have realized how fortunate we are at the U of A,” he says. Not all institutions are so supportive of medical students who pursue a Rhodes Scholarship, he believes. “Without a doubt, I would not have accomplished what I have today without the unwavering support, encouragement, mentorship and guidance of the faculty in FoMD.”

“We were as excited for Peter and Jeeshan when they were selected as Rhodes Scholars as we are proud of them now, as graduands,” said Faculty of Medicine & Dentistry dean Douglas Miller. “These two men are shining examples of students who have challenged themselves, and those around them, to be physicians of compassion and dedication, which we strive to instil in our students.”

As a teen, Peter Gill was a talented soccer player who dreamt of going pro in Europe—until an injury changed everything. “As a 16-year-old, to be told that you have a career-ending injury is devastating,” he says. But after coming to terms with the loss, Gill realized it left him free to pursue another childhood dream: becoming a pediatrician.

After high school, he enrolled at the U of A and studied biological sciences and business before being accepted to the Faculty of Medicine & Dentistry. Having volunteered with children with disabilities—teaching him “the resilience of children and their inspirational capacity to transform disabilities into abilities”—Gill was sure pediatrics was where he belonged, and his pediatric rotations during medical school confirmed it: “Children are inspiring and always have such positive attitudes during times of illness.”

Over the last few years, Gill’s career has continued to unfold. In 2009, the MD/PhD student became the U of A’s 67th Rhodes Scholar. Since then, Gill’s research has focused on creating metrics to assess the quality of medical care children receive. “The establishment of indicators will enable clinicians, researchers, funding agencies and policy makers to identify care gaps where improvement is needed,” he says.

In February 2013, this research was published in the Archives of Disease in Childhood, earning Gill a CIHR Rising Star Award. His many accolades also include the Queen Elizabeth II Diamond Jubilee Scholarship, recognizing not only his academic prowess, but also his work promoting children’s well-being. For years, Gill has volunteered with the Stollery Children’s Hospital, Kids with Cancer Society and a rural hospital in Uganda.

Like Gill, fellow Rhodes Scholar Chowdhury is passionate about both medicine and research—and the intersection between the two. Before travelling to Oxford in 2006 as the Faculty of Medicine & Dentistry’s 23rd Rhodes Scholar, Chowdhury was part of an interdisciplinary research team at the U of A working on a hand-held “lab-on-a-chip” device for diagnosing health conditions more efficiently than a full-scale medical lab.

At the University of Oxford, the MD/PhD student moved away from research and development to the evaluation and appraisal of commercial technology. “I’ve gone from one end of the pipeline to the other,” he says. But Chowdhury isn’t content to examine health-care technology on a theoretical level. Since completing his thesis, he’s been actively working to improve technology for clinicians, co-launching an event called Hacking Health in 2012, which is meant to promote the creation of new medical applications by linking doctors with technology creators. “We want to bring clinicians into application development early, rather than late in the game, and have user-led or clinician-led development of technology,” he says. Since its inception, the event has been held all over the world, including Paris, Hong Kong, Berlin, Vancouver, Edmonton and Calgary.

Now that he has completed his Rhodes Scholarship, Gill is back in Canada, where he intends to stay. After graduating June 6, Gill will begin a pediatric residency at Toronto’s Hospital for Sick Kids; after that, he plans to return to Alberta to work as both a researcher and clinician. Chowdhury will enter a family medicine residency at the University of Calgary.

For both, their time at the Faculty of Medicine & Dentistry resonates not only as an opportunity to fulfil their academic desires, but also a challenge for them to achieve the depth of character as physicians outlined by Rhodes himself.

“We are proud that Peter and Jeeshan chose to start their medical education in our faculty,” says Miller, “and that they represent the Faculty of Medicine & Dentistry as an example of education and research excellence. We are confident that these two students are in the forefront of the Canadian health care in the 21st century.”

Two for the Rhodes