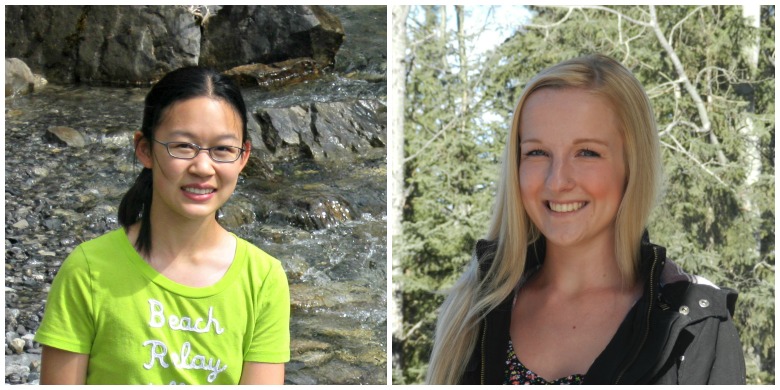 130704-schulich2013-banner
(From left) Michelle Liu and Taylor Rocque are winners of the 2013 Schulich Leader Scholarships.

(Edmonton) With futures in medicine set firmly in their sights, University of Alberta-bound Taylor Rocque of Stony Plain and Michelle Liu of Lacombe have been announced as winners of the Schulich Leader Scholarships, the richest undergraduate scholarship program in Canada.

The Schulich Leader Scholarships annual program, which awards 40 students headed to 20 Canadian universities with four-year, $60,000 scholarships, recognizes Canadian high-school students who demonstrate excellence in academics and community leadership, and who plan to commence study in the areas of science, technology, engineering or mathematics.

In her application for the award, Michelle Liu, who will start down the path of becoming a biomedical engineer in the fall, wrote she has always had a singular determination, which she has put to good use in her hometown of Lacombe.

“Becoming involved in my community is important in fostering a better understanding of the society I live in and becoming a better citizen within it.”

Since 2012, Liu has volunteered more than 100 hours at the Lacombe Hospital and Care Centre, helping to improve the quality of life of the residents and complement the delivery of patient-focused, quality health care.

When she was 12, she was chosen to perform a piano concert with the Canadian University College Orchestra in a benefit concert to replace aging pianos at the college. More recently, Liu spent last summer enrolled in the U of A’s WISEST Summer Research Program in biomedical engineering.

“I always see an opportunity to learn something,” she wrote. “Turning things into learning opportunities enables me to think critically and be innovative.”

Taylor Rocque, who had near-perfect Grade 12 marks in being accepted into the Faculty of Science, is the president of her Stony Plain high school’s Rotary Interact Club, her school’s largest extracurricular group, consisting of more than 20 members.

“Leading more than 20 students and getting the club started has been a challenging and rewarding learning experience for me,” wrote Rocque. “As a part of this group, I have been able to make a significant difference in my community.”

The club formed a link with a school in Belize to funnel south learning materials and funding to improve classrooms. The club was also instrumental in organizing a number of fundraising initiatives to benefit underprivileged families in the community.

Finding time to volunteer as a tutor and compete as a competitive softball player, Rocque was one of 22 students chosen from the Northern Alberta area to participate in the Heritage Youth Researcher Summer Program last year. As part of the program, she received a six-week paid internship at a research lab at the U of A.

“I was lucky to be chosen to work in the lab of pediatric cardiologist Lori West,” wrote Rocque, whose research focused on developing an optimized protocol for isolating and counting immune-system cells. She says the experience was instrumental in cementing her resolve to pursue a career in medicine.

“I approach everything I do with both a positive and ambitious attitude,” she said. “I wish to take advantage of every opportunity put in front of me.”