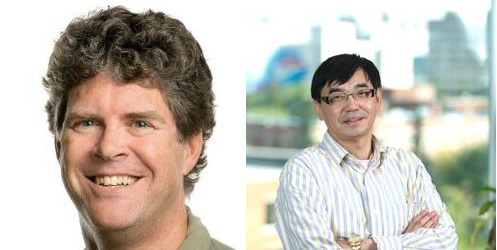 (Edmonton) The hallowed halls of Canada's oldest and most prestigious scholarly institute have called forth two more University of Alberta professors to join its ranks in recognition of their outstanding scholarly, scientific and artistic achievements.

Mathematical biologist Mark Lewis and chemical and materials engineering professor Zhenghe Xu were both elected as fellows of the Royal Society of Canada.

Lewis,who is cross-appointed to the departments of mathematical and statistical sciences and biological sciences, is a world leader in mathematical ecology, bringing mathematical methods to bear on environmental questions including biological invasions, wildlife disease, animal movement patterns and effects of climate change.

Lewis, who grew up in British Columbia, joined the U of A 2001 as Canada Research Chair in Mathematical Biology.

Since then, he says, the chair has been a magnet for opportunities to pick away at problems more aligned with Canada’s environmental problems.

Over time, Lewis has developed theories and new methods for understanding the impact of invasive species—such as zebra mussels or introduced weeds—specifically developing formulas to determine how fast they are spreading, where they will go next and how to best to control them.

“I have always put mathematics and the environment together, but since coming here I’ve really started to focus on environmental issues that have an impact on Canada—I basically get to put all those mathematical tools to good use.”

Xu, Canada Research Chair in Mineral Processing, is a recognized leader in applying scientific principles to improve mineral processing technology. He is currently addressing a major challenge facing the oilsands industry—finding the best possible way to separate the bitumen from the sand while respecting the environment as well as cost requirements.

Xu, who is also the NSERC Industrial Research Chair in Oil Sands Engineering, came to the U of A in 1997 to bolster a world-class chemical and materials engineering department led by oilsands legend Jacob Masliyah.

In October of 2009, Xu was chosen to be part of a Royal Society of Canada-convened panel and led by Steve Hrudy, U of A professor emeritus of analytical and environmental toxicology and RSC fellow, to look into the environmental and health impacts of Canada’s oilsands industry. The subsequent report challenged all stakeholders—from industry to media—to improve on the work they do with regard to Alberta’s energy sector, but dismissed claims concerning the destructive nature of oilsands development and its negative impact on health.

“At the University of Alberta, I benefited greatly by working in an environment of academic excellence and from the support that I received at all administrative levels,” said Xu. “The excellent research platforms provided by the university allowed me to successfully attract external research funds from local, national and international sources to establish a strong NSERC-IRC program.”

The Royal Society of Canada was founded in 1882 and is Canada's oldest and most prestigious scholarly institute. With this year’s inductees, the U of A now has 141 members.