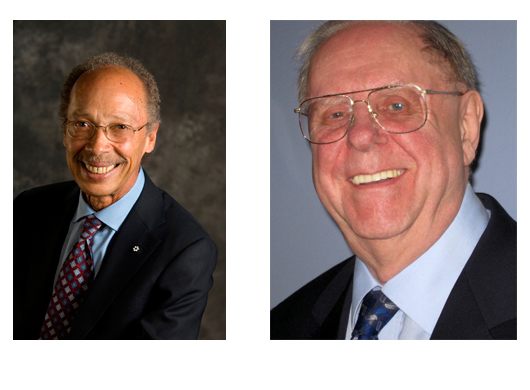 (Edmonton) Two members of the Faculty of Medicine & Dentistry are proud new members of the Order of Canada, one of the highest honours of the land, recognizing a lifetime of outstanding achievement, dedication to the community and service to the nation.

The office receives about 700 to 800 nominations every year. “The Order recognizes people in all sectors of Canadian society. Their contributions are varied, yet they have all enriched the lives of others and made a difference to this country,” says its website.

“To be recognized by your own country for the work you’ve been doing—it was quite overwhelming,” said Fields.

Bland is being honoured by the Order of Canada “for his contributions to improving the lives of people with mental illness, as a professor, administrator and researcher.”

He received his medical training in England before completing a psychiatry residency at the University of Alberta from 1967 to 1971. He joined the faculty as a full-time professor in 1975, and served as chair of the Department of Psychiatry from 1990 to 2000. At the same time, Bland held positions as a regional clinical director and in the government as director of community mental health services, then later as director of mental health and assistant deputy minister.

Along with his research on suicidal behaviour, he says another highlight was his 1988 academic work on the epidemiology of psychiatric disorders in Edmonton. Known as the “Edmonton study,” it is still considered an important Canadian study because it documented the amount and type of mental illness in a community—information that wasn’t available to service providers before that time.

Fields, an alumnus of the U of A medical school, has been appointed to the order “for his contributions to cancer treatment, diagnosis and research in Alberta as a professor and administrator.”

He joined the faculty in 1980. As an oncologist specializing in cancers of the gastrointestinal tract, he has been involved in clinical trials at the national level that have looked for the best treatments.

His main overall focus since the late 1980s has been on “cancer control”: the constellation of activities aimed at reducing the burden of cancer on populations and individuals, including everything from prevention to screening and early detection, diagnosis, treatment and care, through to end-of-life care.

From 1999 to 2005, Fields was centrally involved in planning, developing and implementing the Canadian Strategy for Cancer Control.  This led to the federal government establishing and funding the Canadian Partnership Against Cancer to continue the implementation of the strategy.

Fields says he is most proud of his work to establish the 11 community cancer centres in the province—bringing specialized cancer care to smaller communities throughout Alberta, from High River in the south to Fort McMurray in the north. He also was the instigator and initial leader of an ongoing project to make radiation treatment available at the existing cancer centres in Lethbridge, Red Deer and Grande Prairie.

In the Faculty of Medicine & Dentistry, Fields says he most proud of working with former dean Douglas Wilson to create the Department of Oncology in 1993, a move up from interdepartmental division status. Fields was division director from 1988 to 1993, then acting chair of the department until 1996.

In addition to their outside contributions, both men juggled multiple roles as all academic physicians at the U of A do—caring for their patients, teaching, conducting research and carrying out administrative duties. Bland and Fields have received numerous other awards during their distinguished careers, and although retired from their full-time positions in the faculty, each continues to work in his field in some form.