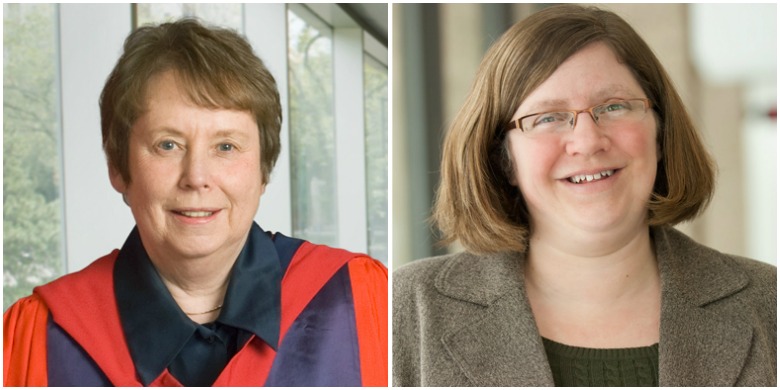 130909-sshrc-impact-finalists-banner
Patricia Clements (left) and Hadley Friedland are finalists for $50,000 Impact Awards from the Social Sciences and Humanities Research Council of Canada.

(Edmonton) Two University of Alberta researchers have been named as finalists for federal research awards designed to shine a spotlight on and support the country’s top social sciences and humanities research projects.

Patricia Clements, former dean of arts and professor emerita in the Department of English and Film Studies, and Hadley Friedland, a PhD candidate in the Faculty of Law, have each been shortlisted for $50,000 Social Sciences and Humanities Research Council (SSHRC) Impact Awards.

Clements is a finalist in the partnership category for her work on The Orlando Project, an ongoing collaborative experiment on the use of digital technology to engage in women's literary history.

Named after Virginia Woolf’s 1928 novel Orlando, a deeply literary historical fantasy spanning the reign of Elizabeth I to 1928, the Orlando Project—launched in 1994 thanks to a $1.4-million SSHRC grant—stands unparalleled in the realm of humanities computing, allowing researchers to search more than eight million words for concepts, meanings and even characteristics of tens of thousands of texts written by more than 1,350 British women authors.

“The project has made available a way in which computing can really enrich literary study,” said Clements, who co-founded The Orlando Project with U of A professor emerita and former University Cup winner Isobel Grundy, and University of Guelph researcher and U of A alumna Susan Brown. “It’s a major step forward in the integration of computing in the humanities.”

The project, which is primarily housed at the U of A but is based on a partnership between the universities of Alberta and Guelph, draws on the strengths of dozens of researchers from around the world with an expertise in women’s writing, literary history, humanities computing and computing science.

“The university has been an outstanding environment for research in the humanities,” said Clements. “And thanks to the support of SSHRC, we have trained upwards of 85 graduate students, many of whom have gone off to get jobs teaching humanities computing or working in the IT industry.”

Friedland, whose research interest is in indigenous legal traditions and legal theory, with a particular focus on Cree law, is a finalist in the Impact Awards’ talent category, which was designed to recognize a researcher who has demonstrated clear potential to be a future leader within and outside the academic sector.

Friedland, a mother of two Cree children, used her 2011 Vanier Graduate Scholarship to help with a doctoral thesis exploring how Cree legal principles can be practically applied to address today’s issues, with possible applications to governance, criminal and family law issues, and consultation on Aboriginal and treaty rights. Her work builds on her master’s thesis that, in the context of child victimization, studied stories of the Windigo, a dreaded figure who brought harm to a community.

She sees the Windigo stories as part of a legal category containing principles for dealing with violent offenders. Her PhD research is exploring other applications and a broader variety of Cree stories as well. “What other categories are there, and what do they look like?”

Initially drawn to the U of A by her supervisor and law professor Val Napoleon, a leading indigenous legal theorist in Canada, Friedland also soon discovered a network of scholarly support that has enhanced her research experience here.

In accepting her Vanier scholarship, Friedland said the support and small size of the law faculty has afforded her opportunities she might not have had elsewhere. “There is a growing graduate community at the U of A interested and committed to indigenous issues, so there are great interdisciplinary opportunities as well.”

Recipients of the SSHRC Impact Awards will be presented with their awards at the World Social Science Forum in Montreal Oct. 15.