Duo off to Oxford to pursue their passions for improving life for teen mothers and enhancing mobility for people with physical disabilities. 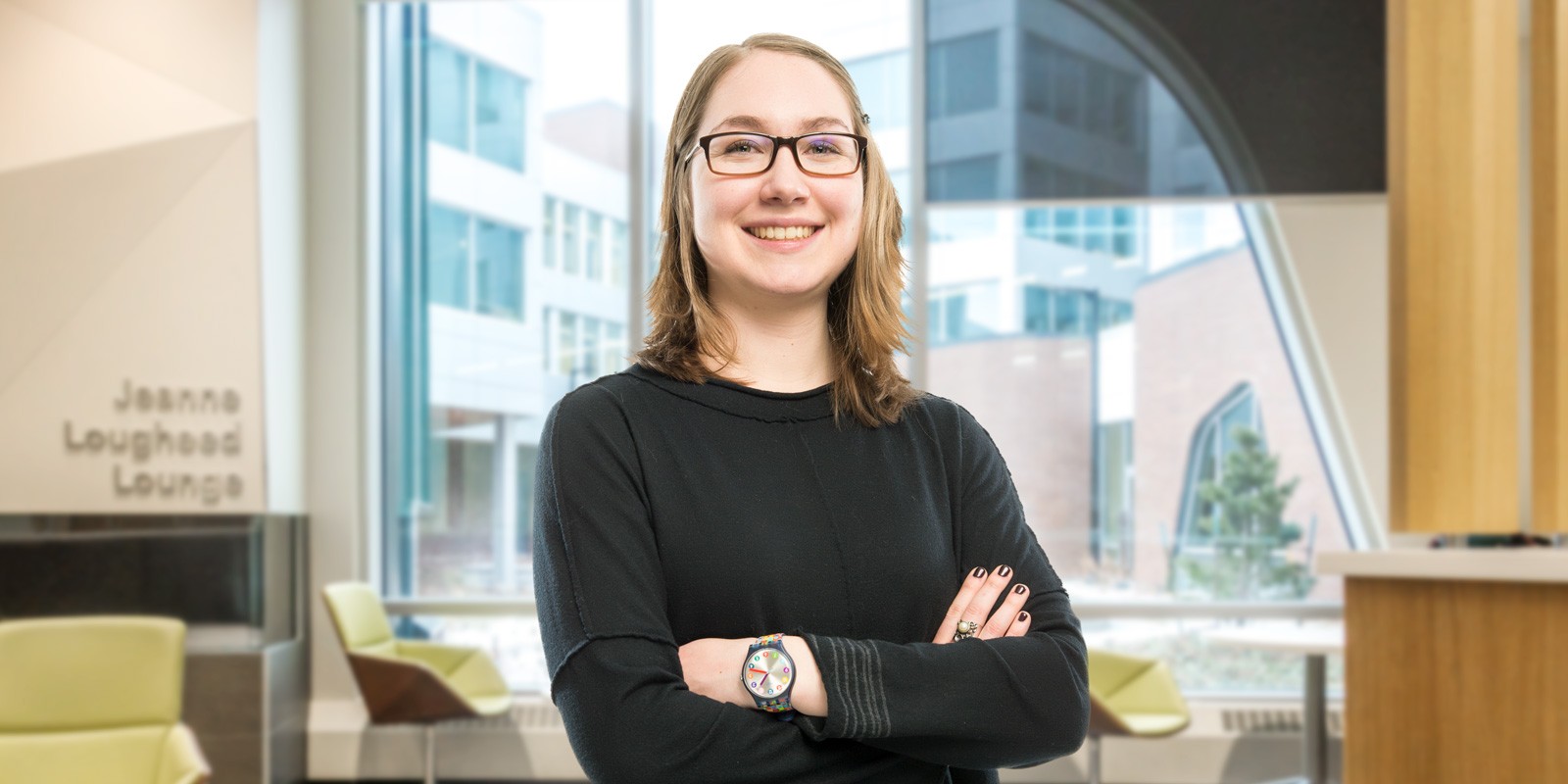 Mackenzie Martin is on track to graduate next June with degrees in education and human ecology, along with a certificate from the Peter Lougheed Leadership College. (Photo: Richard Siemens)

Mackenzie Martin wants to improve the quality of life for teenage mothers and seniors; Iain Sander wants to help people with physical disabilities acquire greater mobility. Both University of Alberta students have been chosen to continue pursuing these goals at Oxford University in the fall of 2018, as recipients of the Rhodes Scholarship.

"There was a lot of loud shouting when I got the call,” said Sander. “I had a nice bottle of champagne in my fridge that I cracked open, but I had an exam on the following Monday so I had to save most of the celebrating until the following weekend."

When Martin got her call, they asked if she was sitting down.

“I took that as bad news—I don't know why,” she said. “But when they said, 'You're a Rhodes Scholar now,' I actually lay down on my bed and cried. Then I called all my family and friends to tell them the news.”

Eleven Rhodes Scholarships were awarded across Canada, including three to the prairie region. The Rhodes is widely considered the world’s most prestigious scholarship. 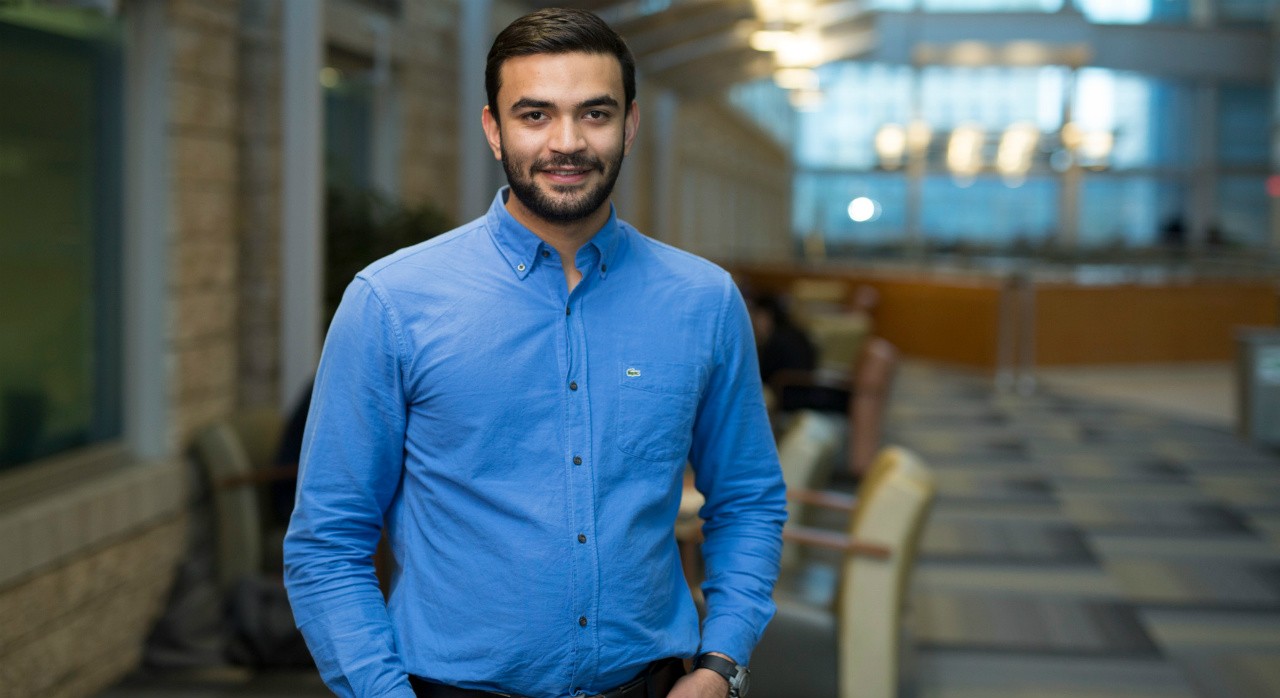 Sander’s journey began during his Lethbridge high school days when he worked for an organization called L’Arche, providing assistance to people with developmental disabilities. He completed a degree in engineering at Queen’s University, where he helped design a buoyancy device for swimmers with disabilities.

But the passion that would set the course of his life was truly ignited when he coached a swimmer who had cerebral palsy for the Special Olympics.

"At the start, we'd put a life-jacket on him and a coach would help him get from one end of the pool to the other by just pulling him along. Eventually, the life-jacket came off, and after a couple of years of support, he was able to actually start walking in the water.

“For somebody who is confined to a wheelchair, it was extremely rewarding for him. To see his excitement and joy made me realize it would be pretty incredible if I could help other people improve their mobility."

That’s when Sander knew he wanted to study medicine.

He chose the U of A "because it has one of the best, if not the best, medical school and research facilities in Western Canada, with really renowned professors,” he said. “And I think I want to work in Western Canada eventually anyway. So far, I've been loving it."

He’s also continued coaching Special Olympic swimmers at the U of A since arriving here in September.

Sander said he plans to study biomedical engineering, or more specifically, orthopedic biomechanics, at Oxford, where he’ll be immersed in the workings of the musculo-skeletal system. “I want to work on mobility-related disorders, finding ways of pinpointing where those disorders lie in the body.”

Sander said he’d also like to learn to model what effect such disorders will have on the body 10 or 15 years down the road, “then work to focus a health-care team around personalized care for that individual.

"I see the Rhodes Scholarship as a very powerful catalyst for advancing the work I want to do. Being with the swim team really provided me with a clear idea of how I could use the opportunity to make a large-scale impact. That was something I was able to communicate really effectively in my interview (with the Rhodes committee) this year."

He will return to the U of A to finish medical school after his two-year stay at Oxford, hoping to specialize in what’s called physiatry, or physical medicine and rehabilitation.

It’s a long haul, with an eventual career years away. But that doesn’t faze Sander.

A guest speaker in junior high changed Mackenzie Martin’s life forever. Her teacher had invited a teenage mother from Edmonton’s Braemar School for pregnant and parenting teens to talk about the struggles she faced in her day-to-day life.

“She talked about her experiences being pregnant, giving birth and the sexual abuse that led to her pregnancy,” said Martin. “I was 12 and this woman was 16, and I couldn't imagine having a child in four years.

“The concerns related to this vulnerable population captured my heart. Pregnant teens and teen mothers are a stigmatized group that needs a lot of support. From a developmental perspective, it's really important to make sure the mom and baby are put in the best position they can be."

Martin initially decided to study elementary education at the U of A, switching in her second year to a combined program in education and human ecology in the Faculty of Agricultural, Life & Environmental Sciences (ALES). "It's been awesome,” she said. “I've had so many opportunities as a result."

When she graduates next June, she will receive a degree in each discipline, in addition to a certificate from the Peter Lougheed Leadership College.

Now in her fifth year, she is busy completing her teaching practicum at S. Bruce Smith School, hoping to be placed next term at Braemar School. In 2015, she created the Post-secondary Possibilities Program for students of Braemar, which allows them to spend time on the campuses of the U of A, NAIT and NorQuest College learning about options for post-secondary education.

In ALES, she has worked as a part-time research assistant with AGE-WELL, a national research network that focuses on aging and technology. In 2016, she won an undergraduate researcher stipend to conduct an ethnographic study at De Hogeweyk, an internationally renowned village near Amsterdam for people with dementia. And last summer she went to Japan to do an internship at the World Health Organization.

"I'm interested in promoting people's quality of life over the life course, from teen mothers to aging populations,” she said. “I'd also like to research the roles older adults can play in promoting teen parents and their children, and the reciprocal benefits that can result from intergenerational interaction.”

Martin’s plan for Oxford is to pursue a master of science in evidence-based social intervention and policy evaluation. When she returns, she’d like to continue training as an academic, “looking at research literature to see what it suggests for helping populations like teen mothers, implementing it together with that population and then evaluating whether it's successful."