U Cup runneth over 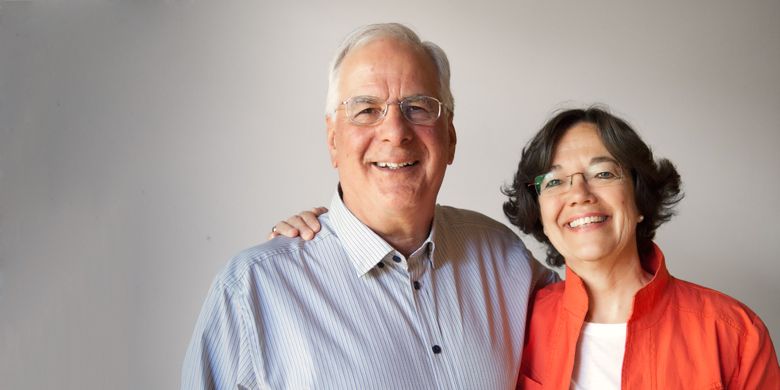 Their respective fields of study are at opposite ends of the spectrum�Ingram teaches printmaking in the Faculty of Arts while Sykes teaches biochemistry in the Faculty of Medicine & Dentistry�but their common love of teaching and research has earned them the U of A’s highest faculty honour.

Ingram, the 2011 University Cup recipient and Sykes, the winner for 2010, will be among outstanding faculty, students and staff being recognized at Celebrate!, the university’s annual celebration of teaching, learning and research, being held Sept. 16 at the Myer Horowitz Theatre.

Both feel grateful to receive the award, and to be professors at the U of A.

“I can’t imagine a better place to be,” Ingram said. “We have room to explore, try out new things and we are surrounded by people who are passionate about what they are doing. What could be a better place to work, teach and create?”

A Distinguished University Professor in the Department of Art & Design, Ingram earned her master’s degree in visual art at the U of A in 1975, after receiving an undergrad degree from York University. In the more than three decades since, she’s been sharing her creative vision with U of A students, and helping them discover their own artistic passions.

“I think of my role as being that of a catalyst and facilitator, helping students discover their individual sensibilities, particular strengths and their most fruitful creative directions,” she said. Through her teaching, she strives to shape confident, curious, empathetic and collaborative students who graduate from the U of A ready to go into all kinds of arts-related job fields.

“They have an open, flexible and empathetic spirit and a confidence in living with uncertainty�which is fundamental to growth.”

Accepting, even embracing uncertainty, was one of life’s lessons passed on through her late mother, who was the sole Holocaust survivor of her family, Ingram said.

“My mom loved life and lived in the moment. It was contagious to everyone who knew her.”

Ingram is also deeply inspired by her 100-year-old father, an appreciative scholar of music who introduced his children to the wonders of other cultures by installing his family in India, where Ingram went to school as a girl, after her birth in Argentina.

Witnessing both the majesty and the cruel contrasts between beauty and poverty of New Delhi was something Ingram never forgot. “We are part of something much bigger than ourselves as human beings.”

Ingram works to weave that philosophy into her research, which takes the form of her multi-layered studio creations. Using methods and materials ranging from lithography to digital media, she focuses her work on water and the human form, which she says are “metaphors for human existence and the element of something much bigger.

“I want to express an idea of our connection with our environment and nature.”

Over the years, Ingram has garnered several awards for her research, including her Distinguished University Professor, the Gordin J. Kaplan Award for Research Excellence and a Fellowship in the Royal Society of Canada. Her work has been exhibited all over North America, South America, Europe, the Middle East and Asia and has been acquired by several universities, museums and collectors in Canada. Her latest installation can be seen at Calgary’s Southern Alberta Jubilee Auditorium.

Sykes, a Distinguished University Professor in the Department of Biochemistry, has built a synergy with students that has powered his teaching and research throughout his many years at the U of A.

“To be given an intellectual challenge every day is marvelous,” he said.

Raised in Alberta, Sykes graduated with an honours degree in chemistry from the U of A in 1965 before heading to the halls of Stanford University, where he earned his PhD, then became an assistant and associate professor of chemistry at Harvard University from 1969–1975, before returning to the U of A.

He started out as an associate professor of biochemistry, and over the years, added to an ever-growing list of accomplishments, including serving as department chair, Canada Research Chair in Structural Biology, as a visiting researcher at the University of California, and, most recently, as a visiting professor at King’s College in London.

His accolades include a Distinguished University Professorship, the Gordin J. Kaplan Award for Research Excellence, a McCalla Research Professorship, and a Fellowship in the Royal Society (London).

Along the way, Sykes took time to build rapport with his students, a treasured concept that lies at the heart of his teaching philosophy. He often works evenings and weekends in order to make himself available to this students, and actively works with graduate students in his nearby lab.
Collaboration binds them as a team and together, they explore new ideas, Sykes said.

“We are intertwined with the research. We learn together. The greatest thing I can do is write a paper that also has a student’s name on it.”

Early in his career, Sykes realized that he could learn from his students, as well as teach them.

“The students are all different and will take things in their own direction, based on their own talents. They add to the equation and this moves our team off in new directions and we follow our noses. Our research really is a collective effort.”

And when his students eventually graduate and move on, “I look for them to outstrip me in research creativity,” Sykes said.

That is no easy task, given his own sterling record of scientific exploration into the mysteries of protein structure. The author of 480 published papers, Sykes studies the structural biology of proteins in human muscle. By focusing on what happens to proteins during a heart attack, for instance, Sykes hopes he and his researchers can help influence smarter drug design.

While conducting his life’s work, he tries to set an example of excellence for his students, something he was inspired by as a young faculty member at Harvard University. “I learned the meaning of what it is to be world class. People tend to toss the word around, but sitting in a faculty meeting with Nobel Prize winners, I learned what a world-class standard really was.”

Deeply gratified by his career at the U of A, Sykes considers himself lucky to be a professor here.

“I’m more than fortunate to be able to have a job I like to do, that stimulates intellectually for the whole of my life. After 36 years, I still like coming to work in the morning.”

U Cup runneth over
Newsroom