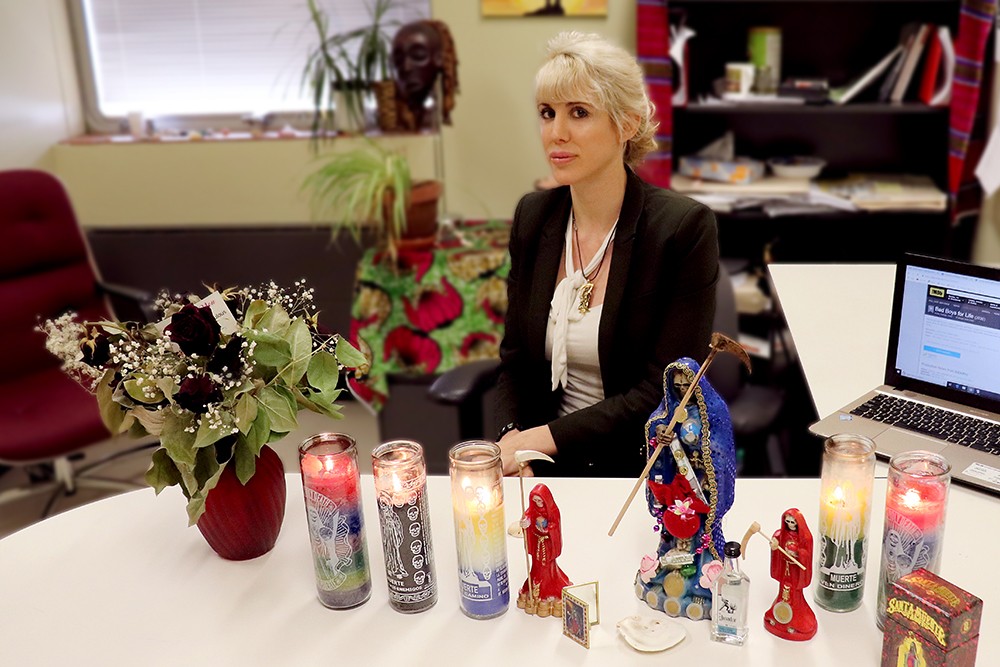 Anthropologist Kate Kingsbury displays some of her collection of Santa Muerte icons, along with offerings including votive candles, flowers and tequila. (Photo: Michael Brown)

As the third instalment of the hit Bad Boys movie franchise featuring Will Smith opens, there’s a good chance producers will get the details right when the plot turns to the veneration of Santa Muerte, the female Mexican deity of death.

That’s because the film’s production company, Overbrook Entertainment, consulted with University of Alberta anthropologist Kate Kingsbury, an expert on a badass female folk figure that has exploded in popularity across Mexico over the past decade.

In the film, Bad Boys for Life, a female villain played by Mexican film star Kate del Castillo escapes from prison to seek revenge on Will Smith’s detective character and his partner, played by Martin Lawrence, for perceived harm done to her son.

The Castillo character is a devotee of Santa Muerte, complete with a shrine in her home. She burns candles and recites an incantation urging the saint to assist in her vengeful plans.

Kingsbury told the film’s producers the set design for the shrine must include colours associated with revenge (black), magic (purple) and protection (white), which are essential to the saint’s iconography. She also submitted a revenge prayer used by devotees with just the right shades of rage and bellicosity.

“My interest in Santa Muerte is that her devotees are primarily female,” said Kingsbury, who does research on female deities around the world.

“The old deities or saints are just no longer relevant for women in our time. If you look at Mary, for example, she's a very meek and mild figure and role model. Mexican women now face so much hardship, violence and poverty, that I think this figure is a lot more empowering."

Kingsbury first discovered Santa Muerte when she taught a course two years ago on conceptions of death around the world. She found the only scholarly book on the death goddess, Devoted to Death by Andrew Chesnut of Virginia Commonwealth University, and invited him to talk to her students.

That meeting led to a fruitful research collaboration, resulting in several publications and a planned book. While on vacation in Mexico, Kingsbury tracked down a shrine to the goddess on the outskirts of a small town called Pochutla in the southern region of Oaxaca. She was so fascinated, she came back a year later just to do research.

"Everywhere I went, I kept asking about Santa Muerte. Some people are really afraid of her, because the Pope has decried her worship as heretical. Everybody knows who she is, and some will say, ‘Be careful, she's satanic and you don't want to get involved in that.’

“Virgil said men make God in their own image,” said Kingsbury. “The argument I want to make in my book is that women make goddesses in theirs … reflecting their realities on the ground. Whatever the devotee is, they will make her into a reflection of that."

A death goddess is born

According to Kingsbury, Nuestra Señora de la Santa Muerte, or Our Lady of Holy Death—also known as Skeleton Saint or Saint Death—first emerged after the Spanish conquest of the Aztec Empire in the 16th century. The Spanish imposed Catholicism on Mexico’s Indigenous population, prohibiting veneration of their own religious figures on pain of death.

Along with Catholic icons such as Jesus and Mary, the conquistadors also imported the grim reaper, or “La Parca,” who is female in Spanish mythology. It’s why Santa Muerte carries a scythe and wears a long cloak.

"The Mexican people saw the grim reapress and identified her with their own death deities, imagining her as a death goddess,” said Kingsbury. “But because (it was) punishable by death, all of this went underground."

Santa Muerte doesn’t emerge in the anthropological record until the 1940s, when women in Oaxaca are found worshipping her, mainly for favours of love, said Kingsbury.

“But they were vengeful favours, especially to bring back an errant lover or straying husband, to punish him and bring him back humbled on his knees,” she explained.

"Her iconography is incredible, because it's a mix of so many different things—Catholicism, Aztec pre-Hispanic belief, even Cuban or Afro-Cuban religious elements.”

Yet while Santa Muerte certainly represents death on one level, her appearance often portending one’s demise, she’s also seen as a healer, affirming life or “the coincidence of opposites,” said Kingsbury.

"Venerating her allows you to accept death should it come to you, but there are also lots of miraculous stories about her saving people from death."

“Some people pour a glass of tequila for her, or light a cigarette or spliff and blow smoke in her face,” said Kingsbury, adding that Santa Muerte doesn’t mind if you partake yourself.

"And if you hate someone, you inscribe their initials on a black candle and light it," she added.

Most importantly, Santa Muerte is non-judgmental, even amoral, whereas Catholicism can be seen as judgmental and exclusionary, said Kingsbury. That indifference to social identity is what makes her so popular in gay communities, she added.

"Whether you're rich or poor, gay or straight, black or white, everyone's going to die.”

Her amoral nature has also attracted criticism, however, since she is believed to answer the prayers of drug dealers.

"You see a lot in the press about her being venerated by drug dealers who ask her to get their methamphetamine shipments across the border.”

At the same time, her popularity among women demonstrates she is far more in line with 21st-century female autonomy and agency, embodying strength, tenacity and a good dollop of female rage: “She’s known sometimes as a cabrona or puta—a real bitch,” said Kingsbury.

And though she may have inherited some of the Virgin Mary’s more nurturing qualities, “If you do not respect her, she will come down on you" with the full force of her wrath, Kingsbury noted.

Beyond simply inspiring Mexican women with her “grit, vim and vigour,” Santa Muerte’s popularity has allowed them to profit from her image, setting up shrines and shops, soliciting donations and selling all manner of candles and effigies.

“Her social status has accrued, and because of these shrines, people are visiting from far and wide."