U of A curlers win nationals 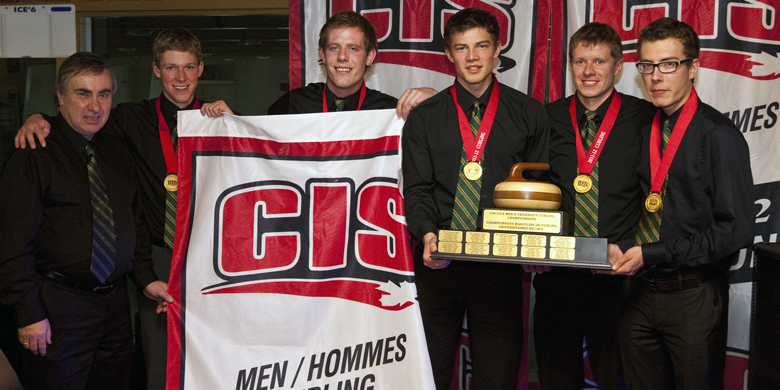 It is the first CIS/CCA title in Golden Bears history. The Alberta rink, comprised of skip Brendan Bottcher, third Mick Lizmore, second Brad Thiessen, lead Karrick Martin, alternate Parker Konschuh and team coach Bernie Panich, only needed seven ends to defeat Waterloo. The Bears scored three in the second and sixth ends, and stole one in the fourth to end the match before the eighth end.

The Golden Bears went 6-1 in draw play, losing only to the University of Prince Edward Island Panthers in their second match of the event.
Alberta went 12-1 against CIS competition this season, including a 5-0 record at the Western regional qualifying tournament in Winnipeg in late February.

The win also represents Bottcher's third major curling championship win this season. The rookie skip and chemical engineering student captured the Canadian junior title on Feb. 12 in Napanee, Ont., then five days later he led the Bears to a CIS/CCA berth thanks to a 5-0 record at the qualifying tournament in Winnipeg. Two weeks later, he skipped Team Canada to a world junior championship in Sweden.

The Golden Bears will now represent Canada in Trentino, Italy during the 2013 Winter Universiade.

U of A curlers win nationals
Newsroom