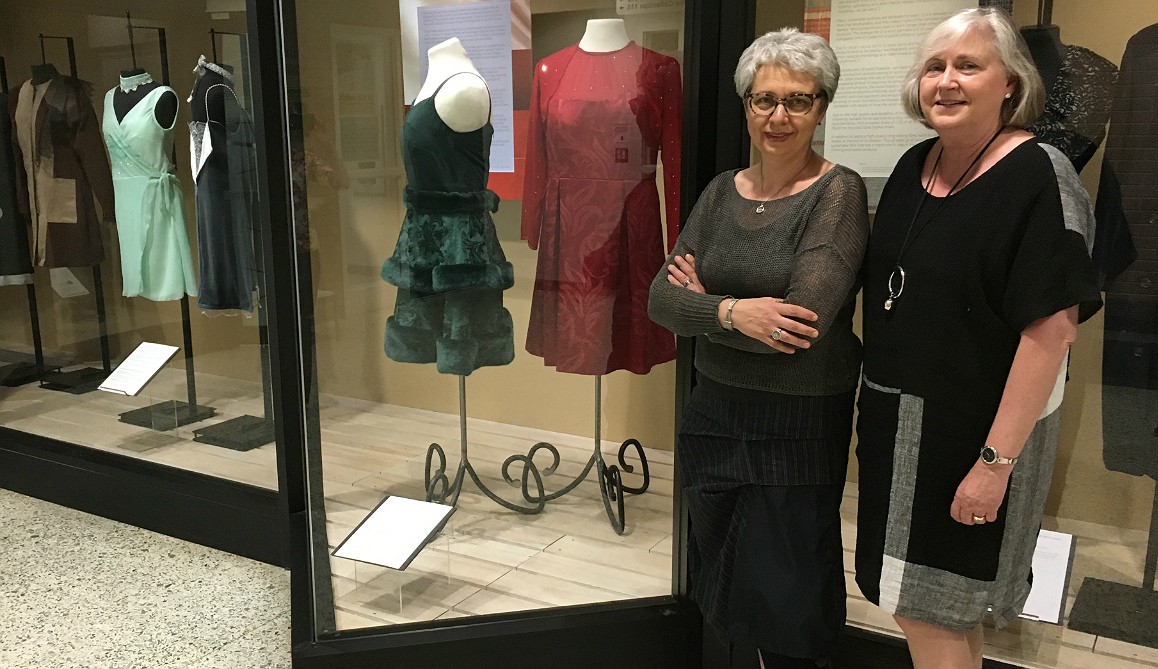 Lorree Verbeke is looking forward to keeping warm next winter in a new version of her grandpa’s old coat, wrapped in good memories.

The University of Alberta student reworked the fine, 40-year-old garment as part of re-Vision and re-Turn, a new exhibit in the Faculty of Agricultural, Life and Environmental Sciences that explores sustainable fashion.

“It’s nice to know I was able to rework that piece and carry it forward in my life, and to have a piece of him with me,” she said.

She also feels good knowing that instead of hanging unused and forgotten in a closet, the coat will be worn for years to come. “I love that I’m now able to wear it.”

As a final class project, Verbeke and her fellow apparel design students in the Department of Human Ecology were challenged to think about using their talent and imagination to turn used clothing into something new.

It’s becoming more important to thread the idea of environmental sustainability into how we treat our clothing, said class instructor Vlada Blinova. “The fashion industry is beginning to have a negative image,” thanks to “fast fashion” that meets consumer demand for new storefront offerings each week by churning out quickly made, poor-quality clothing.

Not so long ago, off-the-rack clothing was a cut above what it’s become, Blinova noted.

“The quality of fabrics is not the same as it used to be 10 or 20 years ago. A lot of blends aren’t as durable or comfortable to wear. They lose their look after the first wash,” she explained.

The result tends to be closets glutted with cheap garments that take an environmental toll in their making, and again by clogging landfills after they’re thrown away because they don’t fit well or wear out.

Blinova wanted students to challenge that trend. They took the project to heart, cutting up old jackets, skirts, gowns—even old Christmas tablecloths and curtains from the family cabin—and using the fabric as raw material to create an assortment of funky, chic new dresses, coats, even a backpack and a tiny pillbox purse.

And though the assignment for their fourth-year class only required them to use 40 per cent of upcycled materials in their final products, their 13 weeks at the cutting table and sewing machine took them well past that.

“Most of them went 100 per cent,” said Blinova. “They were excited about the idea and they want to be leaders and make changes in the fashion industry.”

“This was a good project in teaching students about quality fabrics, about what they look and feel like,” added Kathryn Chandler, who helped research the exhibit. It’s also a nod to a time when reworking clothing was a way of life, she noted. “People used to do it out of thrift; it’s now the moral thing to do, to help with environmental sustainability.”

Verbeke, inspired by a coat worn by the newly minted Duchess of Sussex, Meghan Markle, patterned a new one from her grandfather’s size 42, navy blue, wool and cashmere version. And though she felt bad about cutting up the original garment, the result was well worth it, she said.

“I learned there’s a lot of possibilities with clothing you already have, and it just takes time and practice to make it work. It made it worthwhile, that I put a lot of effort into it.”

The reimagined mix of clothing showcased in re-Vision and re-Turn is wildly creative. The two dowdy damask tablecloths became flirty cocktail dresses trimmed in faux fur and Swarovski crystals. A jewel-green satin Chinese-style dress sprang from a sister’s old dress bodice and her mother’s pillowcase. That cabin curtain, paired with pieces of a man’s old suede jacket, turned into a new fall coat with lace details. A sleek colour-blocked dress, fashioned from two blazers and a pair of trousers, gives the illusion of a big-city skyline.

The total transformation is an eye-opener, Blinova said.

“We hope it’s going to inspire people to be more informed consumers.”

Besides looking for more quality rather than sheer quantity in their wardrobes, people may want to have a second look at a beloved outfit that’s been pushed to the back of the closet as one of those old standbys they can’t quite part with, and give it a second chance with the help of a tailor.

“It’s a great way to revisit the love of a garment you had when you first bought it, and gives it a longer life,” said Chandler.

For her part, Verbeke plans to continue turning the old into the new and to be more mindful of what she buys.

“You’re more conscious of your purchases, because it’s about loving the garment you choose to buy and having an emotional connection to it,” she said.

Her design won an award, and she used the cash prize to buy a new sewing machine. She’s already working on a summer short and top set being reworked from thrift-store clothing.

“I hope people can look at our work and appreciate the clothing they have. That old suit they have, it can have another life. And it doesn’t have to be just about clothing, it could be reworking other things in your life, like home decor. Have an appreciation for what you have around you and give it a second chance at life, because mass-producing new stuff affects our environment so much.”

re-Vision and re-Turn is on display until Sept. 30 in the main foyer gallery of the Human Ecology Building on North Campus. Exhibit hours are 7 a.m. to 9 p.m. Monday to Friday, 8 a.m. to 4 p.m. Saturday and noon to 4 p.m. Sunday.