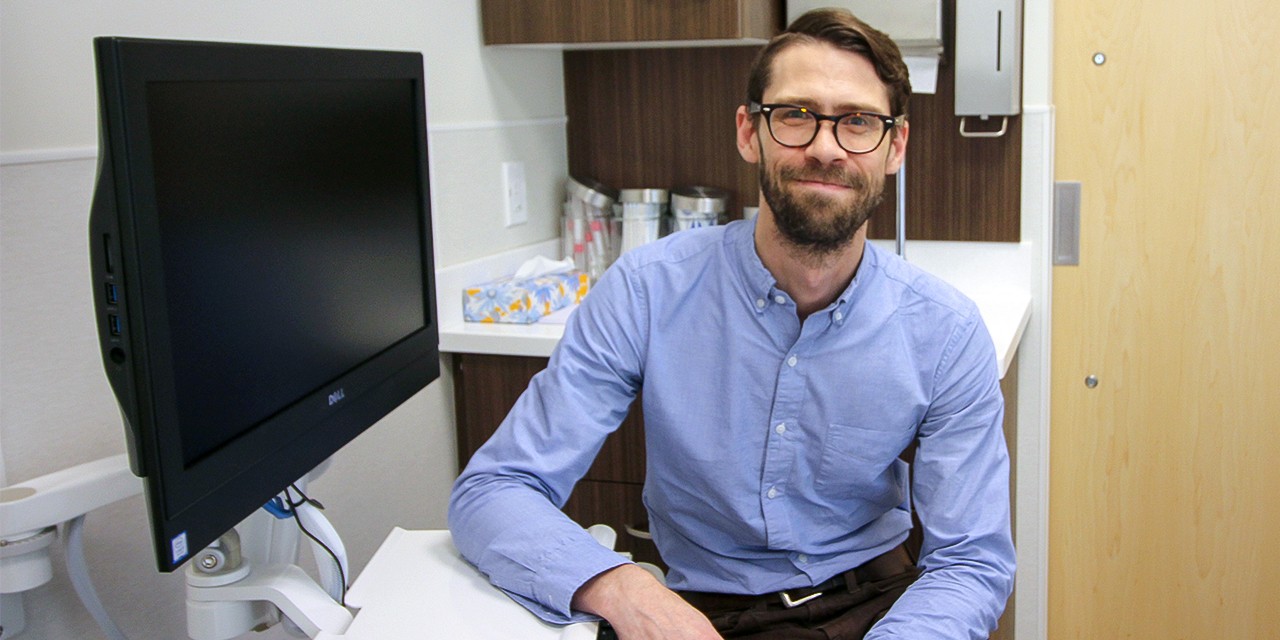 Peter Bell, medical director of the newly opened MacEwan University Health Centre and a clinical lecturer with the U of A’s family medicine department, says the clinic will lead the way in teaching a new model of care to U of A medical residents. (Photo: Ross Neitz)

A newly opened health centre at MacEwan University that operates under a different model that has been shown to offer a better way of providing care to patients will serve as a new training site for University of Alberta family medicine residents and other health learners.

“This is not the physician-centric model,” explained Lee Green, chair of the U of A’s Department of Family Medicine. “It is we, the doctors, nurses, medical office assistants, psychologists, social care workers, pharmacists and others—we take care of these patients together, all under the same roof. So it's a different mindset.”

The MacEwan University Health Centre, which held its grand opening today, is at the forefront of an effort to strengthen primary care in Alberta by embracing the medical home model—an approach to care that is patient-centred, systematic and team-based. In addition to serving more than 5,000 patients and MacEwan University students, the health centre will serve as a training site for U of A trained physicians and other allied health learners.

The health centre, which opened last July, is a test case for the medical home model of care in Alberta. Funded by Alberta Health, it is operated by a non-profit corporation called the Northern Alberta Primary Care Academic Clinics, allowing staff more flexibility in how they work with patients. Similar medical home models of care have been tested in other jurisdictions outside of Alberta with great success—which is now hoped to be replicated here.

“When you look at the data, it shows that patients who are cared for in this way—especially patients with complex chronic diseases—have fewer emergency visits, fewer hospital admissions and higher patient satisfaction,” said Green. “They do better. Patients just do better.”

“The clinic focus is on improving access and ensuring that the right care is provided at the right time by the right person,” added Peter Bell, medical director of the MacEwan University Health Centre and a clinical lecturer with the U of A’s Department of Family Medicine.

Though the centre has no official affiliation with the U of A, the 15 physicians employed there maintain appointments with the Department of Family Medicine and will act as preceptors and faculty advisers for family medicine residents. Every year, a contingent of roughly 10 to 12 first-year U of A family medicine residents will do a six-month rotation at the clinic and will return to it on a regular basis throughout the remainder of their two-year program. Residents from other postgraduate programs will also learn at the centre, as well as undergraduate learners from the fields of nursing, social work and other allied health programs.

The health centre is also different from conventional health clinics in its focus on being systematic in how patients are treated. Under the new model, staff can track all their patients with chronic disease and proactively schedule appointments and implement practical guidelines to better help manage their illness.

“It's not the usual reactive routine where patients come in, are told to come back in three months and if they don't come in, it’s ‘Oh well, whatever.’ The medical home model of primary care is very proactive,” said Green. “We know who all of those patients are and we are not waiting for them to come in feeling badly.”

According to Green, the new model should also prove to be a positive for the bottom line of Alberta’s health-care system. Studies from other jurisdictions that have adopted a similar medical home model of primary care have shown a return on investment of $3 for every $1 spent within 18 months of implementation.

“It means investing more in primary care, but boy does it pay off. It not only saves money for the payer, but it also makes patients better. It's a win-win,” said Green.

Over the next several years, the U of A Department of Family Medicine hopes to move its other existing residency training sites in Edmonton to locations that support the medical home model of primary care as well.

For the staff already working at the new clinic, it’s an opportunity to lead the way in teaching the new model of care to U of A learners.

“It's been an abrupt learning curve for sure, and we’re just starting to feel like we’re getting our feet underneath us right now,” said Bell. “But it is very exciting. For many of us it’s a once-in-a-lifetime opportunity to be able to partake in an initiative like this. So as daunting at times as the task may seem, I think we really have the enthusiasm, the expertise and the team to deliver on what we've promised.”