Augmented reality game lets users see and touch virtual spiders that get more realistic as they level up. 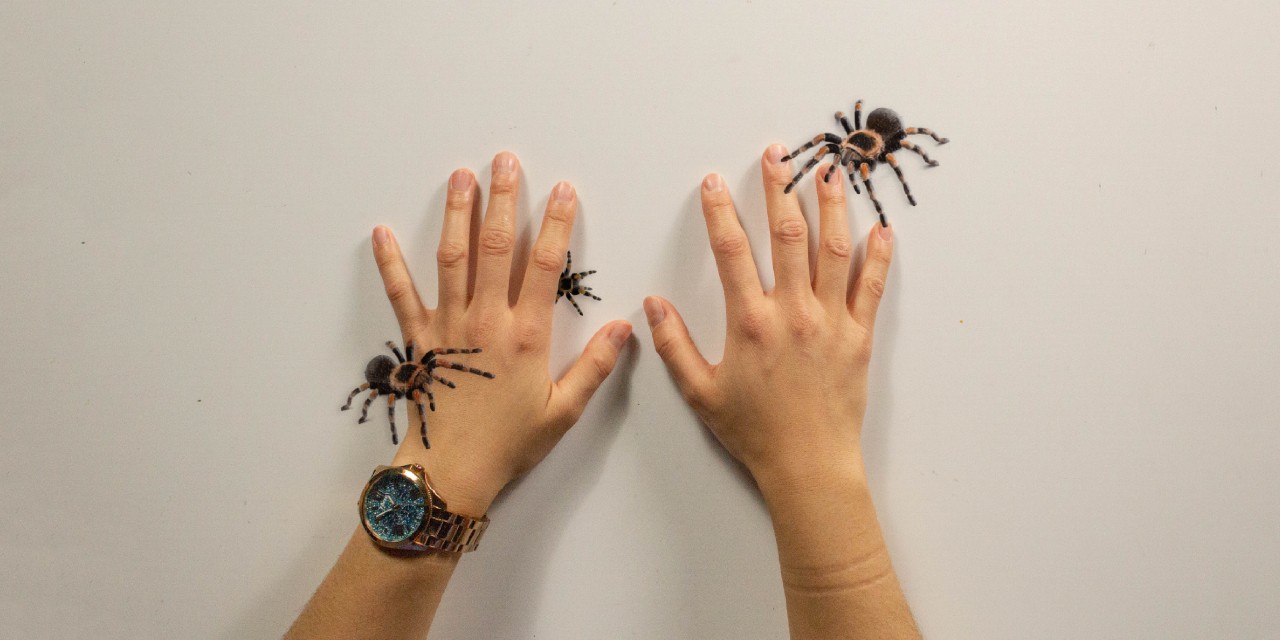 U of A graduate student Anna Chakravorty designed an augmented reality game in which users interact with virtual spiders that appear more realistic as the game goes on. (Photo: Supplied)

A University of Alberta fine arts student has designed an augmented reality gaming platform to help arachnophobes overcome their fear of spiders.

“The idea is, if I'm sitting here with an AR headset on, I can see a spider right in front of me,” said Anna Chakravorty, who submitted the project for her master’s thesis in visual communication design.

“It can appear to be crawling, and I can touch it—I can interact with it.”

When arachnophobia patients complete the AR game under the supervision of a psychologist, Chakravorty said, the hope is they will be better equipped to face real spiders in exposure therapy—widely considered the most effective treatment for specific phobias.

She said the game will allow players to interact with animated spiders that start out looking benign and cartoonish, but appear more realistic through each of five levels.

So far Chakravorty has mapped out how the game will work and what the visual features will look like. She presented her design at the U of A’s Fine Arts Building Gallery in February before finishing her degree this winter.

She hopes to begin developing a prototype soon, perhaps as a doctoral project, once she secures interest from a software developer.

Chakravorty’s concept is based on augmented reality technology, which superimposes information—images, text or sound—on the world we see through a headset or glasses, smartphone or some other device. The international game craze Pokémon Go, for example, uses AR technology.

She has also consulted with computing scientist Pierre Boulanger to perhaps one day add ‘taptic’ elements simulating the tactile sensation of a spider against the player’s skin, as it sits in the palm of one’s hand or crawls up one’s arm.

Chakravorty said the potential for “serious games”—aimed at a purpose beyond entertainment—is huge in the health field. Yet clinicians and patients have been slow to adopt them, mainly because of a “disconnect” between app developers and mental health professionals.

For her own design—the first ever to apply AR serious games to arachnophobia—she consulted numerous psychologists to determine which features are most useful in a clinical setting and how the patient experience can be improved. She hopes to test the game with arachnophobia patients once she receives the necessary ethics clearance.

Psychotherapists have used apps based on virtual reality technology, which projects users into a separate, simulated environment through a headset. But Chakravorty believes her approach—called augmented reality exposure therapy—is more realistic, since it incorporates the user’s immediate surroundings into a given scenario.

Empathy is also central to the game’s concept.

“With the VR treatments right now, the patient is trained to kill the spiders,” she said. “With mine, the only way to advance is to interact with the spiders and create a bond with them—that is how you complete the game.

“It's more about how to manage your anxiety without killing the spider.”

Chakravorty has no more than a mild distaste for spiders herself, but she does understand specific phobias. As a young girl in India, she inserted her arm into a hollow balcony railing without realizing it contained a beehive. She was badly stung, and has been terrified of bees ever since.

Her game’s narrative is partly based on the Greek myth of Arachne, who challenged Athena, goddess of wisdom and crafts, to a weaving contest. Arachne wins the contest but is beaten up by the jealous Athena and hangs herself out of shame, after which she is transformed into a spider.

In Chakravorty’s story, the player helps Arachna (the spider), by seeking revenge against Phobos, god of fear, and wins by befriending a spider that appears increasingly real, eventually capturing it and setting it free.

“The game can also help you adapt to different scenarios you might be afraid of, such as camping or cleaning basements, and learn to control your anxiety there,” she said.

Therapists working with arachnophobia patients can customize certain features of the game, adding storylines or making adjustments on the behaviours of spiders based on information from biofeedback sensors recording heart rate, blood pressure and body temperature.

The game records the user’s voice, so a patient can describe what they’re feeling at any given moment. It also senses whether the patient is actually looking at the spider or trying to avoid it.

“If you're able to hold a (virtual) spider without feeling anxious, and your biosensors are fine, you advance. Once you're able to capture and release it, that's the end of the game.

“Most patients with severe arachnophobia don’t opt for exposure therapy, because they're too anxious about it,” Chakravorty said.

“But this is easy to use. All you do is put on the headset and go—there's no training required.”