U of A has $12.3-billion impact on Alberta economy 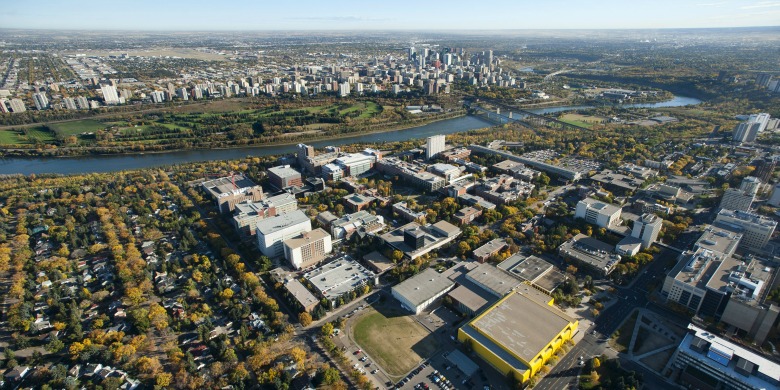 121002-economicimpact-banner
UAlberta is a vital part of Alberta's economic landscape, with an estimated impact of $12.3 billion or five per cent of the province's gross domestic product.

(Edmonton) The University of Alberta’s impact on the Alberta economy is estimated to be $12.3 billion, which is five per cent of the province’s gross domestic product—or the equivalent of having 135 Edmonton Oilers NHL teams in Alberta, according to a new study.

“When a university educates a population, it’s the whole region that benefits,” said study co-author Anthony Briggs, an assistant professor in the Alberta School of Business at the U of A. “We’re not looking at the cost of the education and research, which is just one slice, but estimating the value of the investment. Education and research impacts are substantial and spread across sectors—all areas of the economy share the benefit.”

Modelled on similar studies first conducted by the University of British Columbia in 2009, the U of A report focused on the direct impact of institutional and visitor spending combined with induced economic impact from university education and research.

The study showed that U of A alumni earn more because of their university education. It also showed that the U of A is a stronger economic driver than UBC, Simon Fraser University and the University of Ottawa, the comparator universities used in the study.

“This research gives us a better understanding of the University of Alberta’s importance to the Alberta economy, and indeed to the prosperity of Albertans, Canadians and the world,” said U of A President Indira Samarasekera. “We enjoy that prosperity thanks to the inspiring work of our faculty, hard-working staff and talented alumni who prepare and create new opportunities for today’s students and tomorrow’s leaders.”

The U of A’s economic impact exceeded UBC’s own findings of $10.4 billion, as well as those of the University of Ottawa ($3.9 billion) and Simon Fraser University ($3.7 billion), which had previously done similar studies. A key driver of that success is from the “education premium”—higher-value economic activities that are driven by alumni educated at the U of A.

University of Alberta alumni resulted in a $4.1-billion education premium—1.5 times greater than UBC’s ($2.7 billion), and outpacing Simon Fraser’s ($1.7 billion) and the University of Ottawa’s ($1.6 billion).

“The results are very robust,” Briggs said, “and we know the difference is because we have a large alumni base in Alberta, where education really matters for earnings.”

The study also showed that research at the U of A has a larger impact on the provincial economy than the comparators, fuelled by research and development and the overall strength of the Alberta economy. U of A research over the last 30 years was estimated to have an indirect annual impact of $5.7 billion, slightly higher than that of UBC ($5 billion) and substantially higher than that of Simon Fraser ($852 million).

“When you look at research and development growth, the University of Alberta is a large player and has a higher institutional share,” Briggs said.

The U of A study follows methodology developed at UBC, but represents the first time comparator universities have been shown side by side, he added.

“Universities have multiple avenues that contribute to societies, and this economic study is the first to measure impact relative to other Canadian institutions,” he said. “In a way, this is starting to say, let’s put us on the same page and measure the same thing—that should be a good thing for all institutions so that we all have common metrics.”

The Economic Impact of the University of Alberta: A Comparative Approach represents the first in a series of studies by Briggs and co-author Jennifer Jennings to gauge the university’s impact on the broader society. Samarasekera said the results exemplify the U of A’s promise to “uplift the whole people,” a promise fulfilled by the extraordinary people who push the boundaries of research, innovation and entrepreneurship for the benefit of Alberta and the global economy.

U of A has $12.3-billion impact on Alberta economy
Newsroom