U of A lab discovers game-changing disease process in MS 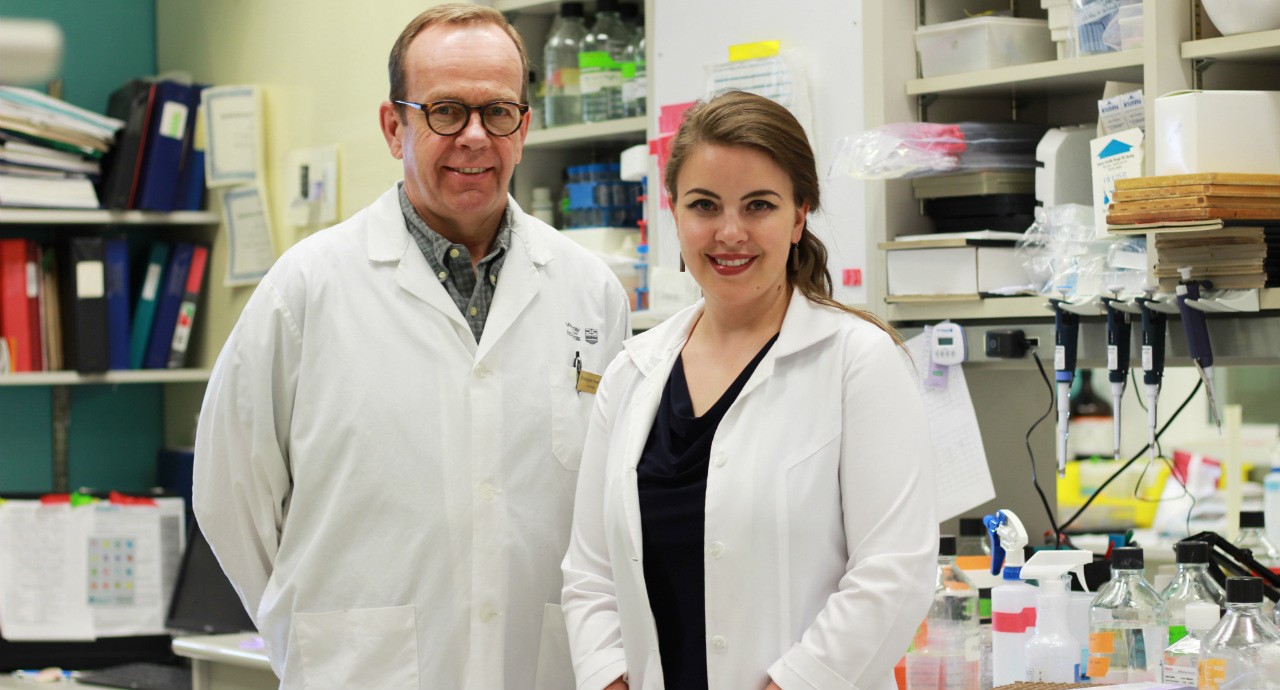 While discovering a unique process of brain cell death that affects the cells most vulnerable in multiple sclerosis, researchers at the University of Alberta may have also found a drug that could potentially treat patients with the debilitating disease.

U of A neurologist Chris Power and his research team identified pyroptosis, or fiery death, by using VX-765, a drug that blocked the enzyme in the brain that is responsible for the process.

Power’s lab found that the drug protected oligodendrocytes, the cells that insulate nerves in the brain and are susceptible to damage in MS. VX-765 is currently in clinical trials for epilepsy.

“We think this drug would break the cycle of neurotoxic inflammation and thus prevent future loss of brain cells in MS,” said Brienne McKenzie, first author on the study and a PhD student in the U of A’s Faculty of Medicine & Dentistry.

Power and his team believe identifying this mechanism also opens the doors to new indicators for monitoring disease progression of MS, which has been challenging since symptoms can vary widely between patients.

“Existing MS treatments work to reduce inflammation, but there is nothing that targets the brain cells themselves,” said Avindra Nath, clinical director of the National Institute of Neurological Disorder and Stroke at the National Institutes of Health in Bethesda, MD. “This paper identifies a clinically relevant novel pathway that opens the doors to new therapeutic targets that prevent cell damage.”

“This could be a game changer, because we discovered a fundamental mechanism by which brain cells are damaged in MS that couples inflammation with neurodegeneration,” said Power, who is also co-director of the UAlberta MS Centre and lead author of the study. “The drug, VX-765, is already known to be safe in humans.”

MS is a common disease of the brain and spinal cord that affects people in the prime of their life. There is currently no curative treatment for MS and its cause remains unknown. On average, 11 people with MS are diagnosed daily and Alberta has one of the highest rates of the disease in the world.

The study marks the first molecular analysis of pyroptosis in the human brain. Pyroptosis is a type of programmed cell death that is associated with inflammation, but its role in MS was previously unknown. Power’s lab was able to show pyroptosis in both brain tissues from MS patients and in lab models of MS.

“The study’s findings make a key contribution to the MS field in identifying a novel mechanism that contributes to progression in MS,” said Karen Lee, vice-president of research at the MS Society of Canada. “The MS Society of Canada is encouraged by the results of this study and what it means for people living with MS—hope for another avenue through which treatment options can be explored to stop MS in its tracks.”

The study was a collaboration with a laboratory at the National Institutes of Health in Washington, D.C. The MS Society of Canada and the University Hospital Foundation provided funding support for the research.

The study, "Caspase-1 Inhibition Prevents Glial Inflammasome Activation and Pyroptosis in Models of Multiple Sclerosis," was published in PNAS on June 12.

U of A lab discovers game-changing disease process in MS