U of A lab testing technologies to better train surgeons

“Better surgical training translates into better patient safety”: U of A Surgical Simulation Research Lab aims to train next generation of surgeons through advanced technology. 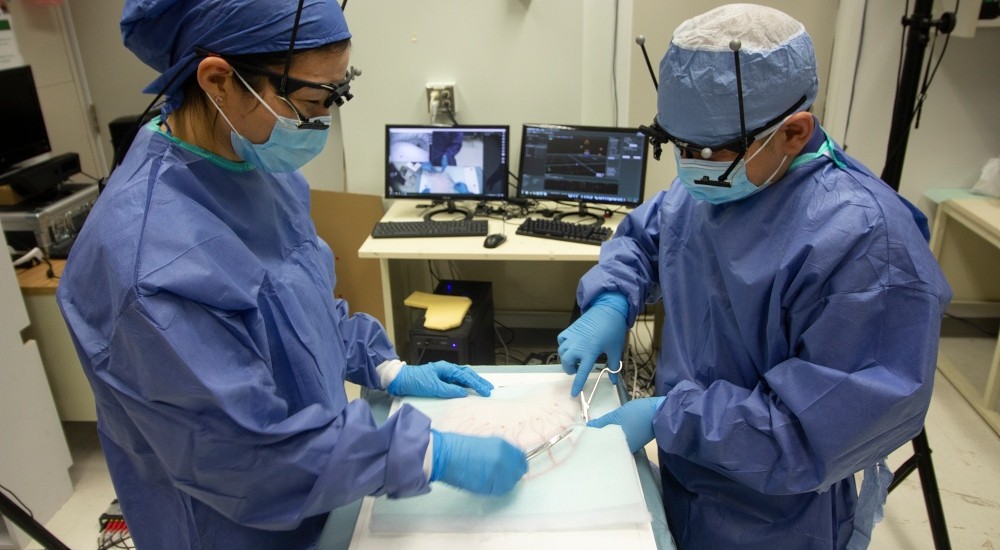 Wenjing He (left) and Xianta Jiang "operate" on a virtual patient in the U of A's Surgical Simulation Research Lab. The researchers wear headsets with cameras that record what they're seeing and track their eye motions during the procedure to assist in surgical training. (Photo: Jordan Carson)

Wenjing He fixes her eyes on the patient, contemplating her next action. Outfitted in a blue surgical gown, mask and gloves, she looks every part the surgeon. Across the table, her partner Xianta Jiang carefully reaches forward with scissors, delicately making a cut in the material in front of him. Both wear a headset with two cameras attached. One camera films what the wearer is looking at; the other records the wearer’s eye itself.

He and Jiang are not practising surgeons here in Canada. He completed her surgical training in China and is now pursuing a PhD. Jiang holds a PhD in computing science from Simon Fraser University and is now working as a post-doctoral fellow. The pair are part of a research team in the University of Alberta’s Surgical Simulation Research Lab (SSRL), working to improve the training of surgeons in the future.

“I would say over 90 per cent of resources in a health-care system are used to study diseases and patients. But our lab is looking at issues related to the operator,” said Bin Zheng, associate professor of surgery at the U of A and Alberta Health Services Chair in Surgical Simulation, who leads the SSRL. “We take a unique approach to health care by having surgeons as our subjects in our lab. Better surgical training translates into better patient safety.”

Over the past seven years, Zheng’s mission has been to develop more impactful training for surgical residents. While the SSLR lab space itself is nothing to call home about—just a small beige room with benches, tiny workspaces and an attached office, nestled in a worn, out-of-the-way location in the U of A’s Heritage Medical Research Centre—the technology and ideas on display are breathtaking.

The team is made up of physicians, physicists, computing scientists and engineers hailing from China, Iraq, Colombia, Uzbekistan and Canada. There are three graduate students, including one PhD candidate, two visiting professors and a few undergraduate students. Each one brings their unique perspective, passion and expertise to the project.

“We use technological equipment that is fascinating for a lot of people, such as eye tracking, augmented and virtual reality,” said Paola Sanchez, a master’s student in surgical education who helps manage the SSRL. “However, you quickly become accustomed to it. I am more enchanted with the ideas, projects and the ways that we can employ technology in medical and surgical education. That’s what is really fascinating for me.”

The lab has several projects in the works, each focused on helping new surgical residents quickly learn the skills needed to become expert in their craft. Some researchers have suggested recording video and audio in operating rooms to trace back the source of problems after they occur. Zheng’s team takes a different approach.

Among the projects is the one demonstrated by He and Jiang. Zheng describes it as the OR Black Box, taking a cue from the black boxes found in airplanes that can be analyzed to understand errors that lead to a crash.

“There are a few disadvantages behind this video-based black box. First, surgeons do not like being watched by the video in the operating room. Second, video evidence is good for analyzing the problems post hoc, but has limited power to prevent errors from happening,” said Zheng.

“We believe a true black box in the OR should provide a stream of digital data that can track down the movement of surgical tools and surgeons’ vision, and can be analyzed by the computer constantly without adding extra observers. This is what we set up in the Surgical Simulation Research Lab.”

A motion tracking system monitors the surgeon’s body and tool movement on multiple points. The surgeon’s eye movement is also monitored with multiple eye trackers to detect when errors happen due to a lack of surgical team co-ordination.

AR in the OR

Augmented reality exploded into the mainstream in 2016 with the release of the video game Pokémon Go. In the game, users accessed the camera on their smartphone to “find” and “capture” creatures in real-world environments. The technology, which essentially displays information over real-life settings, is being adapted in new ways in health care.

In the SSRL, researchers are using AR technology along with eye tracking to teach surgical procedures. During the practice of a surgical procedure, trainees wear a hands-free augmented reality device on their heads. The device is called HoloLens, and Zheng’s team has implanted a set of three cameras to it to track the user's eye movements. Through eye tracking and augmented reality, the learner can receive instructional messages on the lenses of the AR goggles while performing the surgical task they experience difficulty in doing.

“For example, if I ask you to do a chest tube insertion and you find a step to be difficult, you will likely start looking around trying to think of how to continue the procedure,” explained Sanchez. “At that moment, the learner is no longer engaged in the task, and we can capture this moment on the eye movements recorded by the eye tracking. By detecting the moment when the person needs some help, we can intervene. Instead of looking at the instructions again or watching the instructional video on the computer, the learner can have the information about the task displayed on the HoloLens in real time.”

“We are able to detect those teachable moments and then trigger the computer to project instructional knowledge to help you to learn, to facilitate your learning process,” added Zheng.

Other research being done by undergraduate engineering student Bassam Nima includes a plan to monitor the brainwaves of surgeons to automatically detect when they become fatigued during a procedure. If fatigue is detected, surgeons could then take a short break to refocus—making the surgery safer for the patient.

Going through the motions

The team is also using haptic training as a means of quickly training the muscle memory of young surgeons who need to perform complicated procedures with great dexterity.

“Experts can do these procedures almost effortlessly,” said Zheng, “but how can we recall all his or her hand motions and translate them to a novice? That is quite a challenge.”

The SSRL team built a system to record an expert’s hand motions and translate those exact motions digitally into a second station, where a novice learner could feel what the experienced surgeon did and then try to copy the action—rather than simply try to simulate the action from verbal instruction. Zheng believes the technique will greatly speed up the acquisition of complicated dexterity skills.

“It’s like you're putting your hands into the gloves of the expert. Just passively receiving that information from an experienced surgeon can help learners gain the skills they need more quickly by speeding up the natural learning curve,” said Zheng.

The Royal College of Physicians and Surgeons of Canada is funding the SSRL to find evidence of using haptic feedback to train surgical skills.

While the work underway holds great promise, it still remains in the research phase and is not currently in use training surgical residents. The researchers in the SSRL believe it’s only a matter of time before the technology and techniques they are innovating become standard practice in surgical and medical education.

Zheng believes that time is not far distant and he is already envisioning the future of surgical training in Alberta.

“We need to have a simulation lab open for our surgical residents 24 hours a day, seven days a week,” said Zheng. “The goal for the future should be to have a regional simulation centre, allowing every single surgeon to practise a set amount of time before getting a surgical licence or renewing their licence for the next year—pretty much like how aviation works. We’re not there yet. We need a little more study looking at how much simulation can translate into clinical practice. But we’re getting closer.”

U of A lab testing technologies to better train surgeons