U of A law students win international moot court competition

Representing Canada, U of A team goes undefeated to win Commonwealth competition for first time. 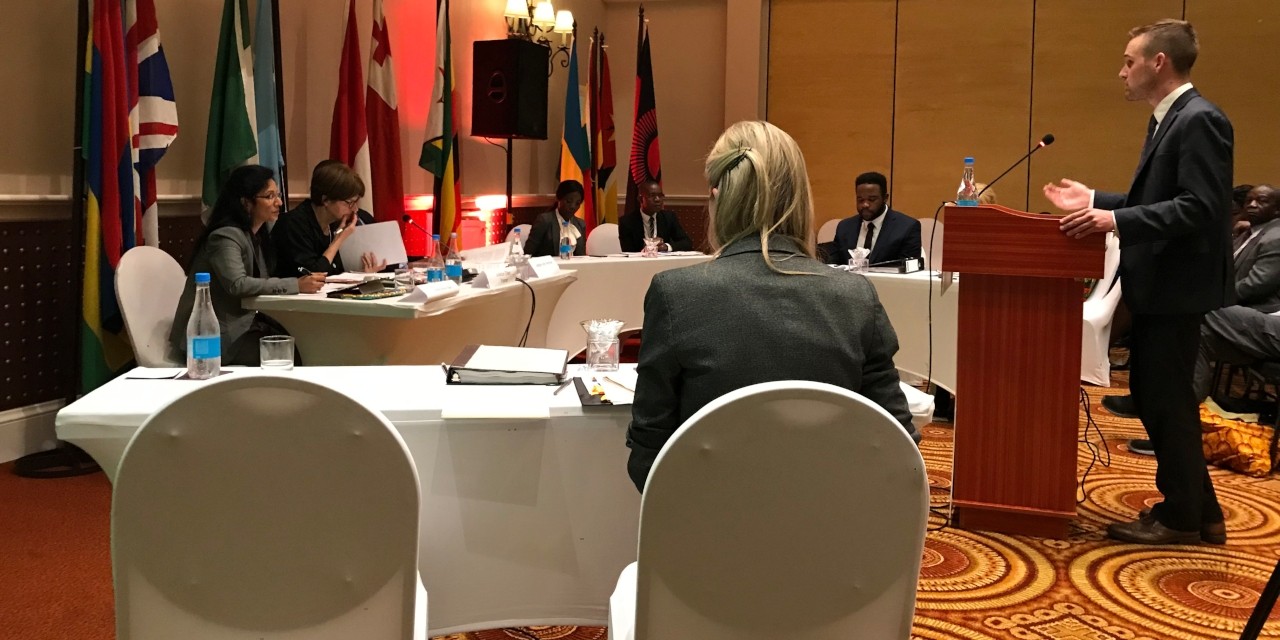 U of A law student Dylan Hanwell makes an argument in the final round of the Commonwealth Moot in Livingstone, Zambia, as teammate Leah Strand (foreground) looks on. The U of A team won the international competition for the first time and is only the fourth Canadian team to win since 1983. (Photo courtesy of Peter Sankoff) .

Thanks to some creative arguments and reasonable positions, a team of University of Alberta law students representing Canada won the Commonwealth’s most prestigious moot competition late last week in Livingstone, Zambia.

Leah Strand, Dylan Hanwell and researcher Nate Gartke triumphed over the United Kingdom’s team in the final round of the 16th Commonwealth Moot competition after beating Australia in the semifinals. Strand was also named “best mooter of the final round.”

Strand said the team gained an edge by adopting arguments that could withstand tough scrutiny by the judges.

“The importance of the substantive argument can’t be understated,” she explained.

Moot competitions are simulated court proceedings at the appeal court level, where law students argue before judges, not juries.

The teams argued a simulated case concerning international human rights law. A fictional country had detained journalists and conducted secret surveillance on its citizens. A case was brought against the state and each team had to prepare arguments for both sides, defending the state’s justification in some rounds and arguing it had breached international human rights law in others.

The team went undefeated throughout the contest, besting India in the first round and Zambia in the second.

This is the first time the U of A has won the prestigious international competition since it began in 1983 and the fourth time for a Canadian representative.

The U of A team qualified for the Commonwealth Moot when Strand and Hanwell won the Gale Cup, Canada’s premier criminal moot competition, last February. Gartke and Leigh Acheson also participated in that competition as the second pairing from the U of A. That win was the school’s second victory at the Gale Cup in two years. However, the Commonwealth Moot is only held every two years, so last year’s winners did not compete internationally.

The team had about seven weeks to prepare for the Commonwealth Moot, compared with almost five months for the Gale Cup.

“We have to thank our coaches (criminal lawyer and law professor Peter Sankoff and Mandy MacLeod, a Crown prosecutor with Alberta Justice), Nate Gartke, and U of A international law professors Joanna Harrington and Linda Reif, among many others,” said Strand.

Sankoff, who accompanied the students to the competition in Zambia, was very pleased.

"It was magical to see them execute their performance in front of some of the Commonwealth's top judges," he said. "This was a transformative experience for our students, and we couldn't be more proud of what they accomplished.”

The U of A team was supported by Beresh Law who sponsored the Gale Cup team, as well as McCarthy Tétrault, Miller Thomson LLP, and members of the Alumni Council whose total support was matched by the university’s Alumni Relations office. The team also received support from numerous individuals, including former mooters.

U of A law students win international moot court competition