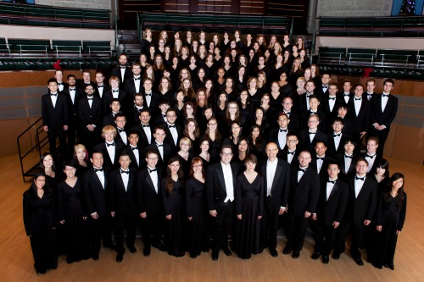 Community leaders: the U of A Mixed Chorus (Photo: Ken Chow Photography).

U of A Mixed Chorus honoured for serving communities through music

The University of Alberta Mixed Chorus performs in concert April 25, 2014. The student-run ensemble received the university's Community Leader Award for its legacy of creating friendships and serving communities in Alberta and beyond through the uplifting power of music.

(Edmonton) For 70 years, the University of Alberta Mixed Chorus has serenaded all corners of the province, sharing a love of song that has created a happy legacy of community service, lifelong friendships and ambassadorship for Alberta.

“Whatever our personal reasons, we want to sing, to share with the community and along the way, we become friends and family,” said Kevin O’Connell, president of UAMC.

“The U of A Mixed Chorus is a family and that’s why it has gone on for 70 years.”

For its long-standing devotion to making a joyful noise and serving communities in Alberta and beyond, the UAMC is the 2014 recipient of the University of Alberta’s Community Leader Award, as part of the U of A Community Connections Awards.

The Community Leader Award recognizes an individual or team of U of A employees, post-doctoral fellows or students who have made a valuable contribution to bridging the university’s commitment to learning, discovery and citizenship with the community. It honours those who showcase the university as a place of community by participating in public speaking events, visiting schools or volunteering with community groups while carrying forward the U of A promise of “uplifting the whole people.”

The student-run choir, begun on campus in 1944, has become more than just a group of songsters. It has evolved over the decades into a multi-generational family of friends—some of whom go on to marry and whose children later join the choir’s ranks—as they volunteer to sing their hearts out for audiences large and small.

One of those most involved with the chorus is conductor Robert de Frece. Now a retired U of A music education professor, he came full circle with the group, singing as a student from 1967 to 1971 and then taking up the baton in 1986. He also met his wife in the choir, and their daughter later sang in it for seven years.

“I feel very fortunate that I have been able to have the U of A Mixed Chorus as an important part of my life for four years as a member and 28 years as its conductor,” de Frece said. “I feel blessed to have had the privilege of working with these wonderful young people who represent the University of Alberta so proudly. There is something magical and organic that happens when people join their voices to sing choral music—the whole really is greater than the sum of its parts. On a number of occasions, members of the chorus have told me that they might have dropped out of university were it not for the community that they found in the UAMC.”

Underpinning all the fun and fellowship is a commitment to brighten the communities they serve through the music they love to make.

The group—150 voices strong this year—performs music ranging from Renaissance and Baroque motets to Broadway tunes, then performs in a steady round of visits to community halls, churches and concert stages arranged through local performing arts groups.

“Our aim is to bring music to the people, not just in Edmonton where we are based, but also to those in small communities around Alberta and in other provinces who don’t necessarily get the opportunity to hear performances from a large choir,” said O’Connell.

Sometimes the choir outnumbers the audience, but that’s all the better, he added.

“Smaller audiences are often more excited about our performances because it’s new and amazing for them.”

“When we go on tour, it instils in us that we are ambassadors for the University of Alberta, for our city, our province and even our country,”. We are showing who we are as Albertans.”

Over the years, the chorus has loaded buses for its annual spring tour (this year to the Yukon) with an electronic keyboard, drums, basses and handbells, and toured communities in Alberta, British Columbia, Saskatchewan,Manitoba, the Northwest Territories and, one year, all the way to Thunder Bay, Ont. “We’ve been to every province from Ontario to the Pacific,” O’Connell said. The chorus has also toured in the states of Montana, Idaho, Washington and Oregon.

The chorus also lights up hearth and home, performing yearly for the University of Alberta’s Festival of Nine Lessons and Carols at the Winspear Centre and Strathearn United Church, as well as for the U of A community during fall student orientation, and has even popped up at an occasional Oil Kings or Edmonton Eskimos game to sing.

Visits to elementary schools are a favourite stop on any tour.

“We want to show students that music is fun, that they can join a choir, and we try to get them pumped for it.” During the musical visit, the chorus leads singalongs or back-and-forth songs, youngsters get on stage to help conduct, and the place starts to rock.

“At first, kids may think choir is kind of lame, but when we break through to them and they sing and dance along, we can see how excited they are, and that’s awesome,” O’Connell said.

Some even go on to join the chorus as university students, which provides them a safe space to sing, to make friends and to chase away big-campus loneliness.

“I met some of my best friends in life here,” said O’Connell, a chorus member for the past seven years. “This is perhaps the first social situation students have moving from home. We have fun, we are a high-energy group, and everyone is welcome. It doesn’t matter if you don’t belong somewhere else, you belong here.”

As a student-run group, the chorus consists largely of undergraduates and a sprinkling of U of A staff and alumni, led by an executive elected from its membership. And as they learn to harmonize, they also learn about citizenship.

“When we go on tour, it instils in us that we are ambassadors for the University of Alberta, for our city, our province and even our country,” O’Connell said. “We are showing who we are as Albertans.”

Video: U of A Mixed Chorus sings at awards ceremony

U of A Mixed Chorus honoured for serving communities through music