U of A mountain high 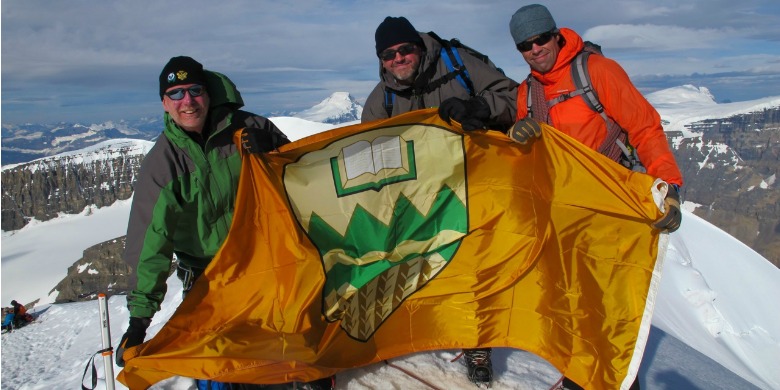 (Edmonton) The University of Alberta is launching one of the most innovative research and learning opportunities for students and scholars from around the world—but in many ways it’s as old as the hills.

“Our mission is to make the University of Alberta the epicentre for mountain studies,” says Zac Robinson, an alpine historian in the Faculty of Physical Education and Recreation. “This interdisciplinary initiative we’ve launched—which we hope soon to make an institute—aims to conduct and promote mountain studies research and learning across all disciplines. Our hope is to offer a rich and deeply nuanced experiential learning for students, both on campus and in the mountains, and to attract mountain scholars from around the world.”

Community partners include Parks Canada, B.C. Parks, the Alpine Club of Canada, the Banff Centre and the Alberta Wilderness Association, among others.

Robinson said community partnerships will grow well beyond Canada’s borders as connections are forged with other organizations, institutions and universities around the globe.

The initiative germinated in 2009. “A few of us met informally, and within minutes we’d begun to suspect that the university already housed almost world-class strengths in interdisciplinary mountain studies from across the human, social and the applied sciences,” says Faculty of Arts professor Stephen Slemon, an expert on mountaineering literature and culture.

“We discovered U of A people working across an incredible spectrum of mountain studies,” says Slemon. “Visitor behaviour in the national parks, glacier and climate behaviour in the Himalayas, empire and mountaineering, mountaineering literature, history, women and art history, ecology and tourism, altitude physiology, mountain exploration. This university already had it all! And then we discovered something even more wonderful and unexpected. The natural scientists really wanted to talk to humanities researchers, and vice versa. Everyone said the same thing: they wanted their students to have access to these other kinds of knowledge.”

The fledgling group showcased its research strength with the successful “Summit Series” of public lectures. Summit Series co-organizer, Liza Piper, a professor in the Department of History and Classics, says: “We wanted to put our mountain people in direct conversation with one another—environmental historians with glaciologists; altitude physiologists with phenomenologists; climate scholars with anthropologists—and the public reception was wonderful. Academics attended, of course, but so did the MEC (Mountain Equipment Co-op) crowd, members of the local Alpine Club section, and the Edmonton climbing community. There was huge appeal, which signalled an immediate call to action.”

With a goal to “collectivize,” Slemon says, “our plans required institutional support.” The group found a champion in Kerry Mummery, dean of the Faculty of Physical Education and Recreation, whose dream was to develop just such an institute. Mummery says the U of A is perfectly positioned to steward the initiative.

“To me, this is the exciting first step towards the formation of an internationally-recognized institute focusing on the mountains,” says Mummery. “With our proximity to the Canadian Rockies, and a large, established cohort of inter-disciplinary scholars dedicated to understanding mountains in a range of contexts spanning the arts and sciences, and in relation to each other, we are superbly positioned to bring students, faculty members and the community together in a very exciting, emerging discipline that promises to vastly enrich the global understanding of mountain practices, places and peoples.

“The Mountain Studies Initiative represents an extraordinary ‘world-first’ for the University of Alberta.”

Plans are already sweeping ahead. The Faculty of Physical Education and Recreation is in the initial stages of proposing a new certificate in interdisciplinary mountain studies. New undergraduate courses are under development. And the Canadian Mountain Studies Initiative cohort is rapidly evolving plans to establish a site in the mountains for experiential learning and a research base in the Canadian Rockies.

“Ten years ago, during the International Year of Mountains, the state of mountain regions rose to the top of the world agenda. Since then, scholars at the University of Alberta have continued to make important contributions to our understanding of mountain environments and peoples,” says David Hik, professor in the Department of Biological Sciences.

In 2012, on the 10th anniversary of the International Year of Mountains, the group will host a Thinking Mountains Conference to examine progress towards meeting the original objectives set out in 2002 and to celebrate International Mountain Day, but also to place on view the best scholarship on mountains from the sciences and arts. “The conference,” says Hik, “will provide a unique forum to encourage and facilitate interdisciplinary research in mountain areas in Alberta, Canada, and around the world.”

U of A mountain high
Newsroom