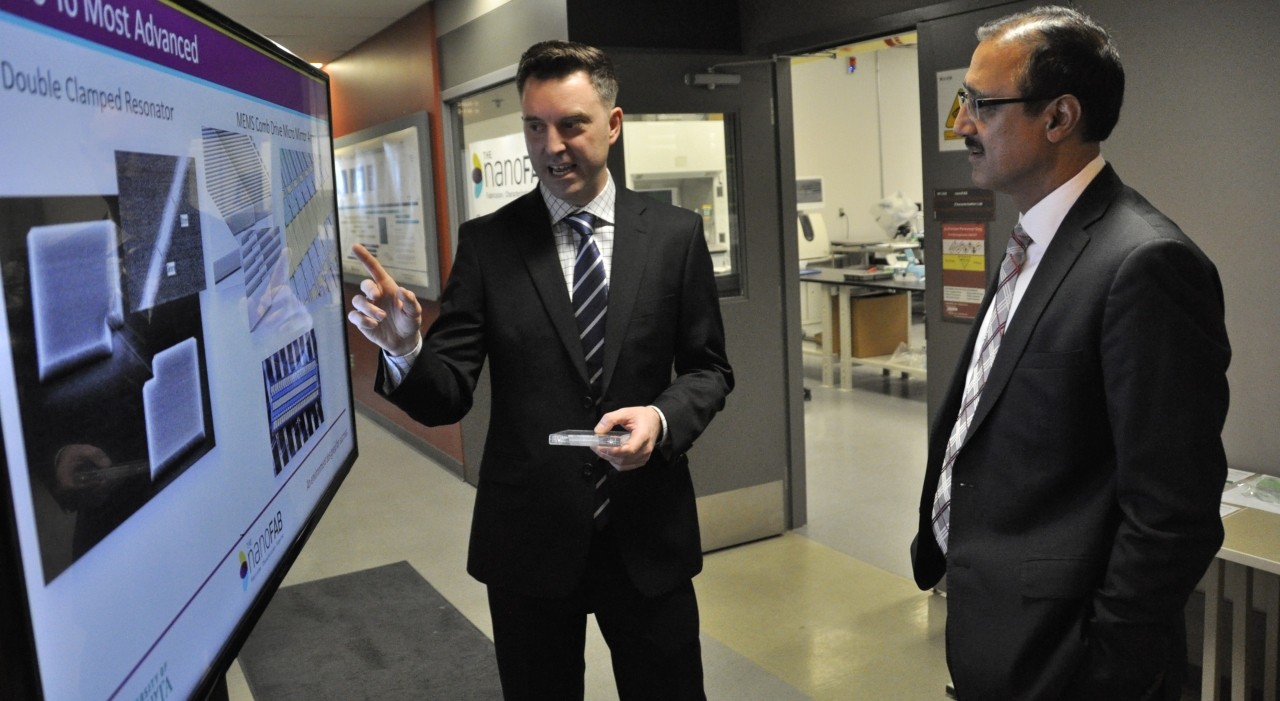 NanoFAB director Eric Flaim (left) shows Natural Resources Minister Amarjeet Sohi some of the devices nanotechnology companies can manufacture at the U of A facility, which received a total of $3.4 million in new funding today to expand its capacity to commercial scale. (Photo: Michael Brown)

Microscopically thin films of metal are essential to tiny biomedical devices placed in the human body to monitor vital signs, diagnose disease or even restore eyesight.

Every micron of the film has to be carefully placed on the device’s sensor, which means manufacturing on a commercial scale is a daunting challenge.

But thanks to a $3.4-million investment in the University of Alberta’s nanoFAB facility by the federal and provincial governments—as well as by Micralyne Inc., a local company that builds nano-devices for biomedical applications—commercializing nanotechnology research has become much easier.

The funding will be used to purchase a high-volume deposition tool used for applying thin films, along with contact aligners and etching tools—all of which will allow companies to manufacture devices quickly by the thousands.

“We've been moving wafers and chips along manually, but we were missing a way to move thousands along on a regular basis,” said Micralyne president and CEO Ian Roane at today’s funding announcement.

“These tools we're buying allow us to really scale up," he said, adding that his company plans to hire 50 or 60 more employees to meet expected demand once the tools are up and running.

“We have a commitment from a very large biomedical company that plans to repatriate production back to Canada,” added Roane. "This is a way of keeping our highly qualified professionals in this province.”

Some of the biomedical devices Micralyne manufactures include tiny sensors that measure blood pressure in the body or brain pressure in the skull, or restore eyesight using small needles implanted behind the eyes, said Roane.

The $1-million federal portion of the funding is part of Canada's Innovation and Skills Plan aimed at creating new jobs for the global economy.

"Our investment in the University of Alberta will make nanoFAB a cornerstone of the regional innovation ecosystem,” said Amarjeet Sohi, federal minister of natural resources, who announced the funding on behalf of Western Economic Diversification Canada.

“It will help firms develop new micro- and nanotechnology while creating well-paying jobs and prosperity for Canada.”

The Alberta government will also contribute $1 million for the tools, and Micralyne will pitch in $1.4 million.

"Industry partners like Micralyne look for interesting research coming out of the U of A, hoping to scoop those up, add them to their manufacturing portfolio and sell them all around the world," said Eric Flaim, director of nanoFAB, a national, open-access training, service and collaboration centre supporting research and development in nano sciences and engineering.

“There comes a point in your research where being able to work on these kind of ideas becomes limited by the reliability, repeatability and uniformity of what you're actually making,” he said.

“These tools will increase researchers’ ability to make more reliable devices, while creating a pathway for those products to be moved into industrial manufacturing.”

In addition to biomedical devices, micro- and nanotechnology developed at the U of A is used in a range of applications in life sciences, clean technology, digital technology and other sectors.

"U of A researchers are working at the forefront of micro- and nanotechnology,” said U of A president David Turpin. “With industry and government support like we're seeing today, we are shaping a world-class innovation and manufacturing sector right here in Alberta."