U of A next chapter in top student's success story 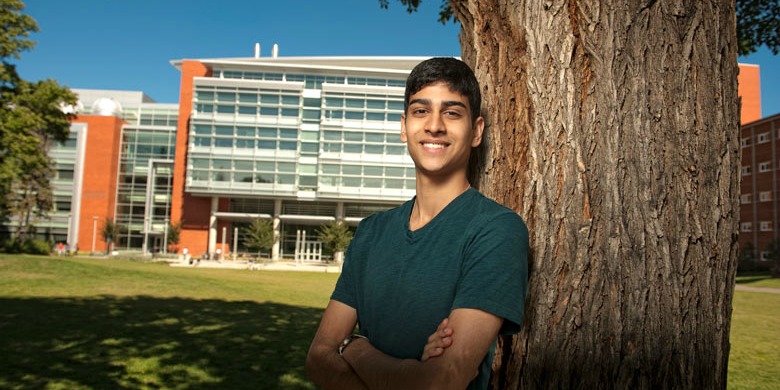 120925-qadeemsalehmohamed-banner
Qadeem Salehmohamed is the recipient of the 2012 President's Centenary Entrance Citation. The four-year, $50,000 undergraduate scholarship will allow him to focus on his goal of becoming a pharmacist. (Photo: Richard Siemens)

(Edmonton) By any standard, Qadeem Salehmohamed is already successful, even before he starts first-year classes at the University of Alberta.

The 18-year-old begins a general science degree this fall with dreams of studying pharmacy—and a major scholarship from the University of Alberta to help him on his way.

Salehmohamed is the recipient of the U of A’s 2012 President’s Centenary Entrance Citation, the university’s most generous undergraduate scholarship, worth $50,000 payable over four years. Combined with a sprinkling of other bursaries he has earned, the scholarship eases his financial worries.

But that success isn’t foremost on this young man’s mind; instead he is humbled by the faith shown in his abilities, to earn the trust and the dollars of kind-hearted donors.

“I am grateful, almost beyond words,” said Salehmohamed. And even though he put pen to paper to write letters of thanks for his scholarships, “It was really hard to describe the gratitude I feel to these people.”

Salehmohamed is one of several top U of A students, faculty and staff being honoured at the university’s annual Celebrate! Teaching, Learning and Research event Sept. 27.

The Surrey, B.C. resident is happiest for his parents—Kenyan immigrants to Canada who made their own sacrifices to ensure a better life for Salehmohamed and his older brother.

“They came here in the 1980s with pretty much nothing, and it was very hard for both of them. Mom had to drop out of college to support my dad’s education.” Salehmohamed’s mother worked as a telemarketer and then in data entry to make ends meet while his father studied computer science full-time and eventually earned a master’s degree.

“Getting these scholarships really allows my parents to step back and not worry financially anymore, and now they get a chance to enjoy their lives properly.”

Salehmohamed also credits his parents’ experience with his desire to become a pharmacist. “After hearing their story, I wish there had been someone there to help them and I think that if I can make a job out of helping people, that connection to me is important.”

The honours student, who graduated first in his Grade 12 class of 250 people and maintained an average grade of 99 per cent in high school, feels pharmacy is an effective way to help many people.

“It is a cool thought that a pill the size of a pea can do amazing things, from hormonal treatments to curing disease.”

Salehmohamed chose to attend the U of A after doing some homework to satisfy himself that he was coming into a top program.

“I found out that in 18 of the last 20 years, students from the University of Alberta have placed first in the National Examining Board of Canada’s examinations. This reputation for high achievement is extremely appealing. I wanted to go to a school that really knew what it was doing, and that’s the U of A for me.”

Besides juggling his high-school career, Salehmohamed also volunteered at a local hospital visiting patients, founded a scholarship program at his school, and served in a community youth club. Striking a balance is key, and if there is a secret to success, it is quite ordinary, he said.

“It’s just hard work. You have to look at it, know what you have to do and just do it; it’s as simple as that.”

Salehmohamed said he can’t wait to get started on the next leg of his life’s journey.

“The U of A is the next chapter in my life—a new place, new friends, new people.”

Everyone is invited to attend the Celebrate! Teaching, Learning and Research event, which begins at 4 p.m. Sept. 27 in the Myer Horowitz Theatre. There is no cost to attend, but please RSVP to the Academic Awards and Ceremonies Office at 780-492-2449.

U of A next chapter in top student's success story