New students are flocking to the Indigenous Canada MOOC to help understand systemic racism and social inequities, say experts behind the course. 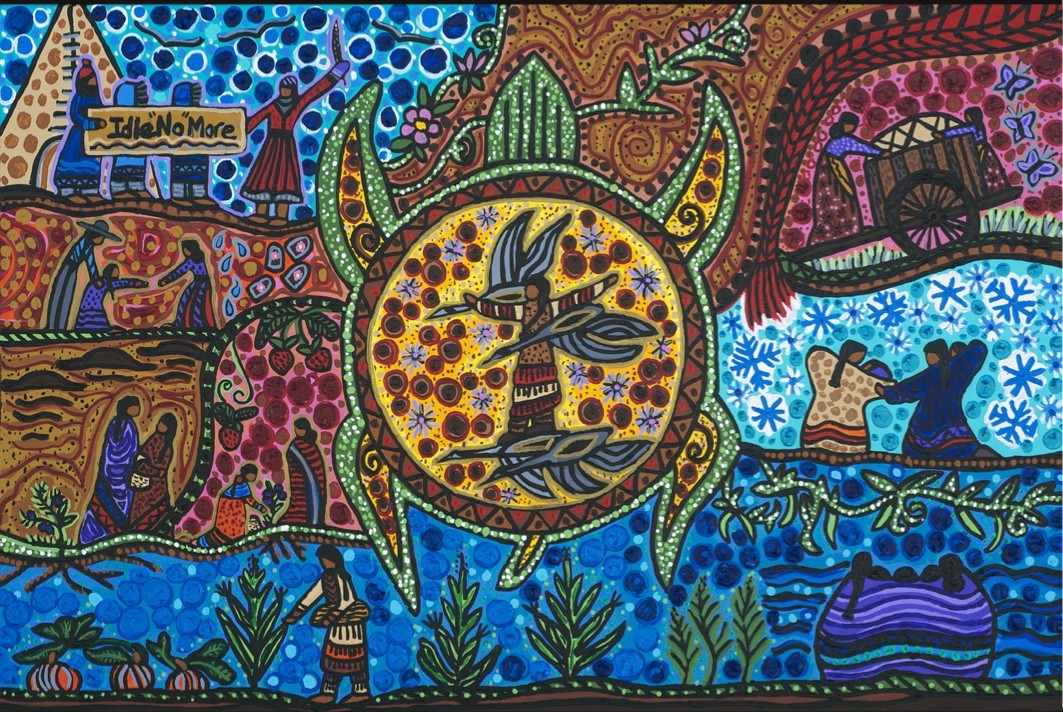 Indigenous Canada, a free online course from the U of A that teaches Indigenous histories and contemporary issues from an Indigenous perspective, is seeing thousands of new students sign up every week. (Image: "A Tribute to Aboriginal Women," by Leah Dorion)

Since its launch in 2017, the massive open online course Indigenous Canada has been among the most popular MOOCs in Canada but in the first half of 2020, its popularity has skyrocketed.

“It all started in March with COVID,” said course instructor Paul Gareau, an assistant professor in the Faculty of Native Studies. “Normally around 300 new students register each week, but in March we started getting around 1,000. Then, when Black Lives Matter started to hit the news, those numbers jumped to over 5,000, and one week there was over 10,000. Since then it’s been over 5,000 every week.”

The connection between Black Lives Matter—a grassroots movement that advocates for an end to police brutality and all racially motivated violence against Black people—and increased interest in Indigenous perspectives can be understood through structural racism that marginalizes Black, Indigenous and people of colour (BIPOC), said Gareau.

“People are looking for Indigenous content because they want to understand systemic racism. So where do you turn? You have to turn to the internet. So (Indigenous Canada) has been a really straightforward way to do that education work.”

Tracy Bear, the academic lead in the development of the course, said an important piece of the MOOC’s popularity is that it offers a perspective not easily found in history or textbooks.

“All the presenters, the texts, all of it is coming from an Indigenous perspective. So I think people are seeking out information that comes from Indigenous minds, and they’re finding it within the MOOC,” said Bear, who is an assistant professor in the Faculty of Native Studies and the Faculty of Arts.

On Aug. 17, television star Dan Levy shared via social media that he was taking the course for that perspective, saying “we need to actively relearn history, history that wasn’t taught to us in school.”

Come learn with me? I’ve signed up for a (free) course through the University of Alberta called Indigenous Canada. 12 lessons that explore Indigenous histories and contemporary issues from an Indigenous perspective.

This little video explains it all. Sign up via link in my bio! pic.twitter.com/LccboMO8X2

Indigenous Canada teaches Indigenous histories and contemporary issues from an Indigenous perspective and is intended for a general audience. Many Indigenous people have found relevance in the course, especially those who have lost track of their relations or connection to culture, Gareau noted.

“Every opportunity to hear Indigenous voices offers a closer and better relationship with Indigenous peoples, and that in itself is good allyship: good relations.”

But it’s not a silver bullet, Gareau said. It’s more like a first step.

“The problem is people are like, ‘We never knew.’ That’s constantly the byline for people’s relationship with Indigenous-anything. Because settler colonialism never allowed for Indigenous voices to take centre stage. Even though, if you look at history in Canada, Indigenous people were central to settler activities,” Gareau explained.

Movements like Black Lives Matter do not exist in a vacuum, but rather are part of a consistent push back against oppressive voices and marginalization that mainstream culture sees only once in a while, said Gareau.

“This has actually been a moment of solidarity between Black peoples and Indigenous peoples. It’s part of a shared story of struggle, of pushing back against systemic racism. That’s why I think Black Lives Matter has sort of oriented the popularity of the course. Ultimately, it’s a white problem that people are trying to address.”