New research may solve a mystery that has puzzled scientists for nearly a century. 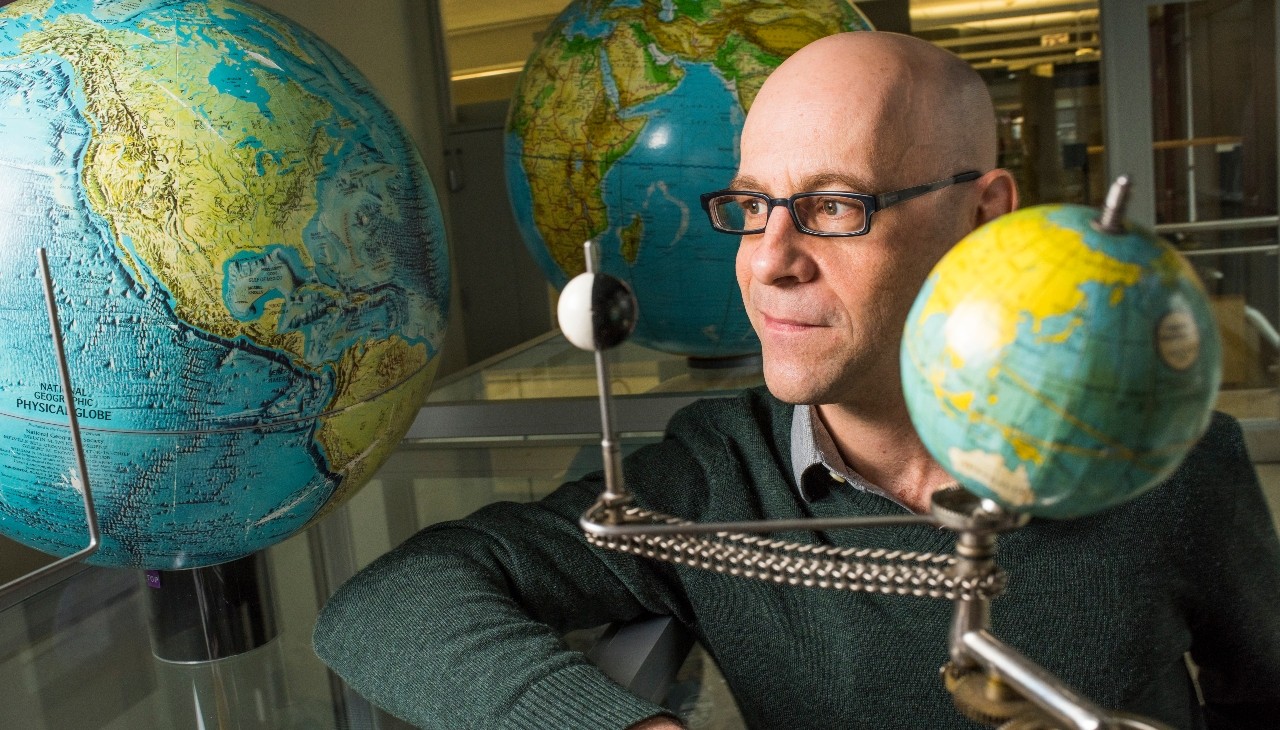 U of A geophysicist Mathieu Dumberry led a new study that may explain why changes to Earth’s protective magnetic field are weaker over the Pacific—a puzzling phenomenon scientists have been trying to figure out since first observing it in the 1930s. (Photo: John Ulan)
Mathieu Dumberry, Associate Professor Department of Physics, on December 9, 2015. Dumberry is focused on the physics of planetary interiors and the study of convective flows in spherical shell geometries, the generation and evolution of planetary magnetic fields, the rotational dynamics of planetary bodies and fluid-solid interactions at interior boundaries.

A new study by University of Alberta physicists provides an explanation for why changes to Earth’s magnetic field over time are weaker over the Pacific region—a mystery scientists have been trying to solve for nearly a century.

“This is something that has been a puzzle since the 1930s when it was first noticed,” said geophysicist Mathieu Dumberry, lead author of the study.

Like winds in the atmosphere or currents in the ocean, there are fluid motions in the liquid core of the Earth, Dumberry explained. These core flows generate and maintain the Earth’s magnetic field, which gives us the Northern Lights and shields us from charged particles from space. Scientists model the magnetic field for a variety of applications, including determining your orientation when you look at a map on your smartphone.

“Core flows are weaker under the Pacific and also feature a planetary-scale current that hangs close to the equator in the Atlantic region, but then is deflected to higher latitude in the Pacific region,” said Dumberry. “But why is that? That is the part that was not understood.”

Looking at the field can also give new insight into the core flows that create it, Dumberry said.

“Our explanation involves the electrical conductivity of the lowermost mantle,” said Dumberry. “We show that if the conductance of the lowermost mantle is higher under the Pacific than elsewhere on the planet, and this larger ‘magnetic friction’ weakens the local core flows, it also deflects the main planetary current flow away from the Pacific region as it avoids the region of higher conductance, leading to smaller changes in the Earth’s magnetic field in the region.”

Dumberry noted the model poses new questions about the makeup of the core-mantle boundary region and what it can tell us about other regions on Earth.

“Our study highlights that the core-mantle boundary region is quite heterogeneous. The conductance of the lowermost mantle is most probably not uniform around the globe,” he said.

“We hope that our results will motivate geophysicists to further investigate the possible differences between the Pacific region and elsewhere on the core-mantle boundary.”

The study, “Weak Magnetic Field Changes Over the Pacific Due to High Conductance in Lowermost Mantle,” was published in Nature Geoscience.