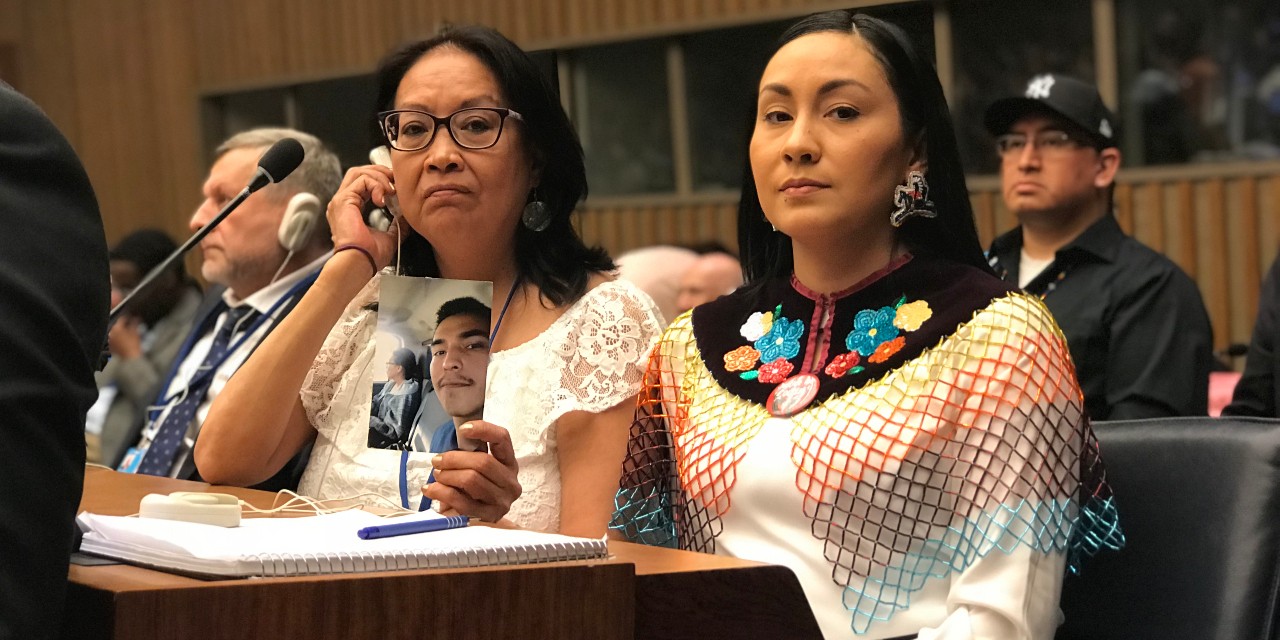 Colten Boushie's mother, Debbie Baptiste (left), and sister, Jade Tootoosis, at the United Nations in April 2018. U of A professor Tasha Hubbard's documentary film nîpawistamâsowin: We Will Stand Up traces the family's advocacy for change to Canada's legal system after Boushie's shooting death in 2016. (Photo: Melissa Kent/CBC Licensing)

When Gerald Stanley was found innocent in the shooting death of Colten Boushie in 2019, Tasha Hubbard’s cameras were already rolling.

Hubbard, a filmmaker and Indigenous studies professor in the Faculty of Native Studies, had been filming with Boushie’s family since 2016. She wanted to document their experience as they sought justice for their loved one through the provincial legal system, and hoped to provide historical and personal context on Indigenous life in the Prairies—including for her own family, in particular her son and nephew.

But when the not-guilty verdict came down, everything changed.

"My first reaction was the same as so many across the country. I felt gutted. I felt devastated for Colten's family. And I was and still am deeply concerned about what this means for Indigenous people and in particular, Indigenous men, and Indigenous boys like my son and nephew.”

That response also meant the film she was making would be something very different.

Boushie, a young Cree man from Red Pheasant First Nation, died from a gunshot wound after driving onto Stanley’s farm with his friends in August 2016. Stanley was charged and stood trial in 2019 for second-degree murder.

When Hubbard first learned of Boushie’s death in 2016, she was revising her PhD dissertation and finishing up work on her first feature documentary, Birth of a Family.

“I knew that his death, and the case around it, was going to have a big impact on Indigenous people, and Indigenous boys in particular,” said Hubbard.

She started an academic blog where she could work through and share her thoughts on the legal proceedings.

It was a family member who convinced her she should be making a film instead.

“I didn’t go into this intending to make a feature-length film,” said Hubbard, “but we never expected a not-guilty verdict.”

The film she eventually created is nîpawistamâsowin: We Will Stand Up.

It follows the Boushie family from the beginning of the legal process, through Stanley’s controversial acquittal, and continues with their pursuit of justice and drive for change on national and international stages, including visits to the United Nations and Canadian Parliament.

“The film captured the family as they turned their grief into advocacy,” said Hubbard.

One of the major changes the Boushie family strove for was an end to peremptory challenges, the right in jury selection for the attorneys to reject a certain number of potential jurors without stating a reason. The family said after the trial that peremptory challenges were used to keep visibly Indigenous people off the jury. In September 2019, their advocacy resulted in the passing of Bill C-75, which ended peremptory challenges in Canadian courtrooms.

Now, while still screening the film around the world, Hubbard and the Boushie family continue to advocate for change to Canada’s legal systems. They specifically want a royal commission or a United Nations investigation into how the justice system treats Indigenous people, said Hubbard.

“Many Indigenous filmmakers become advocates for the issues represented in their films. A good example is Alethea Arnaquq-Baril, the director of Angry Inuk. She still works on getting the seal hunt ban lifted, because of its impact on her community and communities in the North. Indigenous filmmakers offer support and become advocates, that’s just our way,” said Hubbard.

On May 25, nîpawistamâsowin won the Ted Rogers Best Feature Length Documentary award at the Canadian Screen Awards. Since its theatrical release in April 2019,the film has also won several other awards, including Best Canadian Feature Documentary at the 2019 Hot Docs Canadian International Documentary Festival and the Discovery Award from the Director’s Guild of Canada.

“I have complicated feelings about being the recipient of awards for this,” said Hubbard. “It’s not a film I wanted to have to make. I would rather Colten still be here with us. But I talked to Debbie [Baptiste, Colten’s mother] about it and she said, ‘No, it’s good that you’re winning these awards because it will encourage more Indigenous filmmakers, and we need more of them.

“‘We need more people to tell our own stories.’”

nîpawistamâsowin: We Will Stand Up is currently available for anyone to view in a 44-minute version on CBC Gem. The full-length version will air on APTN in the fall and will be available to stream on NFB, CBC Gem and APTN Lumi.

Watch the trailer for nîpawistamâsowin: We Will Stand Up