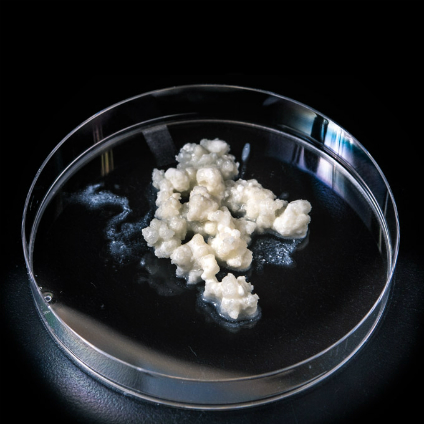 The researchers' healthier kefir grains are made up of "a cocktail of bacteria and four yeasts that are most common in traditional kefir." (Photo: Richard Siemens)

U of A researchers develop healthier recipe for store-bought kefir

Commercial brands of fermented milk drink don’t measure up to traditional varieties when it comes to health benefits, U of A microbiologists find. 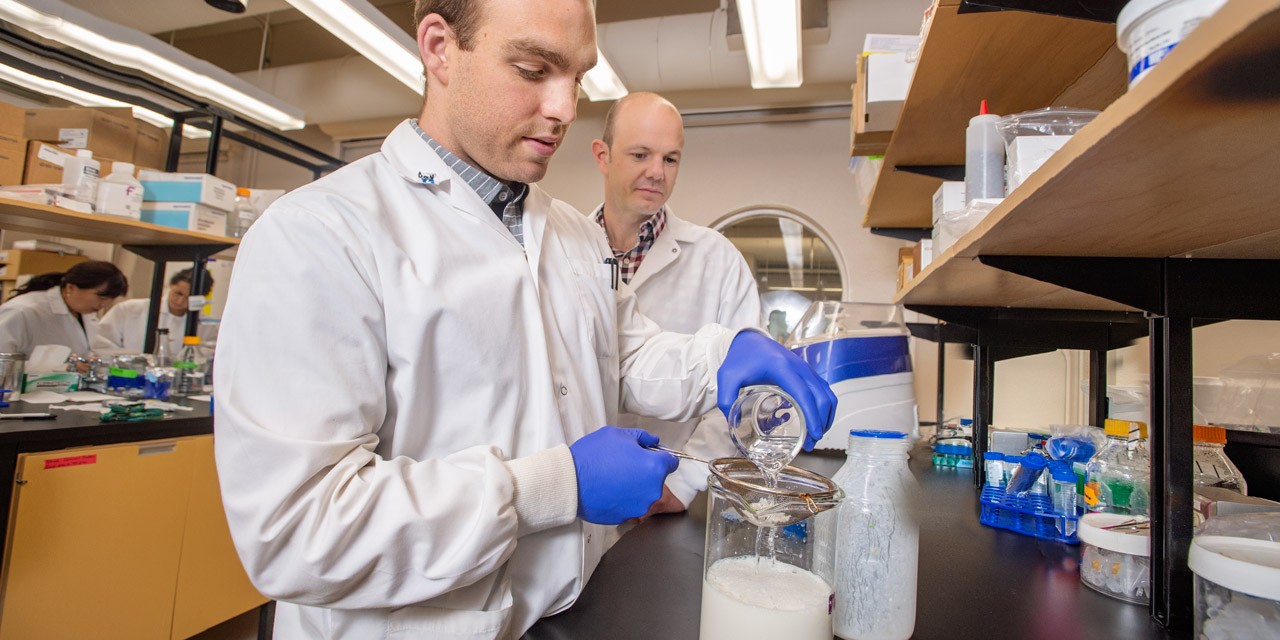 (From left) Researchers Ben Bourrie and Ben Willing developed a healthier recipe for kefir based on their research showing that traditional varieties of the fermented milk beverage had more health benefits than a store-bought brand available in North America. (Photo: Richard Siemens)

After testing the differences between traditional and store-bought kefir, a pair of University of Alberta researchers developed a healthier formula that could eventually find its way onto grocery store shelves.

“We’re building a better kefir,” said U of A PhD candidate Ben Bourrie who, along with microbiologist Ben Willing and a colleague from Ireland, compared four versions of traditional kefir from around the world to a commercially made brand available in North America.

They found that the old-world versions of the fermented milk drink, native to Eastern Europe and increasingly popular in North America for its health benefits, decreased weight gain by 40 per cent and cholesterol levels by 50 per cent in mice being fed a high-fat diet.

However, the commercial kefir they tested did neither.

The study suggests the bubbly, yogurty beverage could pack more of a health punch for people trying to choose more heart-healthy, lower-cholesterol diets.

“It’s positive to have a food that does that without requiring a pharmaceutical approach,” Willing noted.

They estimate about half a cup of traditional kefir per day is all that would be needed to get the dietary benefits.

According to the pair’s research, kefir is growing in popularity: the drink’s global market is expected by many analysts to grow at a compound annual growth rate of 5.8 per cent from 2018 to 2023, reaching a total of US$1.8 billion in 2023.

The difference between commercial and traditional versions lies in the kefir grain: “a microbial matrix” of bacteria and yeast resembling a pulpy white mass, much like a strain of sourdough, Bourrie said. In traditional use, the grain is dropped into milk—in this case cow’s milk—and left to ferment, then passed along for further use. It can also be used in other types of milk, including soy.

Commercial kefir is prepared the same way yogurt is made, with different bacteria from what’s used in traditional kefir. Nor do most commercial versions contain yeast.

“It’s a different fermentation process that is missing the traditional yeast and the bacteria,” Willing said. “What you’re getting in most available kefirs in the store is not going to have the same health benefits.”

Their discovery is currently in the patent process, and ultimately they hope their kefir formula will be used by industry for mass production, Bourrie said.

“We’ve come up with a cocktail of bacteria and four yeasts that are most common in traditional kefir. We can now grow those microbes and add them to milk, and it can be scaled up to use in commercial vats.”

Meanwhile, if you’re already buying kefir milk off the shelf, drink up. Even commercial kefir is rich in protein, thought to have anti-inflammatory properties and to help protect against cancer.

“There’s no reason to stop drinking it,” said Willing. “We just think it could be better.”

U of A researchers develop healthier recipe for store-bought kefir