U of A researchers move closer to ‘magic’ cancer treatment 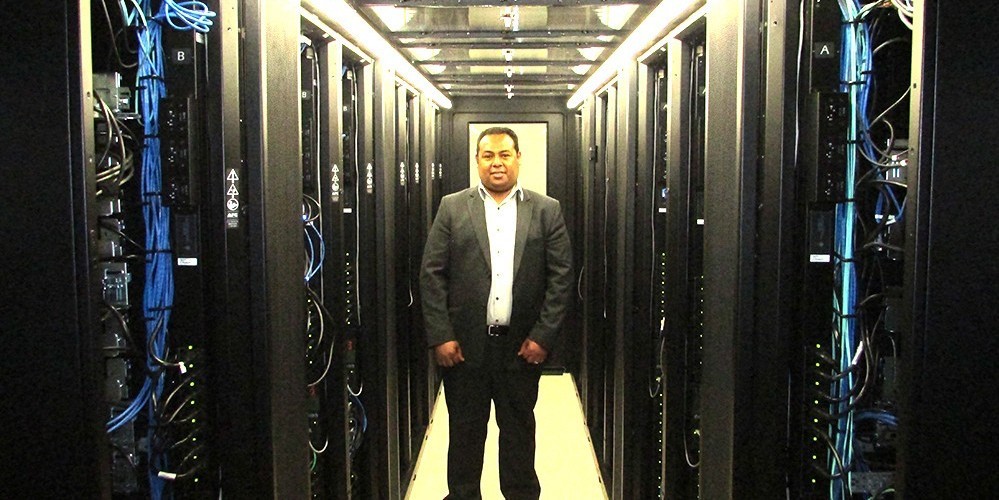 U of A researcher Khaled Barakat with the IBM supercomputer his team used to develop a small molecule that could help the body fight cancer by allowing the immune system to attack tumours. (Photo: Faculty of Pharmacy and Pharmaceutical Sciences)

Sound like magic? That’s because it kind of is, according to Khaled Barakat, a University of Alberta biophysicist searching for innovative immunotherapies that could help knock out multiple types of cancer simply by empowering the immune system.

Four years ago, Barakat announced the search for a “magic drug” thanks to a $5.4-million partnership with the Alberta Cancer Foundation and the Li Ka Shing Applied Virology Institute. With the help of a supercomputer and a dream team of cancer researchers, Barakat’s team has published a new study in Scientific Reports revealing a tiny molecule that could do just that.

“It’s a very potent molecule,” said Barakat. “It actually proves the concept. And thanks to a massive team effort, we’re also making very good progress on another molecule for a different target.”

“Think of the immune system as police,” Barakat said. “This is exactly cancer. There’s no police. All the cells will eventually transform from normal cells.”

The idea of using the immune system to fight cancer has shown a lot of promise.

In recent years, researchers have honed in on antibodies that override these “brakes” and reactivate the T cells. Research on two of these checkpoints, with an estimated therapeutic value worth billions of dollars, won a Nobel Prize in 2018. But although lives have been extended and discernible evidence of the disease has been wiped out for some patients, the approach hasn’t been without complications.

Because antibodies are large molecules, they can remain in the body for months, increasing the likelihood that the immune system turns on itself, targeting organs and tissues. Treatments also tend to be extremely expensive and difficult to administer.

Barakat’s lab has spent the past four years using an IBM Blue Gene/Q supercomputer—the equivalent of 60,000 desktop computers—to help engineer small molecules that could boost the immune system without harmful side-effects. The molecules are then synthesized and evaluated in real life by a diverse group of U of A researchers including chemists, immunologists, virologists and biochemists.

The new study singles out one of the most promising leads, a compound that turns on the immune system like an antibody used to treat melanoma by targeting the PD-1 checkpoint. Barakat said a second lead compound is under development that would target a different checkpoint known as CTLA-4.

Barakat noted the molecules would be flushed out of the body within a few hours, as opposed to weeks for traditional treatments. Because of their size, the molecules could penetrate deeper into tissues. Instead of being expensive to produce and store, they could be manufactured and sold in pill form.

The biggest benefit would be its wide applicability. Because the same immune checkpoints are found on many cancer types, a single drug could be used to combat melanoma, breast cancer, lung cancer, lymphoma and even brain cancer.

In the world of cancer research, magic still takes time.

Barakat and his team established a spinoff company to help move the lead chemicals from the lab to animal trials, a necessary step on the way to human trials. He’s working on grants and hoping to find a pharmaceutical company partner to set up “an army of chemists” to help his colleague, U of A chemist Frederick West, create two or three thousand analogues and derivatives to fine-tune the molecules.

These compounds could help determine the active features while improving solubility, potency and reducing toxicity, caused when a molecule blocks another pathway.

“It’s like solving a Rubik’s Cube. You’ve proven the concept, but you’ve got to get all the faces coloured,” Barakat said. “You should put 60 chemists to work on it right away, where in our case we have four or five.”

While researchers tend to be wary of big claims, Barakat thinks there’s plenty of potential for magic. As CEO of his spinoff company, he gave it a magical name plucked from his Egyptian ancestry: HEKA Therapeutics.

“Heka was the god of magic in ancient Egypt,” said Barakat. “Magic is challenging, but possible.”

U of A researchers move closer to ‘magic’ cancer treatment