U of A Ringette are Canada's golden girls—again 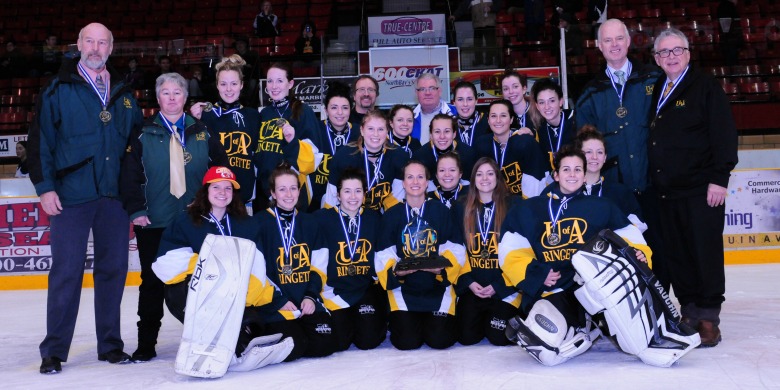 130110-ringettechamps-banner
U of A Ringette won its second straight national championship at the 2013 University Challenge Cup. (Photo: Brian W. Doherty)

(Edmonton) U of A Ringette struck gold once again after the team claimed its second straight national championship.

The repeat performance at the 2013 University Challenge Cup—capped off with a 4-1 victory over the University of Ottawa in the Jan. 6 final—has everyone on the squad “walking around with big smiles on our faces this week,” said coach Paul Hotke.

“It feels every bit as good or even better than last year,” said Hotke, after returning from the competition in North Bay, Ont. “We are a good team and winning it back to back validates that fact.”

Over the five-day tournament, the U of A went 7-0-1 in round-robin play. Their only setback—if you can call it that—was a 5-5 tie against the University of Calgary Dinos in the eighth and final game of round-robin, after the U of A had already secured a spot in the final.

“Game 8 wasn’t our most stellar performance—not to take anything away from the Dinos, they’re a very good team—but we kind of went through the motions,” said Hotke. “But when the girls came out for the next game, in the final, they were snorting and back to their usual preparation and doing what got them there.”

Third-year education student Taylor Clelland said the team felt the pressure to repeat, but as a tight-knit squad managed to rally together. Against Ottawa, they fought to the end despite a three-goal lead, she said.

“My first year, we won bronze and that was a big deal for the team, so to have won two national titles in a row now is incredible,” says Clelland. “To win it with 17 of your best friends for a second year is just awesome.”

The team’s dominant performance was due in large part to a strong overall team game, which Hotke credits to stability, with 16 of 18 players returning from last year’s championship squad. The lack of turnover resulted in one of U of A Ringette’s strongest teams with no glaring weaknesses or holes to fill.

“Whether it was goaltending, defence or forwards, we have a good team from top to bottom,” Hotke said. “For us as coaches, it’s a bit of a dream team at the moment with all the returning players and the strength we have.”

With another national championship under their belts, the team turns its attention to producing championship results later this month while hosting the fourth annual Ringette Scores on Cancer. The charity tournament has raised $250,000 for cancer research at the Cross Cancer Institute through the Alberta Cancer Foundation. With 19 teams from across Alberta and two from Saskatoon, U of A Ringette hopes to top last year’s donations of nearly $100,000, Hotke said.

U of A Ringette are Canada's golden girls—again
Newsroom