U of A Ringette renew battle against cancer 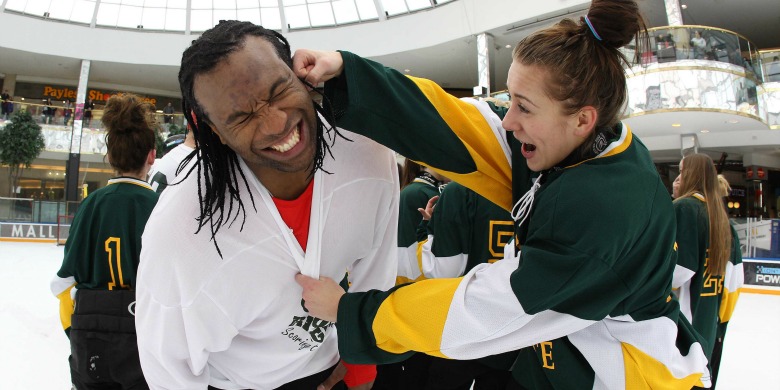 130124-ringettelaraque-banner
U of A Ringette look to deliver a knockout blow against cancer at the fourth annual Ringette Scores on Cancer. Last year's event raised $98,000 for cancer research and featured celebrities such as former NHLer Georges Laraque, pictured while clowning around with UAlberta's Dani Pronovost. (Photo: Perry Mah)

(Edmonton) U of A Ringette always has a game plan for victory. That’s how they compete on the ice and that’s also how they approach the fight against cancer for the Ringette Scores on Cancer charity tournament.

U of A Ringette hosts the fourth annual Ringette Scores on Cancer Jan. 25 to 27 at West Edmonton Mall. The first three raised $250,000 for cancer research at the Cross Cancer Institute through the Alberta Cancer Foundation, and the reigning national university ringette champions are determined to better last year’s result of $98,000 and break six figures.

“I think we’ll actually do it this year,” says Chelsea Morin, a fourth-year mechanical engineering student who is eyeing a career in medicine. “We’ve been so close the last couple of years, and the girls have rallied together to put in that extra effort as a team to make sure we reach it.”

Players from participating teams must raise a minimum of $100, and with 21 squads participating from Alberta, Saskatchewan and B.C., Ringette Scores on Cancer IV will be bigger, livelier and—if it’s even possible—more fun with new features such as an expanded fun zone, larger raffle table and on-ice competition until 11 p.m.

Morin personally looks forward to facing off against former National Hockey League players such as Rob Brown, Louie DeBrusk and Jason Strudwick, and other athletes and local personalities for the annual media/celebrity game.

But aside from good fun, Morin says the ultimate win is helping cancer research, which for her has personal meaning. Her late uncle, Peter Willette, received excellent care at the Cross after being diagnosed with leukemia before going into remission for five years. He eventually lost his battle in 2009.

“He fought so hard until the very end, and all of the doctors and nurses at the Cross were so supportive and so great to be around the whole time,” Morin says. “I don’t think we could have picked a better organization to help out.”

Coach Paul Hotke says it’s a privilege to work with a team of 18 post-secondary students so committed to community and helping a great cause.

“This is a major undertaking for 18 girls, and for them to be able to say we put on an event and ran it completely on our own without any help from anyone else, and at the end of the day walk over to the Cross with a cheque for $100,000—there’s not one of them on the team that isn’t bursting with pride about that,” he says.

U of A Ringette renew battle against cancer