U of A student helps organize virtual ultramarathon 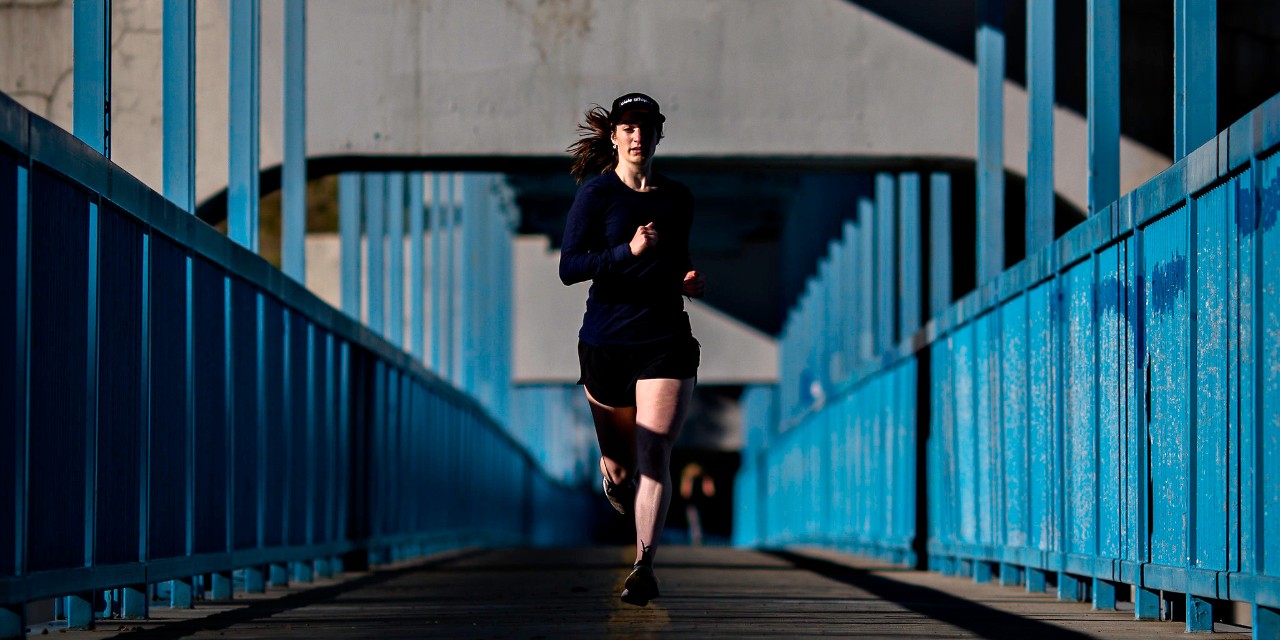 Sara Szabo, a long-distance runner and U of A master's student in exercise physiology, teamed up with friends to host a virtual ultramarathon to raise funds for two local organizations. (Photo: Jody Bailey)

When travel bans and limits on crowd sizes were imposed due to the COVID-19 pandemic, ultramarathoner Sara Szabo’s entire race season, from the London Marathon to a trail race in Rossland, B.C., was over before it began.

“It was sad, even though it was the safest and smartest decision, because you work hard to train for something like that,” said Szabo.

She wasn’t alone. Runners around the globe were affected by cancelled and postponed marathons and races.

Szabo, a University of Alberta master’s student in exercise physiology, had given up on the idea of competing this summer when a community planner with Arcteryx West Edmonton reached out to people in the local running community to discuss opportunities to collaborate.

That was the push Szabo and her friends Conor Furey, Laura Swain and Hadley Mann needed to start imagining what was possible.

Szabo said what they thought about was how often runners participate in events outside of Edmonton.

“But there could be more happening in our own city, given what a great river valley and trail system we have,” she said.

So they decided to host their own virtual race.

They started brainstorming and organizing, while considering social distancing regulations and risk mitigation.

The race they ended up planning is the North Sun Ultra, a 50-kilometre ultramarathon that will take participants throughout a large swath of Edmonton’s river valley. As trail runners, they especially liked the chance to encourage and empower others to use the river valley and trail system.

Szabo describes the route as “choose your own adventure.” She and the other organizers chose five segments of single track trail spanning from Gold Bar to Terwillegar parks that must be completed, but participants can connect those sections as they choose, making sure their complete route adds up to 50 kilometres. Racers track themselves using GPS technology.

“We settled on not having a structured route because if you tell someone to run a certain trail it can be hard to navigate. If it’s not flagged you’d have to have your phone out the whole time making sure you’re following the route. This also provides flexibility and allows people to be creative,” Szabo explained.

Having participants feel connected and contributing to a sense of community were of the utmost importance to her and the other organizers, said Szabo.

“Community is such a big component of the culture of trail running, and in Edmonton we have a really great running community in general; that’s such an important value,” she said, adding that the North Sun Ultra strives to serve the community in a few unique ways.

The race itself is completely not for profit, and the proceeds from runners’ registration fees go to two community organizations: Boys and Girls Club of Edmonton, and the Edmonton Mountain Bike Alliance.

Boys and Girls Club was chosen for the support they provide to diverse populations across Edmonton, and the Edmonton Mountain Bike Alliance was chosen because of the work the group does to maintain Edmonton’s trail system.

“Mountain bikers build (the single track trails) and maintain them, so we really wanted to emphasize the need to be respectful of mountain bikers on these trails, and of the work that goes into the maintenance and sustainability of the trails themselves,” said Szabo.

The race is also untraditional in that it really isn’t about finishing times, she said. The prizes, donated in large part by local companies, aren’t only for the fastest runners. They’re also for the best picture taken, and for the most litter picked up along the trail.

“If you ask any runner, they’ll probably tell you they run for joy and adventure and to push their boundaries. And that’s what we wanted to emphasize.

“We just wanted to encourage people to go out and treat it like a day of adventure in your city.”

U of A student helps organize virtual ultramarathon